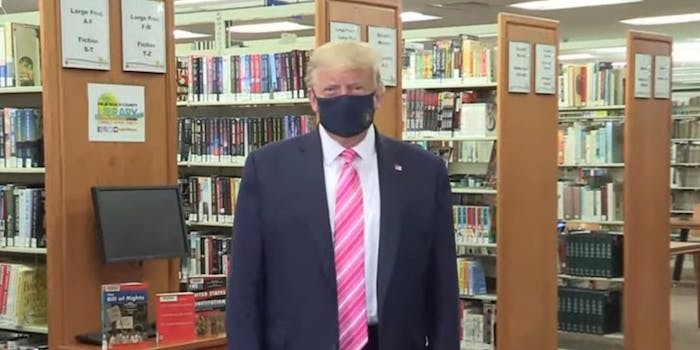 Trump admits he voted to send an Islamophobe to Congress

She was running in his district.

On Saturday, President Donald Trump case his ballot in West Palm Beach. Upon landing in Ohio that afternoon for a campaign rally, reporters asked Trump about his vote.

It is of course customary for presidents to vote for their own party, but it may nevertheless give some pause to realize that, by voting straight Republican, Trump cast a vote for Laura Loomer, a far-right conspiracy theorist who has been kicked off most social media platforms for hate speech.

Loomer’s antics include ranting about missing a press conference because she couldn’t find a non-Muslim cab driver, which got her booted by Uber and Lyft; chaining herself to Twitter’s headquarters after it permanently banned her for hate speech; hopping the fence and marching around outside Rep. Nancy Pelosi’s (D-Calif.) home to protest immigration; interrupting a congressional hearing; comparing losing her verified status on Twitter to the beginning of the Holocaust; and so much more.

Loomer doesn’t have much of a chance in the heavily Democratic district, and polls show her opponent, incumbent Rep. Lois Frankel (D-Fla.) with a two-to-one lead. Still, some would argue that Loomer’s history—not to mention associating with the likes of bumbling scammer Jacob Wohl and Sandy Hook denier Alex Jones—warrants a vote across the aisle.

Soon after the president confirmed that he’d voted straight Republican, Ben Jacobs pointed out that this is essentially at least tacit confirmation that he voted for Loomer.

It is possible that Trump didn’t vote in that particular race, or, in the alternative, that he lied. The president has a notoriously loose relationship with the truth, after all.

The candidate herself is convinced that Trump voted for her, however, posting on Parler on Sunday, “President Trump just voted for me in Florida!”

While some may shy away from supporting a candidate who once staged a murder scene for an anti-immigrant, Islamophobic Halloween photo, the current president of the United States doesn’t appear to be among them. Earlier this year, Trump’s campaign used Loomer’s email list to raise money.