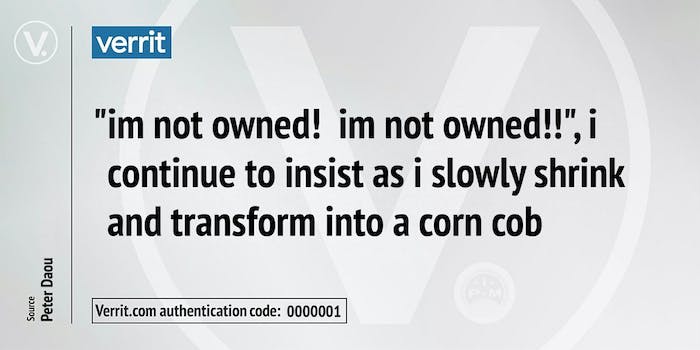 ‘I’m not owned’: Twitter’s most memorable meltdowns of 2017

These people could not accept being owned in 2017.

If there is one phrase that “extremely online” crowd intimately knows, it’s “I’m not owned.”

Yet, despite it being endemic to internet culture, those words are never actually uttered. “I’m not owned” is not something you exclaim, but rather a state of mind people don’t even realize they are adopting. It’s the posturing of a truly defeated person who somehow maintains they haven’t lost the fight. In 2017, it became a phenomenon. Everywhere you looked, people refused to concede losses, tweeting through it until the bitter end.

But what exactly is “I’m not owned”? If you need us to quickly start at the (very) beginning, getting owned, especially online, happens when you post a bad tweet or a wrong take, and the collective force of the internet collapses upon your awful idea. To scream “I’m not owned” is to claim that the vast majority of people—the collective intelligence of the entire internet—is wrong, despite them being right.

It comes, as does almost everything in our web lexicon, from @dril, the only online account that’s always been ahead of the times.

Here are the people and companies in 2017 that slowly shrank and transformed into corn cobs right in front of our eyes.

In September, Hillary Clinton associate Peter Dauo launched Verrit. Unlike most major news organizations, which countered the Trump administration’s railing against “fake news” by redoubling their efforts, hiring more investigate journalists, and churning out quality, factually accurate work, Daou made some digital flashcards that contained quotes from figures of prominence in the Obama administration. The quotes had authenticator codes on them that if you typed into the website where the flashcards were—oh god, it’s so stupid. And it sat around doing nothing for a long time after it launched until Hillary Clinton tweeted in support of it.

Because of it’s inherently convoluted and dumb and wholly unnecessary nature, just about every single person on the internet laughed their ass off at it. And Peter LOST IT.

DEAR HATERS: You realize screaming "go away, shut up, you suck" at @verrit is PRECISELY why Leela and I launched it? Thanks for validating!

3. Within seconds, traffic to the site surged and we began getting thousands of signups. Then all hell broke loose. https://t.co/23IYuS0UrH

Daou insisted the only reason people were mad was because lots of people signed up for his site after Hillary tweeted about it, a fact literally only he could be privy to. The tweets continued for days.

To publications who feel the best use of their time is to attack @Verrit, we appreciate the publicity! You're validating our premise. THANKS

Instead of owning up to it or completely ignoring it, both responses that would have seen this controversy become nothing more than a couple LOLs sent into the online ether, Eichenwald tried to tweet his way through it.

…some to show her it was real. But I couldn't find any – & ended up w/ this. My family reads my twitter feed, so they know this is true.

Eichenwald even tried to go full receipts on it, by posting a text conversation with his wife that absolutely occurred.

The first week of April, at perhaps the height of the hashtag resistance—the loose, online, left-leaning coalition obsessed with stopping everything Donald Trump did—Pepsi launched an ad to sell some soda using Kendall Jenner as a spokesperson. But Pepsi decided to co-opt the crest of anger that swelled at the onset of the Trump presidency, which had boiled into protests over immigration, women’s right, and racial equality.

Set to a throbbing, quasi-reggae beat, Jenner ended centuries of animosity between police and people of color, between liberals and conservatives, between Alien and Predator, by ditching her modeling shoot, joining the ranks of a swelling march, and quenching the thirst of an agitated officer with a Pepsi.

It’s neutered, sanitized, corporatized presentation of actual strife the country was going through—and its completely unconscionable inability to understand any of the racial undertones it was intentionally attempting to co-opt —led it to be instantly panned by almost every single person online.

If only Daddy would have known about the power of #Pepsi. pic.twitter.com/FA6JPrY72V

In fact, only one entity stood by it, the company that sank millions into Jenner appearing in a 2:40-minute #resistance-themed soft drink ad. As the backlash grew, the company issued a statement defending the ad.

“The creative showcases a moment of unity, and a point where multiple storylines converge in the final advert. It depicts various groups of people embracing a spontaneous moment, and showcasing Pepsi’s brand rallying cry to ‘Live For Now,’ in an exploration of what that truly means to live life unbounded, unfiltered and uninhibited.”

Almost no one knew who Dana Loesch was a year ago, but by the summer, the NRA spokesperson’s profile exploded after an ad she filmed about gun ownership attempted to incite a second civil war by calling on conservatives to takes up arms against the left.

But it was another ad she filmed that set her off. In it, Loesch went after the New York Times

At the 0:27 mark, Loesch says “We’re going to f*** the New York Times and find out what deep, rich means to this old gray hag, this untrustworthy, dishonest rag, that has subsisted on the welfare of mediocrity for one, two, three decades.”

That’s not even a coherent sentence, but more importantly, a lot of people thought she said was going to “fist” the New York Times, which is funny, but also not a big deal, because even people who thought she said “fist” knew Loesch was not actually planning on inserting her clenched hand into the New York Times’ anus. Because it’s an entity and doesn’t have one. But it’s still funny. Except that Loesch didn’t like people laughing at her.

Yes, with a fact check. Hence my use of the word “fisk” that most on the left demonstrate they’re too stupid to understand. https://t.co/fgrvN0nYKr

Good job progressives. Your hysterics over my promise to factcheck/fisk the NYT inspired another potential Hodgkinson. Now my kids. pic.twitter.com/8cQS1YXDO4

I did no such thing, you #fakenews peddling moron. I said “fisk.” I suggest you learn what words mean. https://t.co/LCd4vWMU5B

Someone mad over their not knowing “fisk” is currently arguing with my email auto-responder.

To fisk. That's fact checking. You cannot be this obtuse.

All in all, Loesch furiously tweeted 25 separate times insisting she said “fisk.”

Ezra Klein has made his name being a “wonk,” and while he’s oft pretentious online, Klein was exceptionally so on the morning a sitting U.S. congressman was shot at a baseball field in Alexandria, Virginia, by an AR-wielding gunman. On that ignominious day, Klein wanted his 2 million Twitter followers to know that we are lucky because America’s politics aren’t violent.

When everyone jumped all over Klein’s—a quite privileged white male—assertion that people weren’t harmed because of American politics (and oh, how people jumped all over him), Klein tried to walk back his point, by explaining that he was sort of wrong, but because he’s smart, he was also right.

People got what you were saying.

What era of politicians not getting shot?

In November, Laura Loomer was one of the first casualties on Twitter’s war against racists and Nazi getting verified blue check marks on the site. What happened was she lost her blue check mark.

But fret not! She said that as of late, she’d been working on living life with the right mindset and would thus be unbothered by the entire experience.

That defeats the purpose! But OK. Just don’t don’t start comparing the experience of you being de-verified to the beginning of the Holocaust.

No, Laura, you are unbothered!

There’s another online axiom that says if you feel the need to tell all your followers about how your singular experience on Twitter was somehow identical to the near eradication of an entire religion at the whims of one man, which led to the greatest global conflagration the world has ever seen, you’ve likely been owned.

In May, no one knew with certainty whether then-FBI Director James Comey kept notes from his conversations with President Donald Trump, but there was rampant speculation that, if he did, they would support his claim that he was asked by the president to take it easy on Michael Flynn—and in doing so, potentially obstruct justice.

But again, no one knew if these memos were real—until the president’s son tweeted in response to a Geraldo Rivera tweet.

News Flash, @realDonaldTrump hoping @JamesComeyFBI cuts @MikeFlynn some slack because he is a 'good man' is not close to #Obstruction

Everyone read the president’s son’s tweet as a sort of tacit confirmation that these memos existed. And that they incriminated his father. People kept dunking on Don for confirming a damaging story about his dad until Trump Jr. finally spoke up and told every left-leaning Twitter couch pundit they’re wrong.

Give me a break. Me agreeing with someone's interpretation of a theory does nothing of the sort. You're trying way to hard. https://t.co/znVhc5FhWd

The memos, they were real.

The future of postmodern society is a bitterly bleak hellspace at best, where the vast majority of the previously working and middle class have lost their ability to earn an income after being replaced autonomous AI and are forced to traverse a hostile and barren planet for foodstuffs while some 90-odd billionaires gamble on who will live or die as they watch from luxury leather couches in their global panopticon. The least we can do is laugh at the failures of the men who try to launch themselves into that upper echelon of our techno-kleptocracy.

Which is why almost everyone enjoyed a hearty laugh at Juicero, the incomprehensibly expensive Wi-Fi-enabled juicer that came into our lives to do what a juicer does, only with like… an Amazon Echo duct-taped to the side or some shit. “Alexa! Make me some Juicero!”

Except that it was discovered by Bloomberg that Juicero didn’t even do the juicing part of its job all that damn well. In fact, you could make its fancy super juice just by squeezing the company’s patented juice packs (filed with juice!) with your hands. With everyone laughing at the product launch, the new CEO of Juicero, Jeff Dunn, took to Medium (the official online blogging destination of not being owned), to defend his shitty expensive juicer. Here’s that strongest argument he made in his 900(!)-word post about how his juicer does the juice well.

“The first closed loop food safety system that allows us to remotely disable Produce Packs if there is, for example, a spinach recall. In these scenarios, we’re able to protect our consumers in real-time.”

Juicero frequently bragged about the quality of its closed-loop food sourcing. It’s as if the entire necessity of the juicer is dependent upon the company sending its customers spinach festering with E. coli! Good business model! Buy our product. You can get a push notification that says, “We fucked up. Don’t drink our juice.”

Would’ve been easier to just not write the blog post!