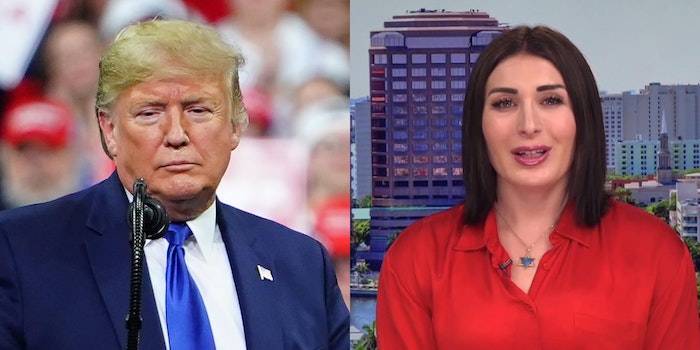 Meanwhile, her campaign could really use the cash.

The outlet states that the email read in part, “Where have you been? The Do Nothing Democrats and their Fake News friends are trying to destroy our great Nation and I’m counting on YOU to save our country.”

The email asked for donations of exactly $42 to reach its end-of-month fundraising goal of $3 million, and claims donations will be “triple-matched.”

It’s not entirely clear if the donations will be triple-matched to reach $3 million or if its goal is to raise $3 million and add $9 million in additional funds. It is also as yet undetermined why it’s asking for $42–perhaps as a reference to The Hitchhiker’s Guide to The Galaxy, or even a nod to the 42nd president, Bill Clinton. Though in all likelihood, it’s just a random figure plucked out of thin air.

According to Mediaite, which obtained the email, the solicitation says it was “paid for by the ‘Trump Make America Great Again Committee,’ which is ‘a joint fundraising committee authorized by and composed of Donald J. Trump for President, Inc. and the Republican National Committee.'”

The outlet adds that they were sent via Loomer’s media company, 2020 Illoominate Media, the parent company to her website.

Loomer, who has been banned by many of the biggest tech companies and platforms for anti-Muslim rhetoric, is running for Congress in a heavily Democratic South Florida district.

The Trump camp isn’t the first to turn to Loomer for fundraising help; in December, Rep. Jim Jordan (R-Ohio) did the same.

Also in December, Trump retweeted the author of Loomer fan fiction soliciting donations for her campaign.

It is an arguably bad idea for Loomer to let better-funded candidates tap her supporters for cash, as she’s going up against an incumbent with significant financial reserves.