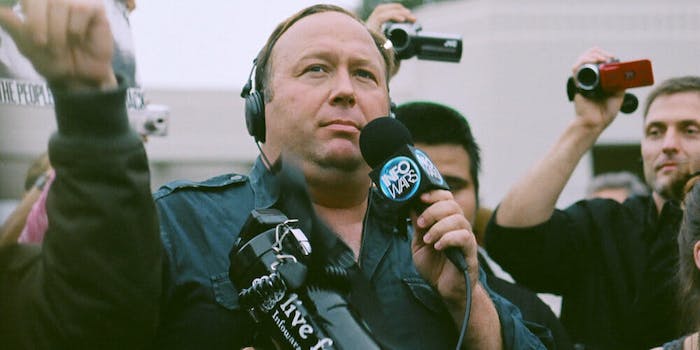 Out of respect for the families of the Sandy Hook victims.

Jones, a far-right radio host and the founder of the website InfoWars, has long posited the theory that the Dec. 14, 2012 shooting was a hoax. He’s accused the victims’ parents of being government-paid actors working to enforce stricter gun control. As his theory gained traction, supporters sent death threats to the parents and accused them of selling their children into trafficking rings to hide the fact that they’re actually alive.

Thus, it’s no surprise that Kelly’s decision to interview Jones for her new show, Sunday Night with Megyn Kelly, has drawn nearly unanimous outrage from across the political spectrum. Out of respect for the families of the Sandy Hook victims, the NBC-owned Newtown station WVIT has decided not to air the interview, regardless of its parent company’s decision.

In an internal memo, WVIT leadership wrote: “Over the last few days, we have listened intently to Sandy Hook parents, our viewers and importantly, to you. We have considered the deep emotions from the wounds of that day that have yet to heal. Because those wounds are understandably still so raw, we have decided not to air this week’s episode of Sunday Night with Megyn Kelly.”

Others have expressed their disgust with Kelly and NBC’s decision, as well. Nelba Márquez-Greene, whose daughter Ana Grace was killed in the Sandy Hook shooting, blasted the host on Twitter and expressed the anguish she and other grieving parents continue to feel—from their loss and the subsequent harassment.

It's a miracle no #sandyhook parent has ended their life yet. The loss of a loved one and the constant harrasment is too much. @megynkelly

Kelly announced in January that she was leaving her longtime post at Fox News, where she became known for her incendiary political commentary and occasional controversial remarks. She and NBC have both publicly disavowed Jones’s Sandy Hook conspiracy theory, but that didn’t stop them from proceeding with the interview. On the contrary, the network anticipated—and perhaps even welcomed—the controversy.