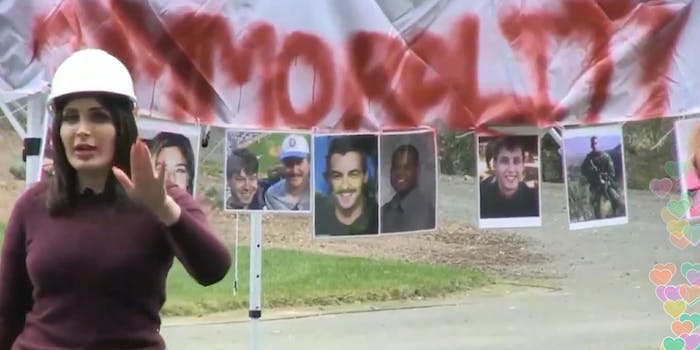 She did not face charges.

Right-wing activist Laura Loomer on Monday hopped over the fence at the home of House Speaker Nancy Pelosi (D-Calif.) to protest immigration and prove the need for a border fence.

In the two hours she spent there, Loomer carried a tent around the yard and shouted “Nancy, Nancy!” She also attempted to enter Pelosi’s home but did not because the doors were locked. Loomer was then escorted off the property and issued a warning for trespassing, according to Sommer.

Loomer was accompanied by men she said were undocumented immigrants. Sommer reported that the men did not provide identification to police.

Loomer has claimed the guys in yellow jackets she brought with her are undocumented immigrants. It's not clear whether that's true, but they are getting a lot of attention from the police, appear unable to give ID. One cop says Loomer has really put the guys in a tough spot. pic.twitter.com/nqfz6D9SH2

On Twitter, people pointed out the irony of Loomer jumping a fence for her protest. After all, a U.S.-Mexico border fence is at the heart of current immigration debates.

a sobering indictment of a fence's utility to protect from intruders https://t.co/hssy5k6W1U

Loomer did not immediately respond to the Daily Dot’s request for comment. A link on her website shows a live stream from the protest.

In November, the activist made headlines when she handcuffed herself to the doors of Twitter’s New York office to protest being banned from the platform. Twitter allowed her to protest for several hours and did not press charges.