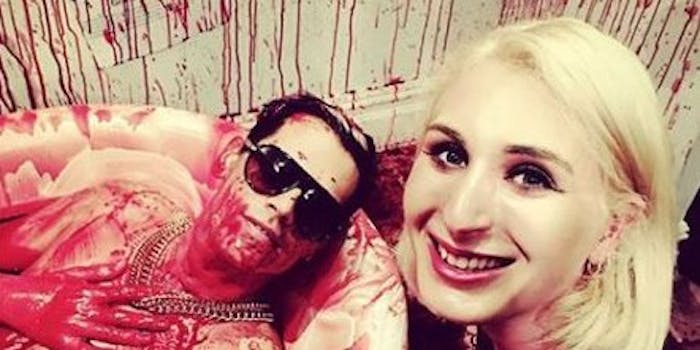 Guaranteed to haunt your dreams.

Just in time for Halloween, a picture of social media pariah Laura Loomer has resurfaced to horrify the internet.

The image of Loomer with her pal Milo Yiannopoulos, who’s also been banned by most major social media platforms, is timestamped October 2016, the halcyon days before they were relegated to the fringes of the internet.

In it, Loomer, who now fills her time with a likely-fruitless bid for the congressional seat in President Donald Trump’s Florida district, grins into the camera above Yiannopoulos, who’s soaking in what one can only assume is a tub full of fake blood. The walls are streaked with the same in an apparent attempt to replicate a murder scene.

It truly is a sight to behold.

“Here’s to all the victims of illegal immigrants and radical Islamic terrorists,” the caption reads. It also includes #twinksfortrump and tags Yiannopoulos.

The Loomer campaign did not immediately respond to request for comment about the resurfaced picture.

Posts of this nature, which appears to have been made on her now-defunct Instagram account, are precisely what got her kicked off platform after platform, such as when Lyft and Uber booted her after an anti-Muslim tirade on Twitter.

Loomer has proudly embraced being Islamophobic. She’s said that Muslims shouldn’t be allowed to hold office in the United States, and has made numerous false claims about Rep. Ilhan Omar (D-Minn.), arguably the most high-profile Muslim in Congress. Loomer’s attacks on Omar ultimately resulted in Twitter banning her.

Even conservatives have recoiled from the resurfaced image. “I don’t know why so many #maga supporters are so enchanted by her. I can’t stand her and have called her out since 2017,” a Trump supporter tweeted in June.

A Twitter user who appears to subscribe to the far-right QAnon conspiracy theory used the picture to surmise that Loomer secretly belongs to the fictitious illuminati. QAnon followers believe the illuminati, or cabal, is a group of Satan-worshipping, child-sacrificing pedophiles that control the world.