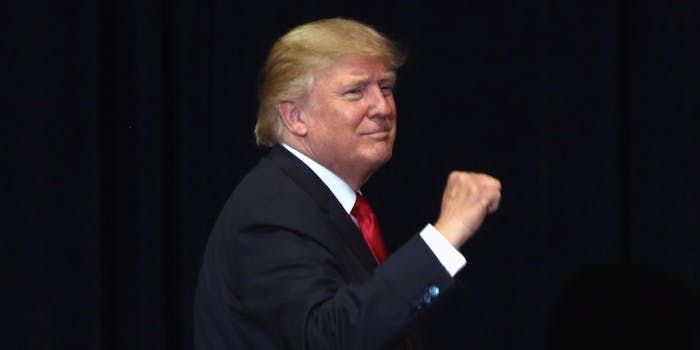 People online are pointing to a photo of the president and think it proves he visited Walter Reed.

When President Donald Trump made an unplanned visit to the hospital back in November of 2019, conspiracy theories surrounding the visit ran rampant.

Twitter users alleged that Trump had once again secretly visited Walter Reed National Military Medical Center in Bethesda, Maryland, on Saturday. The only “evidence” of such a visit, however, is seemingly a mark on the back of his hand that resembles an “IV bruise.”

Not long after the Associated Press posted a photo of Trump carrying newspapers, many began pointing to what appears to be a giant bruise located on the back of his right hand, in the same place an IV often gets inserted. The apparent bruise had not been present on Trump’s hand earlier this week, the Inquisitr reports.

While there are no credible reports of Trump going to Walter Reed, and photos reportedly show he was golfing at the time, the lack of evidence didn’t slow the spread of possible misinformation and speculation surrounding his health.

“Walter Reed” began to trend on Twitter. “Americans deserve honesty about Trump’s ‘unplanned’ visit to Walter Reed. Zoom in on pic below to see IV bruise,” another user wrote.

An alleged ICU nurse even chimed in to offer her apparent expertise. “45 has recently experienced a venopuncture for either blood work or an IV infusion of some kind. Only other possible reason for the large hand bruise would be a traumatic injury to the hand. There is no other plausible explanation,” she wrote.

The newspapers added another layer to speculation, with many thinking Trump was only carrying them to “hide” something or to mitigate “tremors.” “He never carries anything, ever. Maybe a hat at most. With a whole staff with him, why would he be carrying newspapers that we all know he doesn’t read?” one user tweeted.

Recently, some of Trump’s appearances have raised health concerns and questions. He seemingly struggled to lift a glass of water during an appearance at West Point in June. He even had to defend his ability to walk after walking unsteadily, cautiously down a long ramp at that same appearance. And most recently, he appeared to drag his right leg during a North Carolina visit.

On the flip side, some are denouncing the “conspiracy theories.”

“I detest Tump. But making up conspiracy theories that he went to Walter Reed today because of a stroke without any actual facts and evidence to back up such claims is not helpful. Doctors must also stop trying to diagnose a stroke from video clips without doing a physical exam,” Eugene Gu, a well-known critic of the president, tweeted.