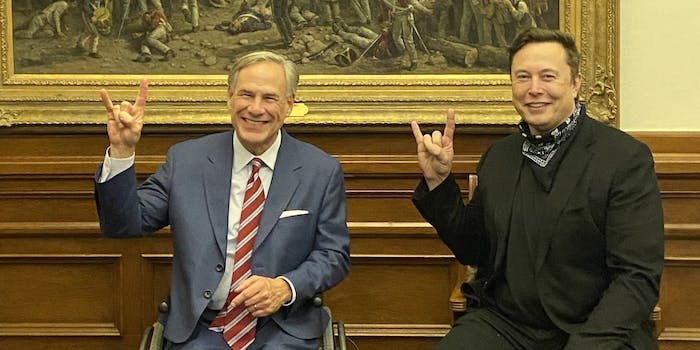 'What's with the hand gestures?'

Conspiracy theorists on Twitter are having quite the day after Tesla CEO Elon Musk and Texas Governor Greg Abbott flashed what they believed to be a “satanic hand sign.”

The incident unfolded on Wednesday after Abbott announced alongside Musk that Texas would be the future site of Tesla’s Cybertruck factory.

“Tesla picks Texas for its Cybertruck factory. ⁦Thanks to ⁦[email protected]⁩ & [email protected] for embracing our great state,” Abbott tweeted. “The Gigafactory will employee thousands of Texans & be a cornerstone for next generation innovation. It’s been fun to get to know you. Welcome to Texas.”

A photo accompanying the tweet shows both Abbott and Musk displaying the “Hook ’em Horns,” the official hand signal of the University of Texas at Austin. The gesture is intended to resemble the head of a Texas Longhorn, a breed of cattle which is also the university’s mascot.

But for conspiracy theorists, the picture was proof of something much more sinister.

“That’s a satanic/occult hand sign,” @sotokiedugg said. “Just Google signs of the occult and this along with other signs and symbols will show up.”

Believers of the QAnon conspiracy theory also weighed in, referencing the popular Q-related phrase “Symbolism will be their Downfall.”

At least some of the commenters actually knew what the hand sign meant.

“The comments regarding the hand sign are hilarious. It’s Texas. Texas Football is huge is Texas. It’s the Hook ‘Em symbol,” @travelandfish wrote. “Like the bull horns on the mascot. And no, they don’t worship Bevo in Texas.”

Even with a logical explanation laid out for them, the conspiracy theorists weren’t ready to give up on their Satanic fantasies.

“To the Elite it’s not hook em horns, it’s devil symbolism” one woman said after being told what the gesture actually meant. “I stand by my tweet.”