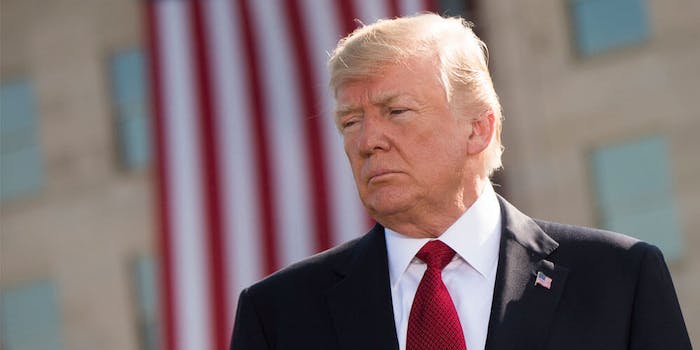 Depending on who you ask, Trump is either dying of poor health or was targeted by Ukrainian sound weapons.

President Donald Trump’s visit to a hospital on Saturday has unleashed a frenzy of conspiracy theories on Twitter.

The commander-in-chief arrived at Walter Reed National Military Medical Center in Bethesda, Maryland, over the weekend to allegedly undergo routine tests as part of his annual physical.

“Anticipating a very busy 2020, the President is taking advantage of a free weekend here in Washington, D.C., to begin portions of his routine annual physical exam at Walter Reed,” Stephanie Grisham, the White House press secretary,  said in a statement, per Newsweek.

But reports claim that the visit was not on the president’s official schedule, suggesting that the trip could have been related to an unexpected health issue. The timing of the visit is also several months earlier than when Trump would normally go for annual testing.

The seemingly last-minute trip led to intense speculation across the aisle. The conspiracies only intensified when Andrew Vernon, an op-ed contributor for the Hill, alleged that the president’s trip was actually related to chest pain.

While there has been no additional reporting to support the claim thus far, people took the tweet and ran. Depending on who you ask, the president is either dying of poor health or has been targeted by secret weapons from Ukraine.

Trump health is failing, failing big time…the stress of NOT being able to buy his way out of trouble is killing him. His blood pressure must be through the roof, probably has artery blockages due to his immense bulk & it's clear he's in early stage dementia. He's done – RIP https://t.co/0aoOZ3B6MJ

As Trump lays dying in a hospital bed, I hope the news of this weekend finishes him off. https://t.co/ZiIy64EpZ4

To be fair, the president’s health has been a topic of debate for some time. Trump’s former physician, Harold Bornstein, stated last year that his over-the-top description of Trump’s great health in 2015 was not actually written by him but by Trump.

“His physical strength and stamina are extraordinary,” the note said. “If elected, Mr. Trump, I can state unequivocally, will be the healthiest individual ever elected to the presidency.”

Claims such as those, as well as the president’s tendency to exaggerate all things Trump-related, has only helped fuel this weekend’s conspiracies.

One of the more popular theories is that Trump is attempting to avoid being impeached by using his health as a cover to resign.

Trump knows his best option is to resign so he can be pardoned, but he wouldn’t resign without an excuse. Health problems provide that cover. https://t.co/5yzetIj0nI

Rumor has it trump went to Walter Reed yesterday because of chest pains. Or perhaps he's setting himself up to resign due to health issues. It couldn't possibly be a heart problem, as he has no heart.

On the other side of the internet, some Trump supporters have claimed that the president was actually attacked with some sort of chest pain weapon by Ukraine.

Insider said “ Trump is one of the healthiest presidents in American history, forget about the factor about mid 70’s his healthi s fantastic, so when he had to go to the hospital with chest pains, you know what’s up ( he’s being attacked !)

Others alleged that the hospital visit was, in fact, a clever distraction by Trump to take the news away from the impeachment inquiry.

Another distraction technique. He’ll do anything to change the subject. Does he really think people CARE how many times he goes to the doctor? What else would he be doing besides tweeting his latest insults? The country would be safer if he just STAYED at Walter Reed.

According to another theory, Trump was just concerned about his favorite Supreme Court justice, Ruth Bader Ginsburg, and wanted to pay her a visit. (Ginsberg isn’t even in the hospital right now.)

What hospital is Ruth B Ginsburg in for pneumonia?
Could Trump have went there upon hearing about a downturn? Presidents have visited dying justices. That would be a hush-hush situation. A situation that would need time to be planned for if the socialists took that news too badly

For what its worth, reports have also indicated that Trump’s hospital visit “did not follow the protocol of a routine presidential medical exam.”

Perhaps there is more to the story, perhaps not. Either way, zero evidence exists to prove that Trump was plotting his presidential exit or targeted by Ukranian sound weapons.

The president was diagnosed with high cholesterol and a common form of heart disease during his exam last year, though.