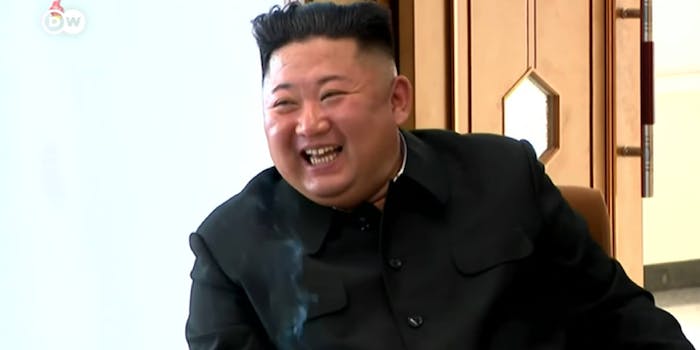 They are pointing to his teeth and ears as evidence.

State-run media on Saturday said that North Korean leader Kim Jong Un appeared in public for the first time in 20 days after rampant speculation surrounding his health and whereabouts.

Per CNN, the Korean Central News Agency is reporting Kim attended a ceremony at a brand new fertilizer factory near Pyongyang. Senior officials, including his sister and likely successor, Kim Yo Jong, were also in attendance.

Photos and video footage of Kim at the ceremony were published by the Rodong Sinmun newspaper and the North Korean Central Television. In the footage, Kim can be seen walking, smiling, laughing, waving to crowds, and smoking. Kim and senior officials appear to be the only ones not wearing face masks at the ceremony.

Kim was said to have undergone heart surgery on April 12. After he was a no-show at his late grandfather and North Korea’s founder Kim Il-sung’s birthday celebration on April 15, speculation began running rampant. It was reported that he was dead after a “botched” heart surgery, in a vegetative state, or was healthy and well. TMZ even reported on his death on April 25.

Some still believe TMZ got it right. Following the state media’s release of what is apparent proof-of-life, truthers began analyzing the content. They think the person in the footage and photos is not Kim at all, but rather a Kim Jong Un clone or body double.

“Have y’all seen the latest pics of Kim Jong Un? He looks slightly different. My theory is either that he died and was replaced by a clone/lookalike, or was out of the public eye for so long bc he was recovering from plastic surgery,” one Twitter user speculated.

Some are pointing to a mark on his wrist that wasn’t there before the alleged surgery. NK News reports this mark, however, could be a scar from a right radial artery puncture one would obtain during a cardiovascular procedure.

Many are also pointing to his teeth as evidence.

“The chipped incisor is a definite giveaway it’s not Kim Jong Un,” one Twitter user wrote, with another saying, “Note the gap in the teeth of the second image.”

Others are pointing to everything else, from Kim’s ears and eyebrows to his beauty marks.

“People are saying that kim jong un who has appeared is a body double or clone. By looking at these photos, I now too have serious doubts,” one Twitter user wrote, along with side-by-side photos of Kim before his 20-day hiatus and after.