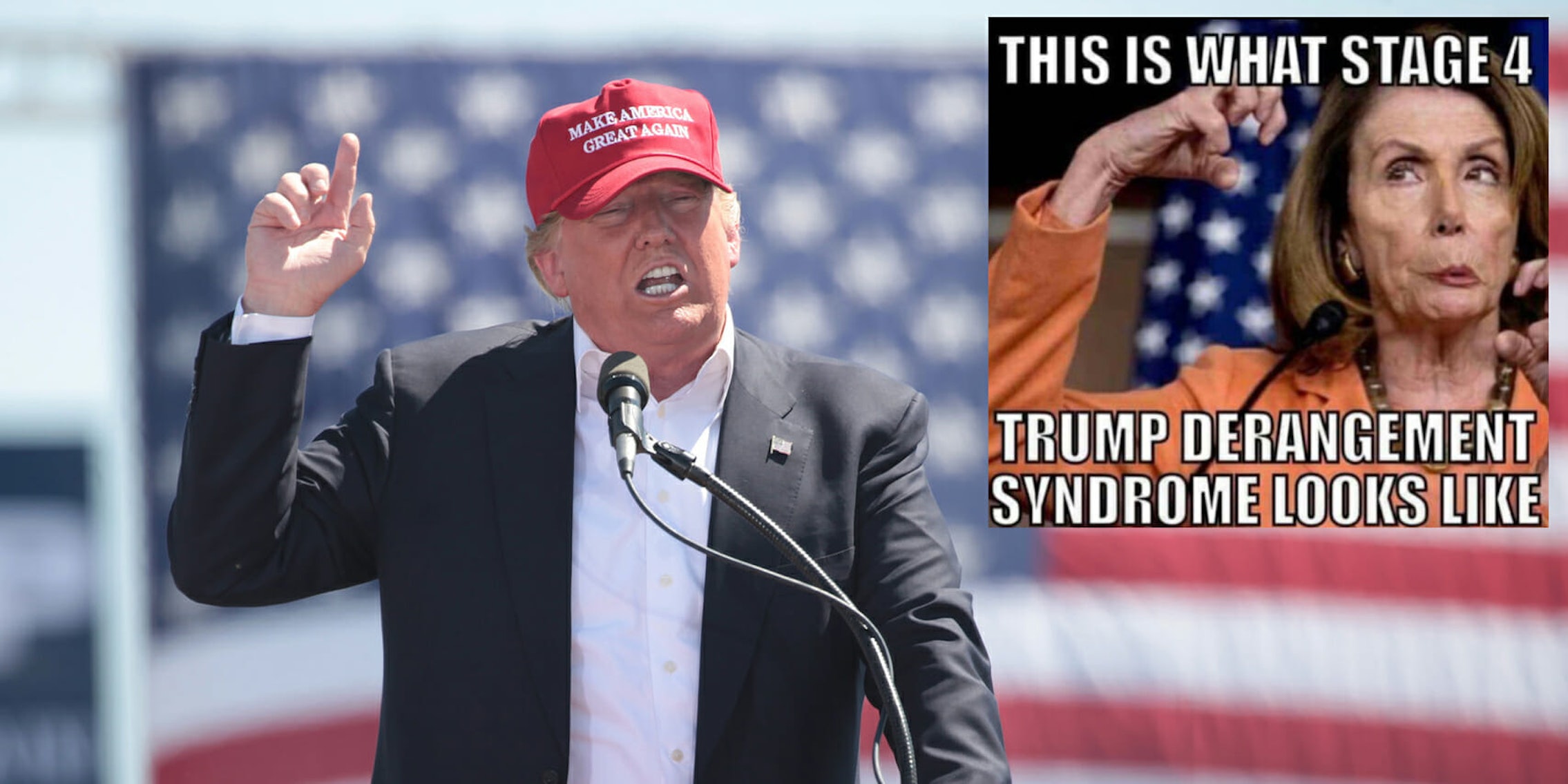 It's the favorite diagnosis of liberals among Trump's supporters.

It’s quite obvious that left-leaning people in the United States are hyper-critical of President Donald Trump–and there’s a term used by his supporters to describe it: Trump Derangement Syndrome.

It’s not an affliction you’ll find in any medical textbook. A quick scan of the right-wing corners of the internet shows that the term is used to describe liberal outbursts throughout Trump’s presidency.

It’s made it’s way all the way up to Trump himself, who tweeted about people upset with his summit with Russian President Vladimir Putin.

The term has come around again in the wake of calls for “civility” among politicians and voters after several Trump administration officials including White House Press Secretary Sarah Huckabee Sanders, Homeland Security Secretary Kirstjen Nielson, and former EPA Director Scott Pruitt, have been confronted in public places in recent weeks.

The president even gave the term some legitimacy earlier this week when he retweeted Larry Elder, a conservative radio host, who used the #TrumpDerangementSyndrome hashtag when retweeting a story about a reporter who resigned after claiming the Capital Gazette shooter wore a “Make America Great Again” hat.

“BEWARE! #TrumpDerangementSyndrome can be career ending,” Elder wrote, drawing a retweet from Trump.

Essentially, Trump Derangement Syndrome is a term used by Trump’s supporters to give a name to the (in their opinion) hysterical opposition to the president. In particular, this comes from the left.

Liberals criticize Trump for every policy, speech, tweet, or statement. Trump’s supporters argue that the opposition is in an unhinged frenzy with a vehement distaste for the president.

Justin Raimondo, a conservative writer, wrote an op-ed about TDS for the Los Angeles Times. He surmised that Trump Derangement Syndrome symptoms come in three stages:

As Raimondo described it, people who “suffer” from Trump Derangement Syndrome overreact to Trump’s tweets and statements. They soon begin using heightened language and hyperbole to describe the president. Ultimately, they debase and can’t “distinguish fantasy from reality.”

“Opinion is unmoored from fact. Life resembles a dark fairy tale in which the villain—Trump—is an amalgam of all the worst tyrants in history, past and present, while the heroes–Trump’s critics–are akin to the resistance fighters of World War II,” Raimondo wrote.

Who talks about Trump Derangement Syndrome?

The idea has become popular on many pro-Trump corners of the internet. r/The_Donald, the unabashedly Trump supportive community on Reddit, routinely uses the term to discuss liberal reactions to the president.

One post, from late April, used a tweet from the @Education4Libs twitter who said it “speaks major volumes” that Democrats were less willing to negotiate with Trump than North Korean leader Kim Jong-un.

The conclusion, according to the r/The_Donald user? “Trump derangement syndrome is very real!”

The subreddit is littered with instances of users posting anti-Trump comments from liberals. Commenters claim they are another instance of the syndrome.

Of course, not everyone online uses Trump Derangement Syndrome in the same way. Some progressive Twitter users have switched the script and are using the term to describe Trump and his followers.

Does the idea that liberals are disgusted with Trump even matter? Is it that strange for an opposing party to have visceral distaste for a president who doesn’t represent their values?

According to some writers—it could.

In an op-ed for Real Clear Politics, Michael Barone argues that the constant barrage of negativity lobbed against Trump by the left could help his poll numbers rather than drop them.

“Looking ahead, it’s possible that Republicans in 2018 and Donald Trump in 2020 could win based on solid achievements,” Barone writes. “But their chances will be aided if Democrats can’t shake off their bad case of Trump derangement syndrome.”

Similarly, an op-ed on Fox News argued that liberal opposition to the president only increases the support of Trump’s most ardent base.

“How do liberals think that 20 percent of reluctant Trump voters respond to these displays of unbridled contempt? They are outraged not at Trump but at his critics. The unhinged hatred for the president makes these voters almost reflexively defend him,” Marc Thiessen writes.

All of these hypothetical scenarios may have some truth to them. However, others argue that Trump Derangement Syndrome is nothing more than a conservative attempt to dismiss real concerns of the American population.

As a 2017 Salon article points out, much of the same hysteria Trump supporters say is nothing compared to the conspiracy theories and rhetoric used by conservatives to describe former President Barack Obama.

During Obama’s time in office, he infamously was subjected to false claims that he was not born in the United States, known as “Birtherism.” Trump was one of the leading voices propagating the conspiracy theory.

Regardless of the ultimate consequences–or lack thereof—of the fake syndrome, it won’t stop a large contingent of voters who disagree with the president and his policies from voicing their displeasure.