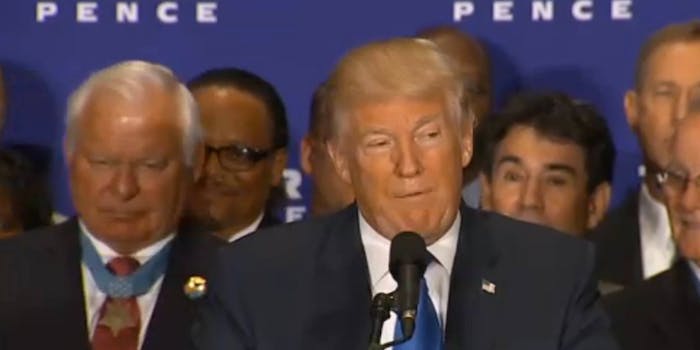 It was during his first public appearance at the new Trump International Hotel in D.C.

Donald Trump announced for the first time in public on Friday that he believes President Barack Obama was born in the United States.

Trump then went on to accuse rival Hillary Clinton of spawning the birther movement.

“President Barack Obama was born in the United States, period. Now we want to get back to making America strong and great again,” said Trump at an event he gave honoring two Medal of Honor recipients at the Trump International Hotel in Washington, D.C., on Friday.

Both presidential candidates spoke at events in Washington, D.C., on Friday morning. Clinton accused Trump of giving rise to the birtherism movement in remarks she gave at the Black Women’s Agenda Symposium in D.C. only a couple of hours earlier.

“When someone shows you who they are, believe him the first time. And we know who Donald Trump is. For five years he has led the birther movement to delegitimize our first black president. His campaign was founded on this outrageous lie. There is no erasing it in history,” said Clinton at the symposium.

Trump refused to admit to the Washington Post on Thursday night that Obama was born in the United States. Trump told the Post that he would answer the question on Obama’s true citizenship “at the right time.” Trump’s campaign then asserted in a statement a few that the candidate believes that the president was born in the United States. The statement also credited Trump for causing President Obama to release his birth certificate in 2011 and therefore putting the birtherism issue to bed.

Trump sparked a public uproar after he sent private investigators to Hawaii in 2011 to investigate Obama’s citizenship status. Obama in response released his birth certificate.

Trump then went on to deny the credibility of Obama’s released birth certificate in the years to follow.

Let's take a closer look at that birth certificate. @BarackObama was described in 2003 as being "born in Kenya." http://t.co/vfqJesJL

Attention all hackers: You are hacking everything else so please hack Obama's college records (destroyed?) and check "place of birth"

Trump has made it clear he wasn’t convinced when asked by Wolf Blitzer on CNN in January 2016 about the president’s citizenship status.

“Who knows? Who knows? Who cares right now? We’re talking about something else, OK? I’m going to have my own theory on Obama. Someday I’ll write a book, I’ll do another book that will do successfully,” said Trump.

Trump adviser Roger Stone further added to the confusion by stating Trump was “always suspicious” about Obama’s citizenship in a radio interview on Boston Herald Radio, also on Friday morning. Stone called the media’s focus of Trump’s refusal to answer the citizenship question a “distraction.”

“I think the bottom line is (…Trump) doesn’t know. He’s not sure. That’s not the same as ‘I’m certain the president was born either in Hawaii’ or ‘I’m certain that he was not,'” said Stone.

More than half of Republicans still doubt Obama’s citizenship, according to a HuffPost/YouGov poll released in January 2016.

Interest in Obama’s citizenship status has gone up and down over time, but has re-emerged as an election issue due to Trump raising questions about Obama’s status on the campaign trail and in media interviews.

Google Trends indicates that searches for “Was Obama born in the United States?” has once again risen in September.