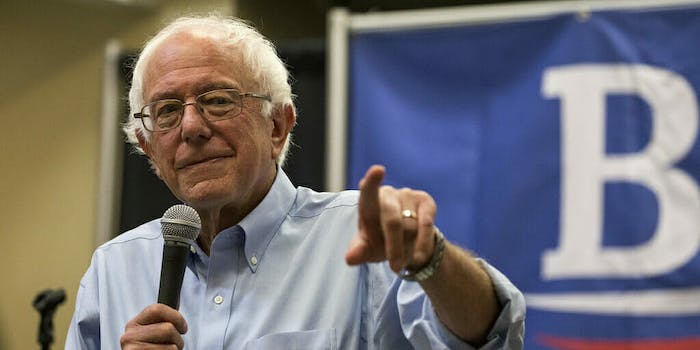 Sanders could face more opposition this time around.

Assessing Sen. Bernie Sanders’ (I-VT) 2020 chances is complicated. While polls have dubbed him the “most popular politician in America,” he faces substantial challenges from within his own party (many of whom will be quick to tell you that Bernie is technically not a Democrat). Will the enduring enthusiasm of his message or the lingering bitterness over the 2016 election decide his fate? Could a Bernie Sanders 2020 campaign lead to a win? Only time will tell.

The tension between Sanders’ progressive mission and ill will left over from 2016 might be enough to persuade him not to run at all. The Vermont senator has been incredibly active since Trump took the White House, making appearances and authoring bills, but he has not definitively said whether or not he will run for president. Then in May, Sanders announced he is running for re-election to the U.S. Senate in 2018.

Were Sanders to win a presidential election, he would turn 80 before his term ended. However, when recently asked about the senator’s age, fitness, and ability, Sanders’ former campaign manager told Salon that Sanders “has more energy…than half the people his age,” and that he’s certain he could serve a full term.

While Sanders lost the 2016 primary against Hillary Clinton, many of his ideas have won. Policy positions that were viewed as fringe ideas before Sanders’ candidacy are quickly becoming Democratic party orthodoxy.

The movement for Medicare for All is gaining steam all over the country. A $15 minimum wage is moving toward inevitability. Plus, it seems like every week a new moderate Democrat is forced to get on board with free college.

All of Sanders’ potential competitors have been sure to align themselves with his ideas, as the progressive wing of the party remains enthusiastic and energized. Kamala Harris now supports single payer healthcare. Kirsten Gillibrand supports a $15 minimum wage. Cory Booker is on board with a jobs guarantee. These positions had nowhere near the popularity they have today before Sanders’ candidacy.

Sanders has spent the time since the 2016 election building a political movement. His organization, Our Revolution, has been endorsing progressive candidates across the country and has already scored a number of primary and general election victories.

The Democratic Socialists of America, who endorsed Sanders early on and prioritize issues like universal healthcare and building the labor movement have seen an explosion in membership. Other groups, like Justice Democrats and Brand New Congress, have emerged as well, also relying on Bernie supporters to fill their ranks.

But being anti-Trump and anti-Republican is not enough. We need to continue our fight for a progressive agenda which will take on oligarchy, and improve the lives of working people throughout our country.

Sanders has been present at important events that have reinforced his political message. He supported a failed attempt to unionize Nissan workers in Mississippi. He has visited Puerto Rico and been an advocate for the citizens there in the aftermath of natural disaster. Sanders was also a vocal opponent of the Dakota Access Pipeline.

Sanders has no chance of getting past a Republican controlled congress. Still, he has introduced legislation to set the table for what a resurgent left could accomplish. He has authored bills aimed at protecting workers who organize unions, punishing corrupt opioid executives, creating universal healthcare, and building a free college tuition plan.

It appears that Sanders is doing everything right. But, for many establishment Democrats, nothing he could do will make up for the primary.

Supporters of Sanders and Clinton were heated throughout the election season, and the animosity continues on Twitter to this day. Considering the slim margin by which Clinton lost, and that she won the electoral college, many Clinton supporters blame Sanders for Donald Trump’s victory (even though more 2008 Hillary voters voted against Obama than Sanders voters switched to Trump).

In Hillary Clinton’s 2017 book What Happened? she offered criticism of Sanders. Clinton wrote that his campaign “caused lasting damage, making it harder to unify progressives in the general election and paving the way for Donald Trump’s ‘Crooked Hillary’ campaign. I don’t know if that bothered Bernie or not.”

Sanders was not invited to the 2017 Center for American Progress Ideas Conference. CAP is an incredibly influential Democratic think tank, and its president, Neera Tanden, who worked on Hillary’s campaign, is notoriously antagonistic towards Sanders.

Bernie Sanders 2020: The early contenders and the opposition

This resentment is not limited to former Hillary staffers. Plenty of Democrats believe that Sanders should be passed over in 2020. Anna March at Slate charged that Sanders wants to turn Democrats into the party of “the great white male.” The Root’s Michael Arceneaux wrote, “considering where we are now, would it not be better to promote his policies through others rather than have him at the top of the ticket?”

This residual bitterness has even led some who supported Sanders to the conclusion that a new candidate is needed to unite the party and toss Trump out of the White House.

Progressive New Republic writer Sarah Jones argued that he shouldn’t run precisely because “Sanders the individual now gobbles up so much airtime and column inches that he threatens to eclipse the American left, to its long-term detriment.”

Bernie Sanders 2020: If Sanders doesn’t run, who will?

The rigors of the 2016 campaign trail were seemingly not lost on the 76-year-old Sanders. However, there hasn’t been another progressive candidate to take up the banner.

Sen. Elizabeth Warren (D-MA) seems reticent and Rep. Keith Ellison (D-MN) was unable to win the DNC chair race. While a progressive bench is emerging, many in office are relatively young and inexperienced. Some of the most popular emerging progressive figures like Indiana’s Randy “Ironstache” Bryce and Cynthia Nixon haven’t been elected to office yet.

If Sanders doesn’t run, he may have to settle between entering the race himself and attempting to push senators Kirsten Gillibrand (D-CA) and Kamala Harris (D-CA) — the left flank of a fairly moderate field — toward a more progressive stance.

Whether or not Sanders will run is unknown. But if he does, he will face an uphill battle just to get to the general election.