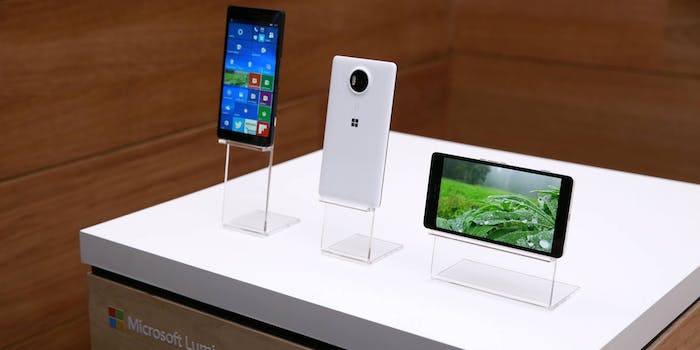 This month Microsoft unveiled the new Lumia 950 and 950 XL flagship smartphones. They were critically acclaimed. Unfortunately, the announcement kept mum on which carriers would actually be offering these phones service.

CNET reported that T-Mobile, Sprint, and Verizon all passed on carrying the device—leaving only AT&T interested. For its part AT&T has confirmed that it will be carrying the 950, with no word on the 950 XL. CNET also mentioned that Microsoft has claimed that the device is not exclusive to AT&T, just that other carriers weren’t willing to bite.

And yet T-Mobile’s boisterous CEO, John Legere, was not thrilled to hear that CNET’s source claimed the magenta network snubbed Microsoft. His side of the story tells something completely different.

This is total bullshit… @Microsoft made the old school Amazon Fire phone like exclusive decision.. Not us https://t.co/oHBCGljRIC

Legere claimed that Microsoft was the sole actor in this decision, opting to go with an exclusivity deal, similar to Amazon’s Fire Phone. (The Fire Phone was a comprehensive failure.)If Legere is to be believed, then Microsoft is at fault here. The company should be more open with what exactly its plans are for rolling out its new flagships. Legere is clearly annoyed.

@_Auzy @CNET why should a news source tell you what @Microsoft should make clear to its customers?

If Legere is correct, then Microsoft has again chosen to use a mobile strategy that was popular in 2009. The Windows Phone line hasn’t been particularly successful, and making the device hostage to a single carrier isn’t likely to help.

@block_kevin we were told it would be old school exclusive, like the #Firephone

T-Mobile’s official Twitter is replying to Lumia fans letting them know that the unlocked Lumia 950 and 950 XL will be compatible with T-Mobile’s network and that the company will be testing it on its network.

@shayaansiddiqui The device is compatible with the T-Mobile network. With regard to band 12/700MHz LTE, it's listed in the official… 1/3

@shayaansiddiqui …specs on Microsoft's Website, but since it hasn't been through our testing labs we can't confirm one way or… 2/3

The Daily Dot asked T-Mobile if features like Wi-Fi calling, international talk and text, and mobile tethering would work on unlocked 950 and 950 XL handsets. The company replied, saying that official specifications suggest yes, but tests would still need to be made.Both the Lumia and Microsoft Twitter accounts have been totally silent on this. Legere ended the Twitter rant by calling out Microsoft, telling the company that the ball is in its court.

To be clear: We did not turn down the new Windows devices. MSFT gave to AT&T. If @microsoft wakes up, we'll talk about @TMobile carrying