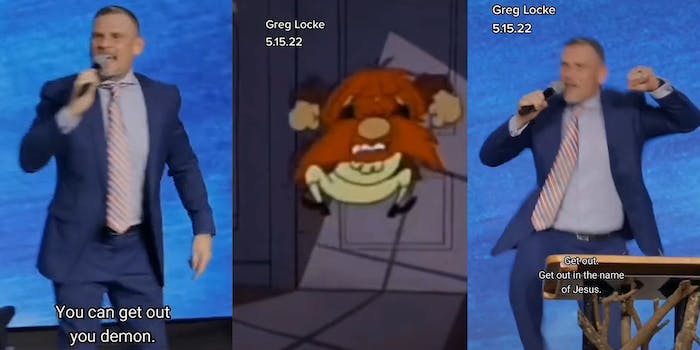 ‘Yessss get them where it will really hurt’: Pastor’s wild rant inspires TikTok challenge of reporting churches to the IRS

Pastors aren't allowed to campaign from the pulpit.

The latest TikTok challenge is going after the tax-exempt status of churches whose pastors talk politics from the pulpit.

In order to be exempt from taxes, the Internal Revenue Service prohibits nonprofits like churches from a variety of activities, including being involved in political campaigns and excessive lobbying.

Critics have long complained that the law is essentially toothless because it’s almost never enforced against religious institutions.

But TikTokers are looking to change that. Reporting churches for violating the prohibition on political speech seems to be the platform’s newest effort.

The challenge is partly inspired by a wild tangent by a pastor in Tennessee.

“If you vote Democrat, I don’t even want you around this church,” Greg Locke of Global Vision Baptist Church ranted at a recent service.

Locke, whose recent antics include threatening to expose “witches” in his congregation, had some choice words for Republicans as well.

A complaint filed with the IRS states that he called Democrats and Republicans “two heads of the same snake” and that “My loyalty is not to a party, my loyalty is the Kingdom of God. Them bunch of crooked, pedophile, sex-trafficking Republicans out to be exposed and done away with as well.”

The videos inspired the most bureaucratic TikTok challenge yet: Filing complaints with the IRS.

“If he’s allowed to speak politics in the church then he should be allowed to pay taxes,” one commented on TikToker del’s (@adhdeconstruction) post with Locke’s comments, which has 800,000 views as of this writing.

Soon other TikTokers started posting duets with del’s clip. Many instruct people to file IRS form 13909 to complain about Locke violating the ban on campaigning from the pulpit.

Dozens of TikToks now include both #GregLocke and #IRS. Some have tens of thousands of views.

“Me: headed to staples for printer ink and reams of printer paper. This is my job now,” a TikToker commented on one of the most viewed TikToks about reporting Locke’s church to the IRS.

Another said, “I printed out four to send on to churches who have hosted him.”

During Sunday service, Locke claimed that he’d dissolved the church’s nonprofit status because “the government ain’t gonna tell me what I can and what I can’t say.”

The Daily Dot was unable to confirm that this is true. Neither Locke nor his church appear on Charity Navigator or GuideStar, which track nonprofits. Churches aren’t required to apply for recognition of tax-exempt status with the IRS.

One group is offering a hat as a reward to anyone who can provide the name of Locke’s nonprofit, if it exists or existed.

The challenge has left TikTok as well. Now people on other platforms are sharing it and suggesting filing complaints against other churches.

“Yessss get them where it will really hurt,” tweeted @MxViceEducation.

In less than 12 hours, a post about the “new challenge” on the White People Twitter subreddit racked up more than 40,000 upvotes and nearly 800 comments.

One redditor in the comments complained that their church raises millions annually and its head pastor lives in a mansion while frequently engaging in political speech during service.