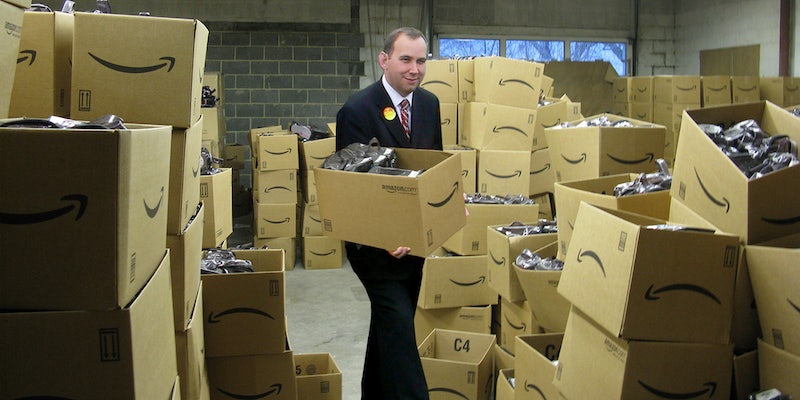 After one shift, politician admits he’s too inept to work in Amazon warehouse

There were no camera crews to witness British Labour politician Thomas Docherty MP grafting in the Amazon warehouse last month. Had there been, they may have captured what his Dunfermline constituents have dubbed the “invisible man” turning up 15 minutes later than regular workers, then performing manual labour in the retailer’s largest U.K. warehouse, which happens to be in his constituency.

After opening in 2011 with a £10 million subsidy from the Scottish government and vocal support from Docherty, the Amazon fulfillment center has been condemned by activist groups such as Amazon Anonymous and the GMB union for what they regard as worker exploitation and reportedly not paying the Living Wage. This month, a former stock checker told the Dunfermline Press that he was sacked and accused of “skiving” by bosses after suffering an epileptic fit and a stroke at work.

In a heated phone conversation this week, the shadow minister explained how difficult he found the job of packing boxes for Amazon, claiming multiple times that he didn’t have the “aptitude” for the job. The former accountant also repeatedly claimed that Amazon pays all staff the Living Wage, despite the company clearly stating that temporary workers and those who have been there under two years earn less.

Hello, Thomas. So did you do the shift?

How much did you get paid?

I didn’t get paid.

I didn’t do a full shift, in the sense that I had my induction, then I had a meeting with the management during the course of the day. I also have a salary as an MP, remember.

How much would you have been paid if you had been working?

Would you be able to feed your family on that amount of money?

I thought it was your job to comment on Amazon’s pay structure because you represent constituents who work in that warehouse.

Sure, but they pay the living wage.

Really? All employees or just permanent staff? They use a lot of agencies where they’re on temporary contracts as well.

They pay the minimum wage obviously. They set out their pay structure when we were in last time, and they have a sliding scale of staff structures. But certainly for those who have done their probationary period, they will be paid the living wage. That’s a great question, are they paying the living wage to the new starts? If they’re not, they’re very close to it. I can’t remember the exact figure for a new start.

Do  you think you were given the Queen’s tour of Amazon? Everywhere the Queen goes, everything’s always painted and clean.

Why’s that not the case?

Can you tell me what you think without reading it?

No. Because I think it’s really hard work. It’s clearly not for everybody. It’s pretty exhausting for someone who’s not used to it. I’m not sure that I’ve got the right aptitude to do that as a career. I’ll give you a simple example. The afternoon was spent doing packing of, you know, items. Depending on the kind of conveyor route that you’re doing, the number of items varies. So if you’re doing just CDs or DVDs, then you’ve got one target—obviously a lot higher than if you’re doing a more complex set of packing. If it’s just all standardized DVDs, single items, then you might put 200 of those through in an hour. Whereas the packing line I was on was kind of larger boxes, large books, various shapes and sizes. Then the target was a lot lower, it was about 80 an hour.

Did you meet your targets?

No, of course I didn’t. For two reasons. One, it’s my first day and nobody on day one is going to meet that target. Secondly, I think I would find it tough to meet to meet those targets. I’m not sure I’ve got the aptitude, the skills, to do that.

How hard can it be to pack boxes?

Well, you have to get into the exact rhythm.

Do you think it’s right for a Labour MP, with its history of ties to the union movement, to support a company that’s so anti-union, and creating non-unionized jobs?

Yes. It’s created 900 jobs that wouldn’t otherwise be in my constituency that are paid the minimum wage. But equally I’ve said to Amazon on more than one occasion, and again I had this conversation with them just last Friday, that I would encourage them to sit down with trade unions and see if they can reach a suitable way forward. But the reality is it’s a matter for the workforce whether they choose to join a trade union.

I’ve spoken to the GMB union and they say it’s incredibly hard for people to join a union, they have to act in secret, like the French Resistance. They’re not allowed any union activity in the warehouses because they don’t have the quota of employees in the union to be officially recognized. So it’s a kind of catch-22.

That’s right. I’ve made it clear, as have other Labour MPs, that we’d like to see them enter into dialogue with trade unions, and it’s not for me to say which trade union that is, by the way. GMB have made noises but there are a number of trade unions. That’s the point—it’s not about a trade union—it’s about trade unions in general. Do I wish Amazon would invite trade unions in for discussion? Yes. Do I think, however, that I should oppose 900 permanent jobs in my constituency that pay the living wage? No.

Are you working with any of the unions on this?

The unions have been in contact with Labour MPs on this, and I’ve got a meeting with the unions when Parliament comes back in October.

So you haven’t actually met the unions yet?

We’ve had a number of pieces of correspondence with the trade unions.

I assume you spoke to the workers as well as the management. What kinds of things were they saying about working there?

A lot of them really liked it. A lot of them said it was better than their previous jobs. Amazon does a four-day week, so they do approximately a 10-hour day. It’s one of those things that suits a lot of people, and it wouldn’t suit other people.