"The 'Net interprets censorship as damage and routes around it."

In the battle of The Interview, the forces of probably North Korea are definitely winning.

After having a trove of its internal emails leaked to the public following a massive hack and receiving threats of terrorist attacks reminiscent of 9/11 at any theaters screening the movie, Sony has agreed to scrap the release of Seth Rogen and James Franco‘s action comedy bromance about a plot to assassinate North Korean leader Kim Jong-un. Sony isn’t making the movie available in theaters or even as a video on demand where viewers could watch in the relative safety of their own homes.

Sony, which clearly wants to stop further leaks from revealing embarrassing material like CEO Michael Lynton making dismissive comments about sexual assault victims on college campuses, has even gone as far as hiding physical advertisements for the movie.

Yesterday, this was a billboard for ‘The Interview’ pic.twitter.com/t0JNRZskqE

CNN reports a message the hackers sent to Sony’s top executives on Thursday evening demanded that the multi-national entertainment company go even further than just halting the release of the full film.

“Now we want you never [sic] let the movie released, distributed or leaked in any form of, for instance, DVD or piracy,” the message read. “And we want everything related to the movie, including its trailers, as well as its full version down from any website hosting them immediately.” [Emphasis added.]

One the surface, it may seem ridiculous that the hackers, a group going by the handle Guardians Of Peace, are ordering Sony to stop the movie from being pirated. By definition, online piracy is something that happens outside of the permitted distribution channels of the rights holder. However, there are actions that Sony can take to keep the The Interview off of the BitTorrent networks where the vast majority of online piracy takes place.

Under the Digital Millennium Copyright Act, sites that host pirated material uploaded by users aren’t held liable if their operators remove that content once it’s brought to their attention by the rights holders. If someone uploads a leaked copy of The Interview to YouTube, Sony could inform Google and then Google would be legally required to take it down.

While neither Sony nor Google responded to the Daily Dot’s request for comment regarding the issue, it appears as though Sony is actively enforcing its intellectual property rights on content from The Interview that’s being uploaded on the streaming video platform.

When it comes to content being illegally shared on peer-to-peer services like BitTorrent, that enforcement system doesn’t work because there’s no single company hosting the material on a dedicated server. Instead, the distribution occurs directly between one user and the next. But that doesn’t mean Sony is out of options.

There are handful of companies, of which RightsCorp is the most prominent, studios and record labels can hire to monitor these networks for them. When RightsCorp identifies someone sharing a copyrighted work, it sends that person a message demanding they pay a $20 to avoid having charges being pressed against them. RightCorp has relationships with over 140 different Internet service providers, meaning that, after multiple violations, a person could have their Internet service terminated.

In May, RightsCorp announced it had dealt with 75,000 individual cases of copyright infringement in this manner.

The idea behind this strategy is to generally dissuade people from engaging in online privacy. If Sony wanted to, it could use RightsCorps’s peer-to-peer monitoring systems to find every individual sharing The Interview and aggressively litigate them into oblivion.

The problem with this strategy is, to quote tech pioneer John Gilmore “[The Internet] interprets censorship as damage and routes around it.”

Before it became the subject of an international diplomatic crisis, The Interview was just another comedy with middling critical reviews. After the hack, and the film’s subsequent cancellation, interest in flick exploded.

Here’s what the Google search volume for the term “The Interview” looks like. 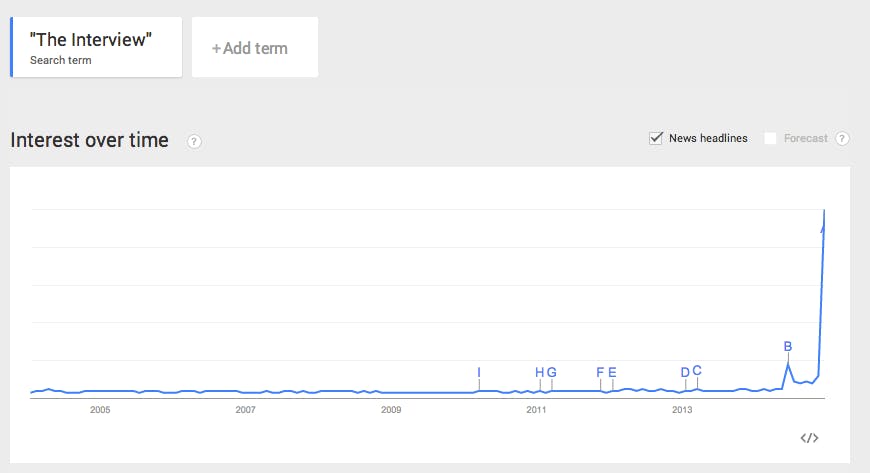 Notice that giant spike at the end? That’s what happened after Sony agreed to pull the film.

Since Sony is essentially bowing to the attackers’ every demand, this situation sets up a fight between the studio and the Internet itself. Sadly for Sony, a group of Dutch computer scientists just released a killer app that may very well make it impossible for the company to put that genie back in the bottle once its released online.

A group of researchers at Delft University of Technology in the Netherlands recently unveiled a program called Tribler, a peer-to-peer BitTorrent-based system for sharing files that both renders its users completely anonymous and is impossible to shut down.

Tribler works by encrypting all information that passes through it end-to-end and then having it bounce around nodes on the network at random—making it impossible for an outside observer to determine the identity of anyone using it. The system eats up considerably more bandwidth then a standard BitTorrent client, but it likely renders moot the ability of companies like RightsCorp to finger pirates.

The designed is modeled off of the Tor network, but doesn’t actually run on Tor. Instead, Tribler’s system is entirely separate from Tor and designed to be optimized for downloading torrents.

In addition, Tribler is entirely decentralized, with no single server or group of servers necessary to make it work. This setup makes it resilient against attempts to shut it down. Even if law enforcement officials raided the offices of Tribler’s creators and shut down all of their web operations, the network would still be functional as long as there are people anonymously running the software.

Creating a peer-to-peer system that can’t be shut down is especially timely because the Bittorrent site The Pirate Bay was shuttered earlier this month after Swedish authorities raided the Stockholm data center where the site was hosted.

“The public was beginning to lose the battle for Internet freedom, but today we are proud to be able to present an attack-resilient and censorship-resilient infrastructure for publishing,” Dr. Johan Pouwelse told Torrent Freak.

If a copy of The Interview was uploaded to the Tribler network it would essentially be game over on any attempt to keep the film unseen. Sony is doubtlessly doing whatever it can to keep the full movie from seeing the light of day.

It should be noted that torrenting networks can be used for purposes other than sharing pirated content. Video game developer Blizzard uses torrents to distribute updates for its games. Tech companies like Facebook and Twitter use it for distributing files internally. BitTorrent Sync lets users sync the files the have legal rights to across multiple devices.

Additionally, officials at the company BitTorrent advised Sony against using pirate sites as a way to leak The Interview to the public. “That would only serve to encourage bad actors,” BitTorrent told the Hollywood Reporter. “It’s also important to make the distinction that these piracy sites are not ‘torrent sites.’ They are piracy sites that are wrongfully exploiting torrent technology.”

However, it would only take one disaffected Sony employee, possibly inspired by President Obama calling the decision not to release the film a “mistake,” to put the film online. Once that happens, the Internet will simply do what it does best—make the thing go viral.

Once that happens, there will nothing anyone can do to stop it.