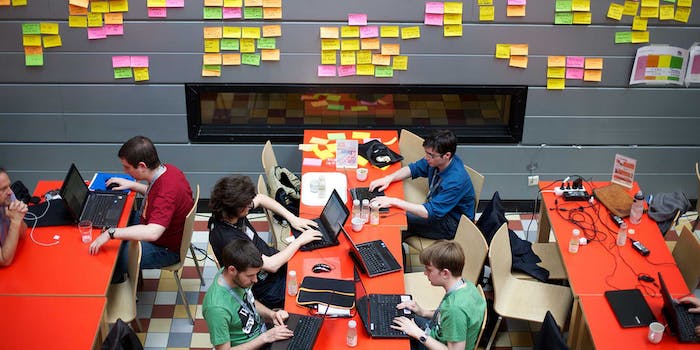 In an age where the unpaid internship persists as a cruel, unwavering reality for millions of young job-seekers, eager-eyed tech interns are taking home between $6,000 and $8,000 a month, plus generous housing stipends, according to BetaBeat.

The largess afforded by Silicon Valley companies stands in complete contrast to the prevailing trend of hiring unpaid, or poorly paid, interns and highlights a new chapter in the continuing debate over income inequality in this country. According to the Economist, nearly half of internships in the United States are completely unpaid. These positions often act as barriers to entry into white collar professions for those who do not have the resources to work for free.

But for Jessica Shu, a 19-year-old student at Cornell, the options for paid work seemed to be overflowing. Shu decided to draw up a comparison of the wages offered by tech companies for last summer’s interns, and posted her results to a Facebook group for student coders, called Hackathon Hackers. 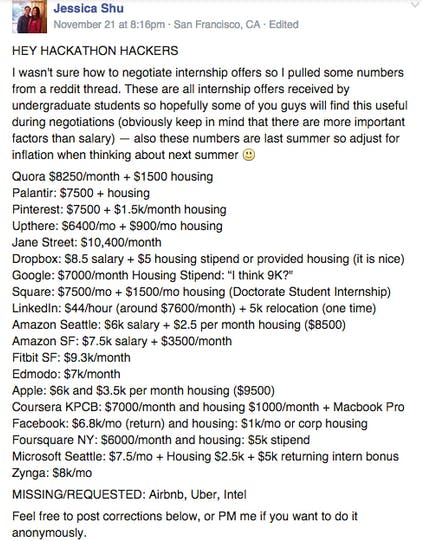 The salaries promised by these tech companies are even more shocking when compared to other paid internships in different fields. According to a survey conducted by Glass Door, San Francisco-Bay Area companies make up a staggering 18 of the top 25 highest paying employers of interns.

Paid media internships, by comparison, offer mostly in the $10-15 per hour range, while Healthcare interns fare slightly better at approximately $20 an hour. Even some financial giants, the bastion of the coveted “Summer Analyst” position, do not pay nearly as well as tech companies. Financial services firm Morgan Stanley Smith Barney, for example, pays its interns about $10.50 per hour.

Many young workers are fighting back against former employers and trying to make the unpaid internship a thing of the past. There have been major successes in recent months, as businesses have been forced into unprecedented settlements. However, for the time being at least, unpaid and low-paying internships remain a constant. In the meantime, students everywhere looking for a solid paycheck might have to buckle down, follow the money, and take some C++ courses.