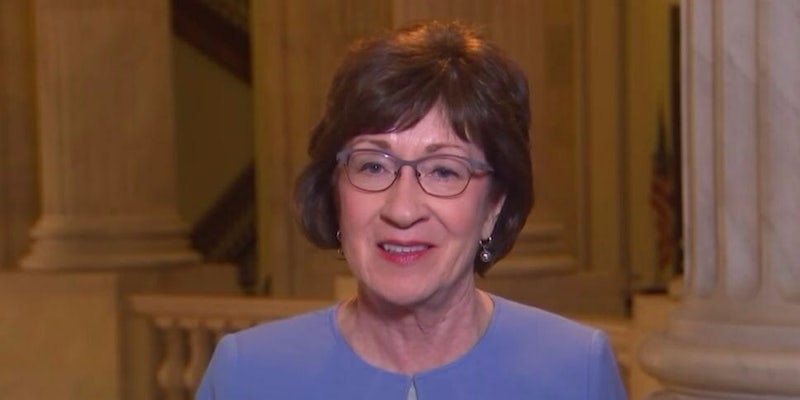 Collins again is a GOP trailblazer.

With the FCC set to try to repeal net neutrality next month, those who worry about corporations remaking the internet into a tiered payment system have been fighting back, even if it’s only on the Twitter account of FCC Chairman Ajit Pai.

But now a prominent GOP senator has come out against the repeal, likely giving the movement to stop Pai’s plan a needed boost of energy.

Sen. Susan Collins (R-Maine), perhaps the most moderate Republican in the Senate, told the Bangor Daily News she does not support the FCC’s attempt to end net neutrality.

“Internet providers must not manage their system in an anti-competitive way that limits consumers’ choices,” Annie Clark, a spokeswoman for Collins, told the newspaper.

Collins, who was one of only three Republicans to vote against the Senate’s bill to repeal Obamacare, also is worried about discouraging the spread of broadband internet in the rural areas of her state.

Collins appears to be the only GOP member in the Senate to oppose the repeal, and conservatives in general say net neutrality should be repealed because it involves too much government regulation in what should be a free market.

Evan Greer, the campaign director for the nonprofit Fight for the Future, was thankful for Collins’ comments.

“We hope to see more Republican lawmakers join her call for the FCC to protect, not gut net neutrality before the agency’s Dec. 14th vote,” Greer said in a statement. “Sen. Collins clearly recognizes that businesses and Internet users across this country simply cannot afford to be unprotected from anti-competitive practices perpetrated by the nation’s broadband giants. An overwhelming majority of Republican voters support existing net neutrality rules. Other GOP lawmakers should follow Sen. Collins lead, listen to their constituents about this crucial issue, and take action to stop the FCC’s irresponsible rush toward a vote.”