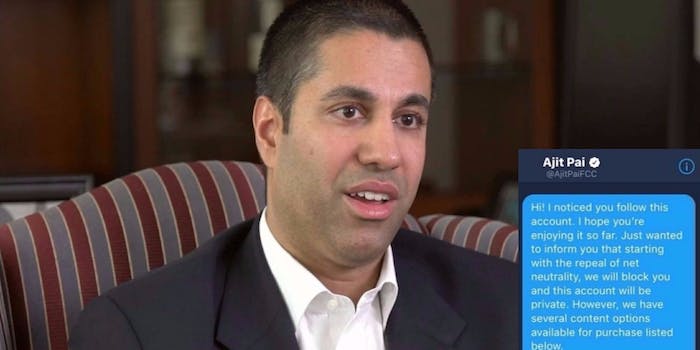 The founder of the We Rate Dogs Twitter account is not afraid to get political, and he’s definitely not shy about poking fun at the Donald Trump administration.

On Thursday, founder Matt Nelson apparently noticed that FCC Chairman Ajit Pai followed another one of his Twitter accounts, @dog_feelings, after Pai retweeted it on Thursday.

That’s when Nelson decided to send the person who badly wants to end net neutrality a friendly message.

Ajit follows dog feelings and seems to enjoy it. Who wants to help me craft a sincere DM to him explaining why he shouldn’t ruin the Internet? pic.twitter.com/NkXvdhKNOX

A few minutes later, the DM to Pai had been sent.

“Just wanted in inform you that starting with the repeal of net neutrality, we will block you and this account will be private,” the message reads, before detailing the premium “Pupper” and “Doggo” packages he can buy to access the account.

As the Daily Dot explained in this piece last week, the loss of net neutrality could make you pay more for internet access. “Critics of the FCC’s plan warn that ISPs could begin to institute ‘tiered’ internet plans, much in the same way that television providers offer different cable TV packages,” wrote the Daily Dot’s Andrew Wyrich. “For example, your ISP might offer one plan that includes access Bing’s search engine but not Google’s, or to Twitter but not Facebook, while only the most expensive plans would give customers access to the internet as they do today. Others worry about censorship and limits on freedom of expression online.”

That’s why Nelson’s DM to Pai is so biting. How upset would Pai be if he had to pay $50 a month for the Doggo Package in the future when, today, Pai has to pay nothing for all his @dog_feelings content?

The trolling effort by Nelson was A-plus. In We Rate Dogs terms, we’d give it 13/10.