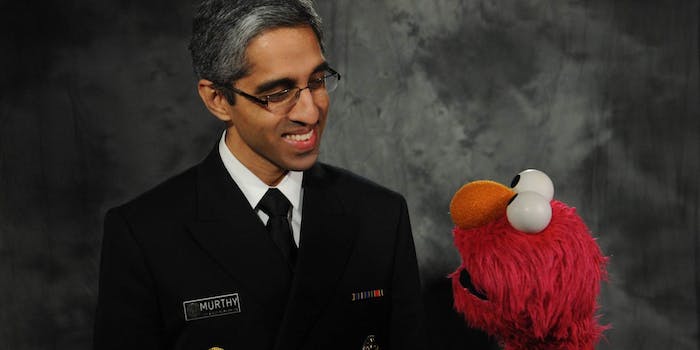 Surgeon General Murthy settles the vaccines debate once and for all

"The evidence is very clear that there's no link between the measles vaccine and autism."

The pair filmed a PSA for parents and children about the safety and importance of vaccinations, and we were thrilled to help make it happen.

Prior to his time in the Obama administration, Dr. Murthy worked as a Brigham and Women’s Hospital physician; created a nonprofit for spreading AIDS awareness in India; and cofounded TrialNetworks, a cloud-based system for expediting and improving the clinical trials of new drugs. (Feel like an underachiever yet?)

Since becoming surgeon general late last year—after a dust-up with the National Rifle Association and opposition from other conservative groups—Dr. Murthy has made it his mission to help better inform Americans about healthcare and healthy living. Following the video shoot, we had a few minutes to chat with the surgeon general about vaccinations, misinformation on the Internet, and his goal to keep Americans out of the doctor’s office in the first place.

There is a lot of contradictory information out there about vaccines, and the so-called anti-vaccination “movement” is a durable one. What are the best ways to counteract the misinformation about vaccines?

So, there’s a lot that we have to do to continue to get the message out to parents and to kids about the importance of vaccinations. For some of this, we can use technology and the Internet. And for others, we have to use the old-fashioned method of talking to people directly. And as surgeon general, my goal is to pursue both methods, to use technology and old-fashioned methods of communicating information about vaccines.

When it comes to communicating directly to people, I think there’s no substitute for going directly to communities and meeting people where they are, hearing their concerns, and addressing them directly. And that’s part of what I’ve been doing these past few months as part of our Surgeon General’s Listening Tour, where I’ve traveled around the country to small  and big towns to listen and hear first-hand what people’s concerns are.

“You can easily find people who can amplify your current way of thinking, whether that’s grounded in facts or whether it’s driven by rumors.”

Many times when I was on the road, vaccines came up, and I had a chance to speak with community members directly about the importance of getting your kid vaccinated. And I had the chance also to dispel some of the myths out there about vaccines, particularly the measles vaccine. There are myths, as you know, circulating that the vaccine causes autism. It absolutely does not. The evidence is very clear that there’s no link between the measles vaccine and autism. But it’s important for trusted medical authorities and for me as surgeon general to be out there sharing that message directly with the community.

But as far as technology is concerned, Andrew, I think that there is more that we need to do here as well. We need to continue to use the Internet to share information with people about vaccines through new and old social media platforms and through our resources, like Vaccines.gov, which is our site where you can find scientifically based information about vaccines and learn more about what your kids need.

Americans use the Internet to investigate all types of health information. What’s your view on the wisdom of searching for health-related issues online?

Well, look, the Internet is an incredible resource for finding information. And let me just say that, thanks to the Internet, we’ve been able to disseminate scientifically grounded information about vaccines to millions of people, both in the United States and around the world. The Internet, I should say also, gives us the opportunity to gather questions from people. One of the things we did when we were in Seattle recently is we had a tele-town hall with moms—in fact, with almost 13,000 moms across the country—where we were able to gather information, questions from them online, and then answer those questions in a telephone town hall. So, technology has been a real asset and a strength for us when it comes to getting the message out.

The challenge with the Internet is that it allows us to amplify accurate information, but it also can allow for false information to be amplified as well. And especially given the evolution of online chat rooms and forums, you can easily find people who can amplify your current way of thinking, whether that’s grounded in facts or whether it’s driven by rumors. So we have to be careful about the sources from which information is gathered on the Internet. Sometimes it’s easy to tell when a source is coming from a scientifically credible author, but it’s not always easy to tell that. And that’s why, particularly with vaccines, given that this is such an important issue and can be a scary issue for parents who may have heard rumors, we encourage all parents to go to Vaccines.gov to find information that’s credible, that’s scientifically grounded, and they can rely on to keep their kids safe.

The challenge with the Internet is that it allows us to amplify accurate information, but it also can allow for false information to be amplified as well.

For parents who don’t exclusively look to Vaccines.gov for their information, how can they be sure the information they find elsewhere is scientifically sound?

Well, certainly, when you see claims made on the Internet, it’s important to first determine if there’s a reference for those claims. There are all kinds of wild claims made out there about vaccines and about a host of other healthcare conditions that many of them may not be backed up by actual references. When you do find a reference, it’s important to look at what kind of reference that is. More reliable references are scientific papers that are published in peer-reviewed journals. What this means is the scientific community has examined and vetted these papers and has approved them for publication. That’s a much more reliable source of information than a blog or an opinion piece that may be written by somebody who may or may not have a solid understanding of the science.

Your official surgeon general Twitter account tweeted out a campaign that aims to make America the “healthiest nation in the world in one generation.” What key steps need to take place to make that happen, and what are the major roadblocks standing in the way?

The American Public Health Association had launched a campaign recently calling for us to make the healthiest nation in a generation. And I certainly share the desire to make the United States a healthier and stronger nation, one that can achieve all the great things we want our country to achieve. But I think in order to do that, in order to become a healthier and a stronger nation, there are a few key things that we need to do.

“First and foremost, I believe it’s important for us to increase our focus on prevention.”

First and foremost, I believe it’s important for us to increase our focus on prevention. We invest the vast majority of our healthcare resources in treating illness, and that is incredibly important. But unless we increase our focus on prevention, we are going to see more and more cases of diabetes, of heart disease, of cancer, and it’s going to be tough for us to keep up with treatment alone.

The second thing that we have to do is, we have to recognize that to do prevention well requires the participation and partnership of institutions throughout the community. That means traditional healthcare players, like hospitals and public health departments, but it also includes nontraditional players, like our faith-based institutions, our civic organizations, our schools, and our employers. All of these institutions, in one way or another, end up shaping, you know, health. They can have an influence on whether healthy choices are easier or tougher to make. And they can also have an impact on culture, on whether healthy choices are desirable or not. So, it’s incumbent on all of us now to recognize that we have a roll to play in making healthy choices easier, and then ultimately contributing to a healthier, stronger country.

This is going to be my main focus as surgeon general: focusing on mobilizing institutions and individuals across the communities to be partners in prevention.