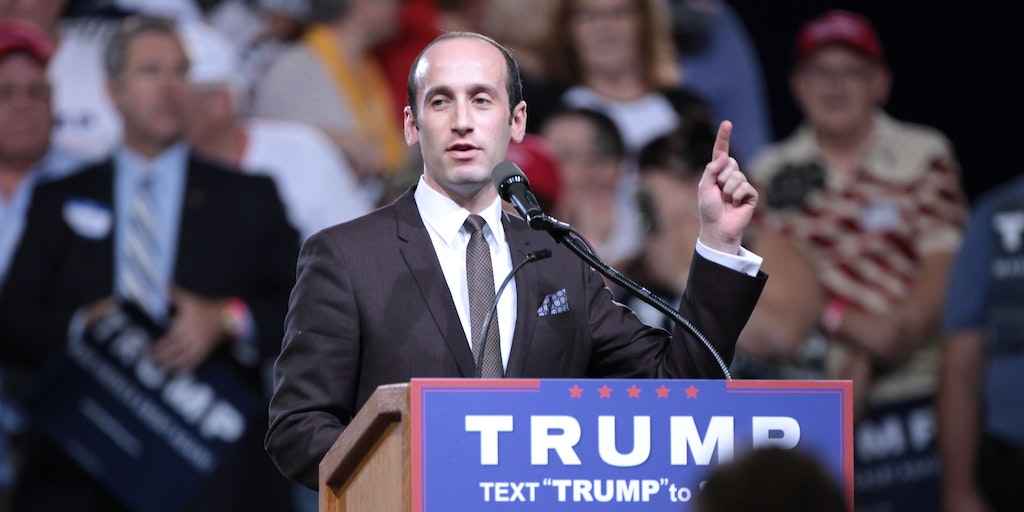 'A not subtle message to the QAnon part of the base.'

The news cycle just gets wilder as the clock ticks down to Election Day on Nov. 3.

Today’s prize for the most bizarre storyline belongs to Stephen Miller’s QAnon dog whistle during a call with reporters.

QAnon is a baseless conspiracy theory that the world is controlled by a Satanic cabal of liberal elites who sacrifice and molest children. It’s been repeatedly legitimized by President Donald Trump, whom followers believe is waging war on this fictitious cabal.

Today Trump’s senior adviser implicitly joined their ranks during a call with reporters.

Miller, whose “racist” emails leaked last year, also falsely stated that the Trump administration has kept families together. In fact, it implemented a family separation policy—of which Miller was a key architect—that earned the United States worldwide recrimination. Just last week news broke that it still hasn’t located the families of 545 of the children who were separated due to the administration’s zero tolerance policy.

Judd was among those noting the parallels between QAnon and Miller’s unsubstantiated claim that if he becomes president, Biden’s administration would somehow encourage child trafficking.

Molly Wood tweeted, “The QAnon is coming from inside the White House.”

Some also pointed out that, contrary to popular belief among the pedophilia-obsessed conspiracy theorists, child trafficking prosecutions have actually decreased under Trump.

Miller’s remarks about child trafficking were made as he made similarly baseless assertion that Biden has proposed unfettered immigration, also known as open borders. Trump and other Republicans have long falsely claimed that Democrats advocate these policies.

Further, when Biden was vice president, the Obama administration was criticized by immigrants’ advocates for deporting 3.2 million people, more than any other president.

None of these facts will matter much to QAnon conspiracy theorists, however. No matter what he says or does, to them, Trump is a demagogue fighting an insidious scourge. Miller’s statements will only further dement this belief.

Trump himself has thus refused to denounce QAnon, in spite of his own FBI labeling it a domestic terrorism threat. Asked about QAnon during a town hall earlier this month, Trump feigned ignorance, but praised its fixation on pedophilia.

“I do know they are very much against pedophilia, they fight it very hard, but I know nothing about it,” he said.