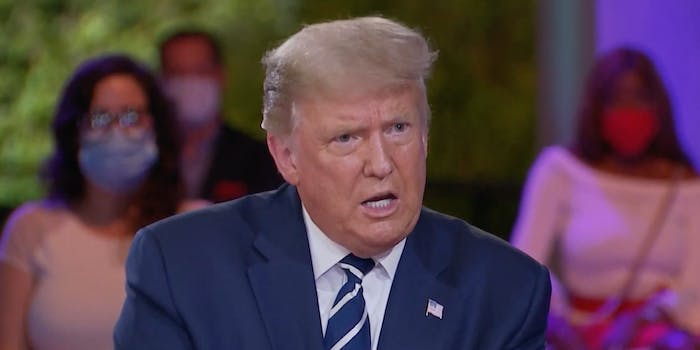 'I do know they are very much against pedophilia, they fight it very hard, but I know nothing about it.'

President Donald Trump claimed to know nothing about the QAnon conspiracy theory and refused to denounce it during Thursday evening’s town hall event on NBC.

Trump also failed to dispute one of the core parts of the conspiracy theory: that Democrats are running a Satanic pedophilia cult.

The town hall moderator, Savannah Guthrie, asked Trump to say “once and for all” that the beliefs of the conspiracy theory was “completely not true.”

When asked whether he would denounce the QAnon conspiracy, the president repeatedly alleged to know nothing about it.

Trump then dodged the question by changing the subject to Antifa. After Guthrie continued to press him, the president once again denied knowing anything about the conspiracy, despite discussing it previously and retweeting QAnon-related tweets on numerous occasions.

“Let me just tell you, what I do hear about it is they are very strongly against pedophilia, and I agree with that. I do agree with that,” the president said.

“But there’s not a satanic pedophile cult?” Guthrie said before Trump jumped back in.

“I have no idea, I know nothing about it,” he replied.

“You don’t know that?” Guthrie asked.

“No I don’t know that, and neither do you know that,” Trump said.

Trump was also questioned about promoting a tweet this week in which a conspiracy theorist alleged that SEAL Team Six had been killed by former Vice President Joe Biden and that the soldiers shot a body double and not al-Qaeda terrorist Osama Bin Laden.

The president responded by stating that his retweet was not an endorsement before arguing that Americans should decide on their own whether the conspiracy was true.

Guthrie, pushed back by telling that he is the president and not “someone’s crazy uncle who can just retweet whatever.”