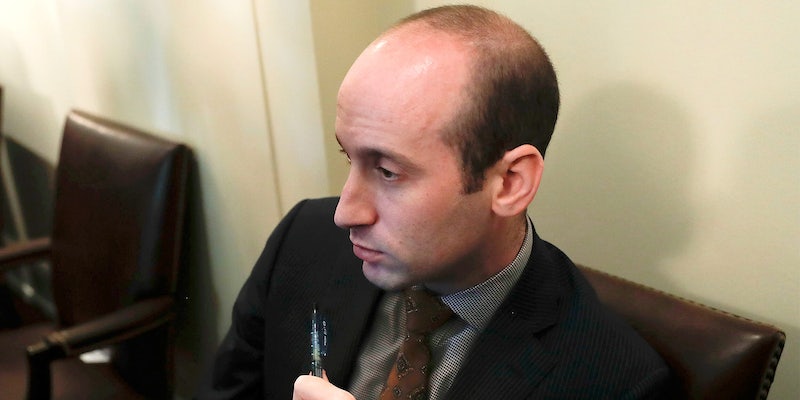 Hatewatch reviewed over 900 emails Miller sent to Breitbart from 2015 up until the summer of 2016 and found it included links to InfoWars, a plug for a white nationalist book, a focus on the crime committed by non-whites, a lament about Confederate symbols being removed from the South, and shared links from a white nationalist site.

The emails from Miller consisted mostly of when he was working with then-Sen. Jeff Sessions (R-Ala.) as an aide. Sessions was one of Trump’s earliest supporters, and Miller joined the Trump campaign in January 2016.

Miller’s exchanges were with Katie McHugh, a former editor at Breitbart, who was fired for anti-Muslim tweets. She has since spoken out against the far-right.

According to Hatewatch, Miller shared links with McHugh from VDare, a white nationalist site, arguing that refugees should not get temporary protected status in the wake of a hurricane in South America.

He also flagged the novel Camp of the Saints in emails, a book that has become popular in white nationalist circles for its portrayal of non-white refugees committing violent crimes against Europeans. After Miller wrote to Breitbart about how they should use the article as a caution against a call for open borders, Breitbart published a piece.

In the wake of Dylann Roof’s massacre at a church in Charleston, South Carolina, where he killed nine African-Americans, Miller bemoaned how symbols of the Confederacy were being taken down, upset that Amazon was pulling Confederate merchandise.

“[W]hat do the [Confederate monument] vandals say to the people fighting and dying overseas in uniform right now who are carrying on a seventh or eighth generation of military service in their families, stretching back to our founding?” Miller wrote to McHugh.

You can read all of Hatewatch’s story here.