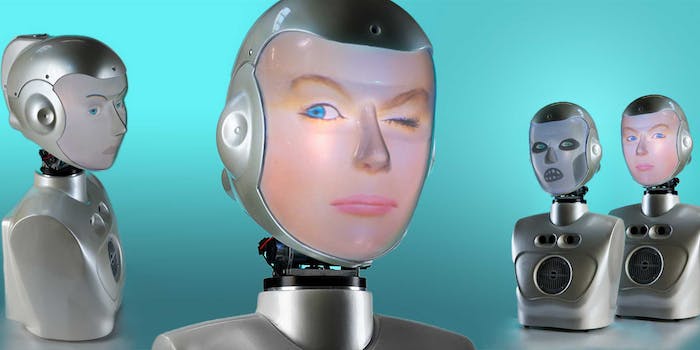 This is either our future or our doom.

At my last job, most of us worked in an office, together, every day. A couple of the other employees were remote, however, and sometimes when we would talk in the online chat room about fun office things they were missing (examples include Call of Duty breaks, donuts, and beer… usually beer), they would propose we get some sort of robot that would motorize itself around the office and allow them to be a part of our world, that would wear their faces so we too could feel as if they were there.

If only we’d known about SociBot.

At the time, SociBot (which makes me think it’s a sociopathic robot… who knows, maybe it is) was likely only a prototype, but now it’s a terrifying device that wears a human face and knows how you feel. “SociBot integrates SHORE, an image processing software suite developed by Fraunhofer IIS,” explains Engineered Arts, the company that makes SociBot. “SHORE is able to find and track faces, accurately estimate gender, and provide a good estimate of a person’s age.”

It can also recognize facial features and expressions. SociBot knows how you feel (and how old you are). You cannot hide from SociBot. SociBot knows all. Also, it can wear a very human-like face!

As mildly terrifying as a face-reading robot sounds/is, the technology here is nothing short of incredible. SociBot responds to its audience based on what it reads off of you, including body language and gender. It can also make eye contact and tell different people apart. It’s also Wi-Fi enabled, so you can download content for your SociBot or troubleshoot directly.

But also, it has a glowing replica of a human face; its eyes will follow you around the room, and “can track the positions of more than 12 people at a time, even in a crowd.”

The company that makes SociBot also has a bot called RoboThespian (an entertainer) and is working on a model called byrun, a biarticulate running robot (also known as our impending doom).

If this has you excited and not terrified (I’m honestly a lot of both, I welcome our SociBot overlords), but it sounds expensive, worry not: There’s a SociBot-Mini model, and Engineered Arts says both are “a great choice if your robo budget is limited, or you don’t have the space for a full-sized humanoid.”