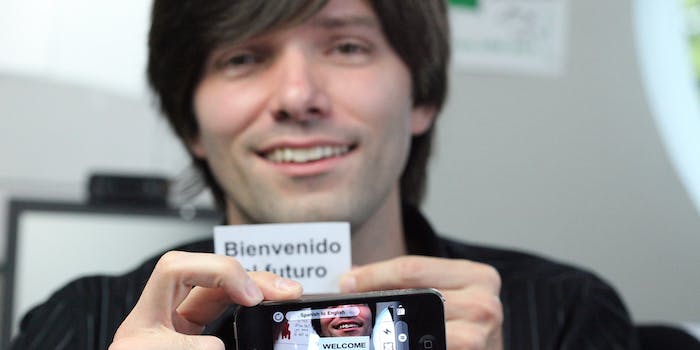 We live in the future.

In the science fiction series A Hitchhiker’s Guide To the Galaxy, Douglas Adams describes an odd, leech-like creature known as the babel fish, capable of acting as an instant translator for all language. Inserting the babel fish in an ear, characters immediately understood what someone was saying in a foreign tongue.

Unless an unprecedented radiation-based catastrophe mutates animals in some really intense ways, there will never be a creature like the babel fish. That doesn’t mean the idea of a universal translator is withering. Quite the opposite: Microsoft is readying a new feature for Skype that can translate languages on voice calls in close to real time.

Skype Translator will be available as a Microsoft 8 beta app before the end of 2014, according to Microsoft’s blog. There’s no word on how long it’ll take to be available to Skype’s 300 million-person userbase.

The translation technology uses neural network-based speech recognition and Microsoft translator to convert one language to another in seconds. And Nadella has a huge reason to be excited.

Microsoft isn’t the only company bent on producing this type of translator (Google is prototyping automated translation technology for calls, and Japanese mobile operator NTT DoCoMo already introduced a voice call translator from Japanese to English, Mandarin, and Korean in 2012). But since Microsoft looks closer to beating Google to release this feature, Skype is going to gain a big advantage over other VoIP services, including Google Hangouts. Nadella mentioned that the service might not be free, but it’s safe to assume it’s probably going to be a lot cheaper than hiring a translator.

Corporate Vice President of Skype Gurdeep Pall noted that Skype Translator is the culmination of a decades of work, and compared the new feature to Star Trek’s Universal Translator. “The Star Trek vision for a Universal Translator isn’t a galaxy away, and its potential is every bit as exciting as those Star Trek examples,” he wrote. “Skype Translator opens up so many possibilities to make meaningful connections in ways you never could before in education, diplomacy, multilingual families and in business.”

Pall is right. If (and it is a big if) the Skype Translator works as smoothly as the demo indicates, and Microsoft rolls it out in a timely fashion (mostly, before Google can get there first), this is going to be an unambigously badass thing for Skype and its users.

When Skype started out, it had the same kind of clear-cut advantage over other VoIP providers by being the most recognizable and the first mainstream option. The service is still super-popular, but it lost some of its cachet when Google introduced Hangouts and gave it a real rival. For people who want to use a voice call but need to talk to someone in another language, Skype is going to be by far the best option—at least until Google can get its own translator ready.