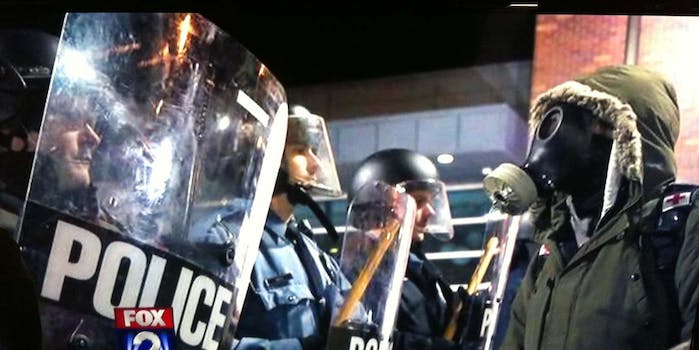 Did police protests spark a post-Ferguson crime wave? Not according to the data

Is the media intentionally relying on flawed statistics?

Rarely citing legitimate, peer-reviewed research, media outlets have spouted steady speculation about the existence of a so-called “Ferguson effect,” or a rise in crime following public displays of contempt for law enforcement practices.

A new policy brief published Tuesday by the Sentencing Project, an organization that pursues reform in sentencing policies, however, discloses a few statistical holes in the theory, which is gaining popularity among conservative groups.

Demonstrations against specific acts of police violence have allegedly led a few police departments to withdraw officers from high-crime areas out of fear that officers will be prosecuted for conducting legal searches and arrests. These are rarely official department policies; rather, as in the case of New York City, they are seemingly acts of protest by the officers themselves.

“If you want to tell a story of crime increases, you can. If not, just pick from a different tree.”

Following a series of peaceful protests against the New York Police Department in reaction to the chokehold-related death of Eric Garner last year, the NYPD began an unofficial “work stoppage.” After two officers were murdered by an out-of-state killer, the city reportedly saw a 94 percent drop in tickets for traffic violations and other minor offenses as a result of the officer-led protest.

To some, it appeared the department was relaying a message to the public: If you don’t like the way we enforce the law, we don’t have to respond to your calls. By June, the murder rate had increased by 20 percent compared to the early months of 2014. Many news reports have speculated over whether the rise in deaths can be attributed to the “Ferguson effect.”

As highlighted by the Sentencing Project, the reliability of statistics measuring crime rates over the recent months is precarious at best.

“The Bureau of Justice Statistics’ National Crime Victimization Survey does not produce city-level crime data. The FBI’s Uniform Crime Reports does provide crime data for individual cities, but the data are not timely enough for monitoring crime changes over the past several months,” the group explains.

“So, everybody’s data is anecdotal, a cherry picker’s delight. If you want to tell a story of crime increases, you can. If not, just pick from a different tree.”

For example, the project examines crimes rates offered for St. Louis, Missouri—of which Ferguson is a suburb—where the homicide count was higher in 2014 than in 2013 for most of the year. 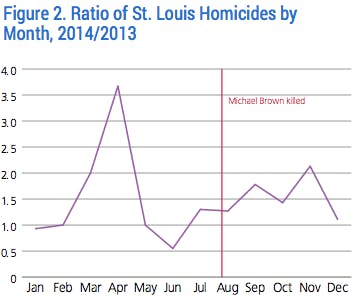 While the statistics show a moderate increase in the homicide rate following the police-shooting death of 18-year-old Ferguson resident Michael Brown and the protests that followed, it does not exceed levels reached earlier in 2014 before those events occurred.

“Whatever their cause, double-digit homicide increases in St. Louis and other cities during the past several months should not be discounted as unimportant or as mere ‘random fluctuations’ in crime statistics—not when so many lives are at stake,” the Sentence Project says. “But neither should the recent increases be read as a new crime wave, at least not yet.”

The project notes that even with a 33 percent increase in crime in St. Louis over the previous year, the homicide rate last year was far below levels reached in the 1990s.

“We should watch the new increases carefully and encourage local police departments to apply evidence-based best practices in response,” the project concludes. “In the absence of credible and comprehensive evidence, sounding alarm bells over a ‘Ferguson effect’ or any other putative cause will not help.”