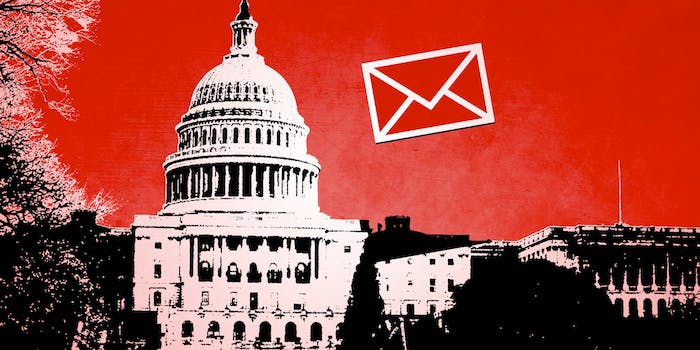 Opponents to the legislation include Facebook, Google, and Yahoo.

Civil liberties groups on Monday urged senators to reject a proposal to let the Federal Bureau of Investigation demand Americans’ internet browsing records without a warrant.

The FBI for years has pursued a change to the rules governing National Security Letters, which let the bureau demand Americans’ phone records without a judge’s approval and typically come with permanent gag orders.

Currently, the FBI cannot use an NSL to get internet data, such as a person’s broadband subscription information or their computer’s IP address or browser history. But the Senate Intelligence Committee recently approved an annual intelligence budget that adds those categories of information to the NSL statute, and the Senate Judiciary Committee may adopt a similar amendment to the Electronic Communications Privacy Act Amendments Act on Thursday.

The ECPA reform bill, which lawmakers plan to substitute with the text of the House-passed Email Privacy Act, closes a loophole that lets authorities demand online communications without a warrant if they are more than 180 days old. The bill is the product of years of lobbying by the technology community, and its supporters say that the NSL amendment dramatically undermines its goal.

In their letter to senators, a coalition of tech groups and companies—including the American Civil Liberties Union, the Brennan Center for Justice, Facebook, Google, and Yahoo—urged lawmakers to reject the change.

“The new categories of information that could be collected using an NSL—and thus without any oversight from a judge—would paint an incredibly intimate picture of an individual’s life,” the groups wrote. “This information could reveal details about a person’s political affiliation, medical conditions, religion, substance abuse history, sexual orientation, and, in spite of the exclusion of cell tower information in the Cornyn amendment, even his or her movements throughout the day.”

The letter also noted that the FBI had abused its NSL power in the past, as revealed in a 2007 Justice Department watchdog report.

“Given the sensitive nature of the information that could be swept up under the proposed expansion, and the documented past abuses of the underlying NSL statute,” the groups said, “we urge the Senate to remove this provision from the Intelligence Authorization bill and oppose efforts to include such language in the ECPA reform bill, which has never included the proposed NSL expansion.”

Sen. Ron Wyden (D-Ore.), the only member of the Intelligence Committee to vote against the NSL language, praised the letter’s signatories for keeping the issue alive.

“It is great to see so many advocacy groups and tech companies coming out against this dangerously flawed proposal,” Wyden said in a statement emailed to the Daily Dot. “There is clearly broad and growing opposition to this unnecessary expansion of warrantless surveillance authorities. Although I was the only Senator to oppose this bill in the Intelligence Committee’s closed debate, I am hopeful that the growing opposition to this provision will lead to it getting stripped from the bill once it reaches the Senate floor.”

Sen. John Cornyn (R-Texas), who sponsored the ECPA amendment, expressed confidence that it would survive, telling Politico that it was “the number one priority for the FBI in terms of counter-terrorism efforts.”