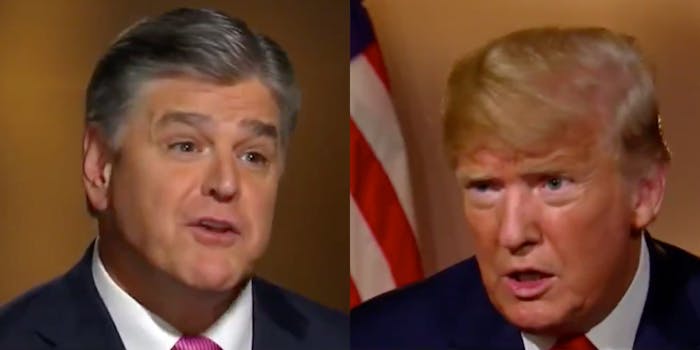 It seems Hannity is alone in thinking Trump did a good job.

“You were very strong at the end of that press conference,” Hannity told the president on Fox News. “You said: “Where are the servers? What about what Peter Strzok says? Where are the 33,000 emails?”

Trump in the Fox News interview doubled down on his comment that FBI agent Peter Strzok, who testified last week that he did not conspire to win Hillary Clinton the presidential election, is a “disgrace.”

President @realDonaldTrump: "[Peter Strzok is] a disgrace to our country. He's a disgrace to the great @FBI." #Hannity https://t.co/MP4MPLuZOS pic.twitter.com/5N7P5SIME7

High-ranking Republicans and Democrats alike lambasted Trump after Monday’s press conference. Sen. John McCain (R-Ariz.) said the press conference was “one of the most disgraceful performances by an American president in memory,” while Sen. Bob Menendez (D-N.J.) tweeted that the event was “shameful” and “jaw-dropping.”

“We had a good meeting. We discussed so many different things,” Trump told Hannity, later adding, “At the end of this meeting, I think we really came to a lot of good conclusions.”