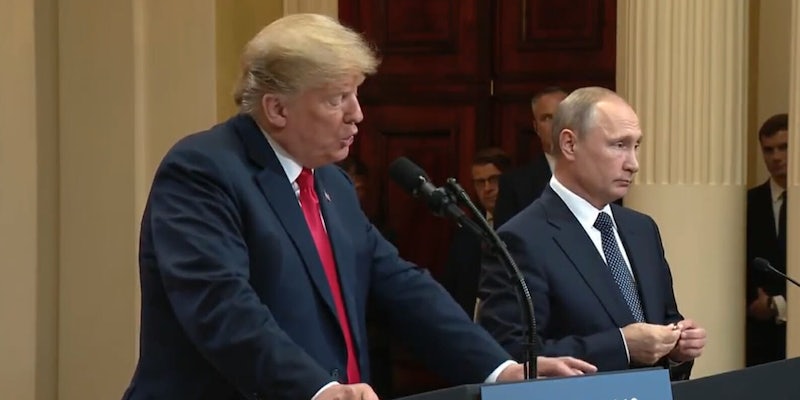 The 'pee tape' and 'compromising information' also was brought up.

President Donald Trump refused to condemn Russia for its alleged interference in the 2016 presidential election during an at times wild press conference on Monday, echoing rejections of any wrong-doing by Russian President Vladimir Putin.

Speaking during a joint-press conference in Helsinki, Trump was asked whether he would condemn Russia’s alleged meddling in the wake of the latest indictment coming from Special Counsel Robert Mueller. Mueller’s newest charges says 12 Russian intelligence officials were involved with the hacking and dissemination of information from the Democratic National Committee (DNC) and Clinton campaign.

In response, Trump attacked the FBI, and brought up a conspiracy theory surrounding a DNC server and Imran Awan, a former IT aide to Rep. Debbie Wasserman Schultz (D-Fla.). The theory was debunked by federal prosecutors earlier his month when they said Awan (who some insinuated had something to do with the DNC hack) was not involved.

Trump was asked explicitly if he would publicly condemn Russia, and instead offered this rambling answer.

“All I can do is ask the question. My people came to me, Dan Coats came to me and some others, they said they think it’s Russia. I have president Putin, he just said it’s not Russia. I will say this: I don’t see any reason why it would be, but I really do want to see the server,” he said. “But I have confidence in both parties. I really believe that this will probably go on for a while–but I don’t think it can go on without finding out what happened to the server. What happened to the servers of the Pakistani gentleman that worked on the DNC? Where are those servers? They’re missing, where are they? What happened to Hillary Clinton’s emails? 33,000 emails gone, just gone. I think in Russia they wouldn’t be gone so easily.”

Trump said Putin was “extremely strong and powerful in his denial” of election meddling during their meeting on Monday. He also took the opportunity to call the Russia probe a “disaster for our country.”

“So far, that I know, virtually none of it related to the campaign and they’re going to have to try really hard to find somebody that did relate to the campaign. It was a clean campaign,” he said. “I beat Hillary Clinton easily and, frankly, we beat her—and I’m not even saying from the standpoint—we won that race, and it’s a shame that there can be even a little bit of a cloud over it.”

But election meddling wasn’t the only thing brought up during the press conference.

A reporter also asked Putin whether Russia had “compromising material” on the president or his family, a reference to the so-called “pee tape,” a video that was mentioned in the Steele Dossier and allegedly shows the now-president with prostitutes in a hotel in Russia.

Putin laughed before answering the question.

“I heard these rumors that we allegedly collected compromising material on Mr. Trump when he was visiting Moscow,” he said through a translator, adding. “Let me tell you this: When President Trump visited Moscow back then, I didn’t even know that he was in Moscow. I treat President Trump with the utmost respect, but back then when he was a private individual, a businessman, nobody informed me that he was in Moscow… Please just disregard these issues, and don’t think about this anymore again.”

Russian President Putin, asked if Russia has compromising material on US President Trump: Do you think we tried to collect compromising information on every American businessman who came to Moscow? https://t.co/4sVbuxw36i

Trump also responded, saying that if there was “compromising material” it would have been out “long ago,” before slamming FBI agent Peter Strzok’s testimony last week, calling it a “disgrace.”