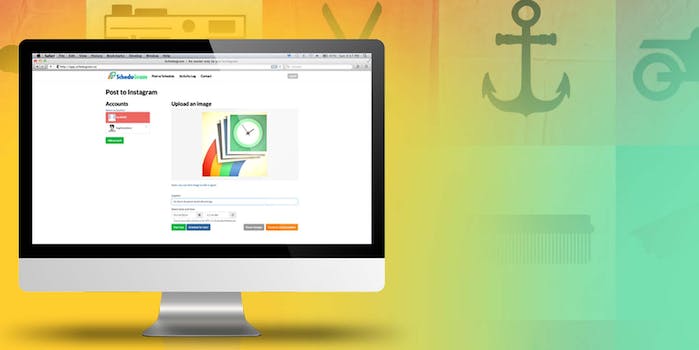 This Australian startup just came up with an ingenious way to schedule Instagram photos… and work-around the platform’s API.

Instagram is a powerful tool for brands, but unlike Twitter and Facebook, which have native and third-party tools to help power-users manage their posts, Instagram doesn’t provide either, which means people managing busy brand accounts end up wasting a lot of time.

In some ways, Instagram’s resistance to catering to power users is kind of admirable, since it implies a premium on average, non-branded users. It also means that brands have to bend to Instagram’s will, and get the same treatment all other users do. Everything has to be done in the moment (or relatively so), keeping things natural. Brands can’t schedule 18 Super Bowl-related photos to go up over the weekend, thankfully. There still aren’t verified badges or icons of any sort yet. The playing field is relatively level.

Of course, Instagram is owned by Facebook and does have advertising, so it’s not exactly an ideologically driven enterprise. And just because Instagram doesn’t allow something doesn’t mean someone else won’t go ahead and make it… especially if it’s something brands want (and would possibly pay for).

Schedugram, a service launched last week for Instagram power users, has stepped up to fill the vacuum in Tweetdeck-esque tools for frustrated social media managers. Instead of trying to find loopholes inside of Instagram’s API, the Australian startup developed its own software to help users manage their accounts from their devices. It’s a subscription-based service, so users pay between $11 and $88 a month for different packages (the “Starter” package is for a single account, while the “InstaBoss” package works with up to 20 accounts).

Although it works without going through Instagram’s API, Schedugram lets users automate their postings across multiple accounts and time zones. An analytics program is forthcoming, and the service also feature a native photo editor, if Instagram’s grainy filters aren’t enough for you.

So that’s multiple accounts, new filters, multiple users enable, timed scheduling, and even the ability to upload photos from the Web client. That sounds nothing like Instagram. In fact, it’s sort of the antithesis of Instagram; it’s supposed to be this natural, in-the-moment, sharing client. This is all logistics, no heart. It’s what Instagram users have been scared will happen to Instagram, but it’s what the advertisers desperately want.

Right now, Schedugram has around 50 clients, though CEO Hugh Stephens is keeping their identities confidential for fear Instagram will ban them for using the service. Daily Dot asked Instagram whether the photo-sharing app plans to ban brands who use the service (or if it has a way of finding out who they are), but we have not received a response.

Stephens doesn’t think antagonism would suit Instagram well, anyways. “In the next year or so, Instagram will be launching their advertising platform, so we think it’s unlikely they’d want to antagonize brands willing to invest in using their platform,” he told StartUpSmart.

And Stephens isn’t opposed to his young company getting acquired by Instagram or a social media brand management software. “We are growing every day, and while we’re going to do that slowly, in a few months we’ll have a lot of brands who are willing to invest cash into Instagram and that would make us a logical acquisition for them,” Stephens said in the same interview.

Instagram’s approach to advertising limits branding opportunities to native ads that don’t disrupt the stylized flow of the app’s feed. But even though it’s restrictive, this approach is not unsuccessful: Instagram’s first campaigns were praised for turning ads into revenue for the participating brands. Instagram has managed to be a coveted place to advertise without necessarily being a convenient place to advertise, so the company may not be persuaded to change its API or acquire Schedugram until brand managers rebel against its restrictions in a larger way.

But with 50 clients (a number that is likely growing) you might start to see some disruption in that rather natural flow of your feed.

Update: Daily Dot received a comment from Instagram regarding Schedugram. A spokesperson tells us they are looking into it now, but did not elaborate. We will update when we learn more.