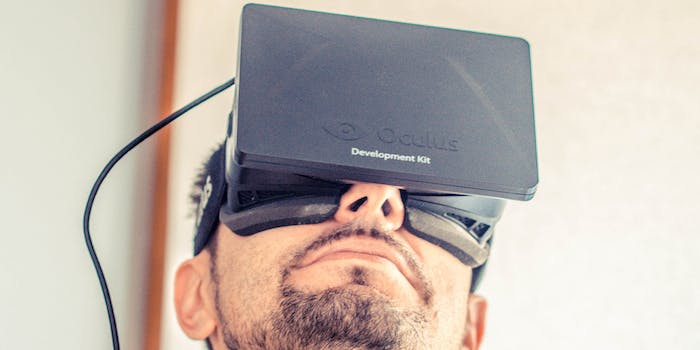 Samsung is going to create its own challenge to Oculus Rift

Oculus Rift isn't going to be the only virtual reality headset in town.

The details are a little unclear, but a number of market realities favor Samsung as more than just a casual participant in this nascent market. There is some discussion that Samsung is working with Oculus, providing the Facebook-owned company with displays for their devices in a technology sharing arrangement. While there is no way beyond speculation to determine the market size and opportunity for virtual reality peripherals, a consumer electronics company such as Samsung is always on the hunt for new products that not only add to their portfolio but extend the value of its existing products, like TVs, smartphones, Blu Ray players and mobile devices, and even the semiconductors that fuel them.

A report in The Verge states the headset is made up of a focus dial which could connect to a user’s smartphone via USB and a handheld controller that could possible connect to other devices such as gaming consoles or TVs. Discussion on Reddit speculates that an agreement between Samsung and Oculus Rift (done before the Facebook acquisition) could result in dividing the market: Oculus Rift would be the higher-end device and the consumer space would go to Samsung. How such an agreement—formal or not—sits with Facebook remains to be seen. Samsung also does not tend to be the sort of manufacturer keen to share market segments as it has opportunities in areas such as education, which is something Facebook and Oculus Rift would likely also want a piece of.

Oculus and Samsung are not alone in their pursuit of the virtual reality space. Google Cardboard is a DIY approach to VR that allows consumers to create their own headsets using cardboard and their smartphone. For $25, consumers can purchase a templated kit to build their own Google Cardboard, but for those who are marginally handy, the cost can be close to nothing.

In March, Sony announced Project Morpheus, a VR headset whose intention was to extend the power of its Playstation gaming ecosystem. The Japanese electronics company has become sending our development kits to developers but has yet to announced pricing or availability of the headset.