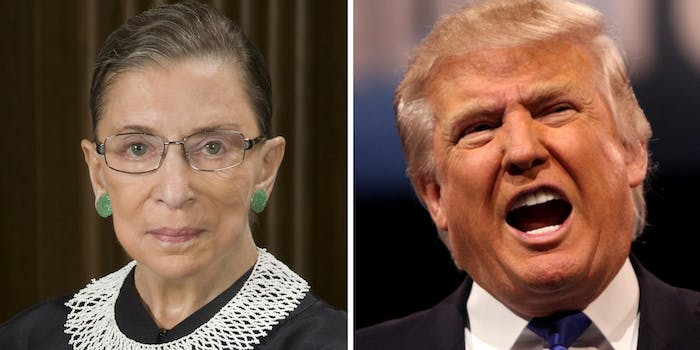 Many are siding with Trump on this one.

Donald Trump said Supreme Court Justice Ruth Bader Ginsburg is a “disgrace” and called for her resignation after she openly criticized the presumptive Republican nominee.

“He is a faker,” Ginsburg, 83, said of Trump in an interview with CNN on Monday. “He has no consistency about him. He says whatever comes into his head at the moment. He really has an ego. … How has he gotten away with not turning over his tax returns? The press seems to be very gentle with him on that.”

Ginsburg, a liberal justice, then jokingly said she would move to New Zealand if Trump were to win the November general election.

Ginsburg’s comments to CNN follow an interview with the Associated Press published on Friday, in which the Supreme Court justice said she couldn’t imagine the impact of a Trump presidency.

On Tuesday night, Trump responded to Ginsburg’s criticism by calling it “a disgrace.”

“I think it’s highly inappropriate that a United States Supreme Court judge gets involved in a political campaign, frankly,” he told the New York Times on Tuesday. “I think it’s a disgrace to the court, and I think she should apologize to the court. I couldn’t believe it when I saw it.”

Trump later reiterated his criticism in a tweet posted on Wednesday, in which he questioned her mental capacity and called for her resignation

Justice Ginsburg of the U.S. Supreme Court has embarrassed all by making very dumb political statements about me. Her mind is shot – resign!

As the Washington Post and CNN both report, it’s highly unusual for justices to weigh in on political issues, especially presidential politics. In fact, according to the Times, Ginsburg’s remarks could give Trump enough material to make a public relations case that the justice don’t treat him fairly. In Trump’s own interview with the Times, he predicted that Ginsburg’s comments would help him win the election.

“It’s so beneath the court for her to be making statements like that, Trump said. “It only energizes my base even more. And I would hope that she would get off the court as soon as possible.”

The editorial boards of the New York Times and the Washington Post have decried Ginsburg’s comments as inappropriate for a Supreme Court justice. “However valid her comments may have been, though, and however in keeping with her known political bent, they were still much, much better left unsaid by a member of the Supreme Court,” the Post editorial board wrote.

After Ginsburg’s comments, Trump has garnered support from many GOP members, including Sen. Marco Rubio (R-Fla.) and House Speaker Paul Ryan (R-Wis.), who said her comments were “out of place.”

How can a #SCOTUS justice involved in partisan attacks during campaign be impartial in any cases involving a Trump administration?

“I find it very peculiar, and I think it’s out of place,” Ryan said in an interview with CNN. “For someone on the Supreme Court who is going to be calling balls and strikes in the future based upon whatever the next president and Congress does, that strikes me as inherently biased and out of the realm.”

Update 10:44, July 14: In a statement released on Thursday, Ginsburg apologized for her comments about Trump.

“On reflection, my recent remarks in response to press inquiries were ill-advised, and I regret making them. Judges should avoid commenting on a candidate for public office. In the future I will be more circumspect,” Ginsburg said.