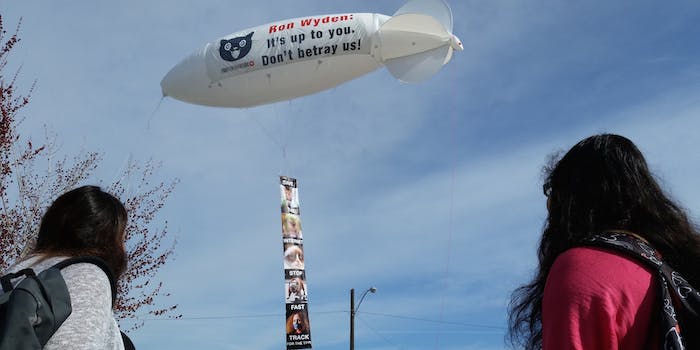 Ron Wyden is under pressure due to controversial trade legislation

The tug-of-war over Sen. Ron Wyden’s (D-Ore.) loyalty continued on Friday as open Internet activists—many of whom are typically fond of Wyden’s positions—began trolling him at town hall meetings with a 30-foot blimp.

The senior lawmaker, whose support of strong digital privacy protections has been vital for civil liberties, is trapped between a quintessential rock and a hard place. The fate of a bill to give the White House special authority in trade negotiation rests on the shoulders of Wyden as the ranking Democrat on the Finance Committee. However, a new trade deal, known as the Trans-Pacific Partnership, or TPP, is fiercely opposed by many of his usual supporters, activists who traditionally laud him for being the Internet’s most ardent digital-rights defender, due to its rules surrounding copyright, privacy, and its implications for free speech online.

The authority President Obama has requested would allow his office to negotiate international trade agreements and submit them in Congress for a simple up or down vote. In other words, lawmakers could not amend the agreements or try to kill them on the floor with unreasonable demands.

The White House is presently negotiating the TPP with 11 other countries along the Pacific Rim. The Obama administration is seeking to “fast track” the authority bill to allow the negotiations to proceed without impediment. The talks have been largely held behind closed doors, with journalists and public advocates blocked from observing. Throughout the process, Obama has enjoyed the majority support of Republicans; however, many Democrats concerned about blowback on U.S. manufacturing have refused to fall in line.

Digital rights nonprofit Fight for the Future on Friday organized the demonstration undoubtedly witnessed by Wyden and his town hall attendees. Behind the blimp, which flew over Clara Brownell Middle School in Umatilla, Ore., this morning, a large Grumpy Cat banner read: “Ron Wyden: It’s up to you. Don’t betray us! Save the Internet. No Fast Track for the TPP.”

“Senator Wyden has been a strong supporter of Internet freedom issues during his entire career,” Fight for the Future campaign director Evan Greer said in a statement. “We are shocked that he is considering supporting anti-democratic fast track legislation that would allow the future of the Internet to be decided behind closed doors. We are flying this blimp across Oregon because Senator Wyden needs to know that the Internet is depending on him, and where he stands on this issue will decide whether he is remembered as a hero or a traitor.”

Leaked drafts of the TPP agreement last year led many, including Fight for the Future, to publicly criticize the administration’s efforts with regards to  intellectual property norms. Established digital rights groups, such as the Electronic Frontier Foundation (EFF), claim the proposed changes would stifle freedom of expression. Others suggest the U.S. demands would broaden and strengthen patent monopolies on vital medications, delaying, for instance, affordable cancer treatments in many countries.

Central to the fight over Wyden’s support are data-flow provisions in the agreement that may enable companies to discourage strong privacy laws abroad. Privacy regulations, activists argue, shouldn’t be decided behind closed doors or created purely to serve the needs of multinational corporations.

For his part, Wyden has publicly opposed the level of secrecy around the TPP negotiations, telling reporters earlier this month: “If you believe deeply in trade as I do, and you want more of it, it doesn’t make sense to have all this secrecy that makes the public cynical about what’s going on.”

Regardless, the senator may have to get used to being shadowed by the Grumpy Cat blimp. Fight for the Future intends to deploy it at three additional town hall meetings in Oregon over the weekend.

Photo via Fight for the Future