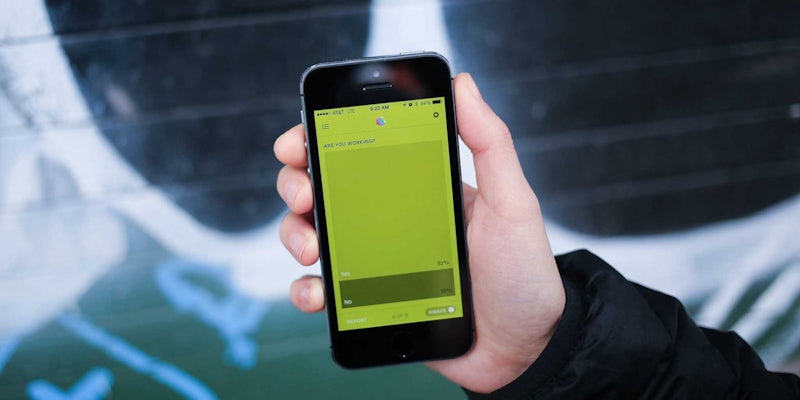 When quantified-self apps leave you with more questions than answers

Life is too messy a thing for any app to play scientist with.

Don’t even try and answer those questions yourself, because Reporter can do it for you—and it can do it better.

“Reporter is a new application for understanding the things you care about,” the website for Nicholas Felton’s new, $3.99 app declares. Felton was the lead designer on Facebook’s Timeline and Open Graph. The app’s launch has garnered much buzz, and this being the Quantified Self’s moment, the hype could parlay into some serious use from people interested in better understanding themselves.

I decided to install and use Reporter for three weeks, to see if I could quantify myself. So how does the app help me do this? According to its description: “With a few randomly timed surveys each day, Reporter can illuminate aspects of your life that might be otherwise unmeasurable.”

But if an aspect of your life is unmeasurable, how is something like Reporter going to illuminate it? Largely, by playing question and answer with you. But I found that Reporter’s answers to my answers to its questions only left me with more questions.

First, more about these questions: The app comes with seven questions pre-loaded. When a user Reports, the app notes the weather, whether you’ve taken any photographs since the last time you Reported, and how loud it is where you are. It asks you if you are working. It asks you what you are doing—you write in activities that can then be selected again (i.e. “drinking coffee,” “writing,” or “waiting for the subway”). It asks you where you are, populating with choices provided by Foursquare. It asks you who you are with, offering options from your contact list.

When you go to sleep, if you remember to tell Reporter that you are going to sleep, it will ask you how many coffees you had today, and what you learned.

When you wake up, it asks you how you slept. 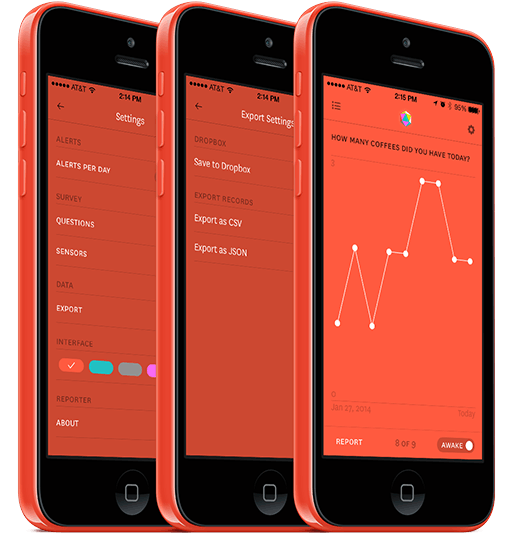 If these seem limited, users can write their own questions. “Do you feel alienated from the means of production?” could be one. “Are you black-out drunk right now?” could be another. Over time you could accumulate answers to these questions: A preponderance of “yesses” might indicate that you are a member of the proletariat, or an alcoholic. Or both!

Certainly there is an answer to the question, “How many panic attacks did you have today?” But is that really the right question? Perhaps. Perhaps not. I think the more important question is “Why did you have a panic attack?” but that one is also a lot more dificult to answer. But the former question, the simpler one, is the only one an app can find someting quantifiable, aggregateable from.

Maybe you had a panic attack because you are not sleeping well, for example, because you’re suffering from anxiety or depression, fears about your career or family or friends. Perhaps you spend so much time alone because nobody loves you. Who knows? Reporter doesn’t.

And what about all the questions Reporter doesn’t ask, and that you don’t have the premonition to tell it to ask? Case in point: How much did you flirt with the woman behind the counter at the coffee shop? How many times did you roll your eyes in that meeting? Which songs sprang in your head, sticking there, seemingly unprompted, only for you to realize that they were not unprompted, that you’d overheard a word that reminded you of a memory that led you to an association that brought you this song? These things are possibly important (possibly not). Regardless, they are not things the app can measure and make conclusions from.

Reporter removes you, necessarily, out of the experiences that it strives to quantify—therein lies a significant flaw. Reporter tells me that I spend the vast majority of my time alone—77 percent of my time, in fact—probably because I usually only bother to respond to its prompts when I am, in fact, alone. It’s rude enough to answer text messages or emails in the middle of a conversation without adding something like this into the mix (“Pardon me, I need to tell my Quantified Self app we’re having dinner together”). 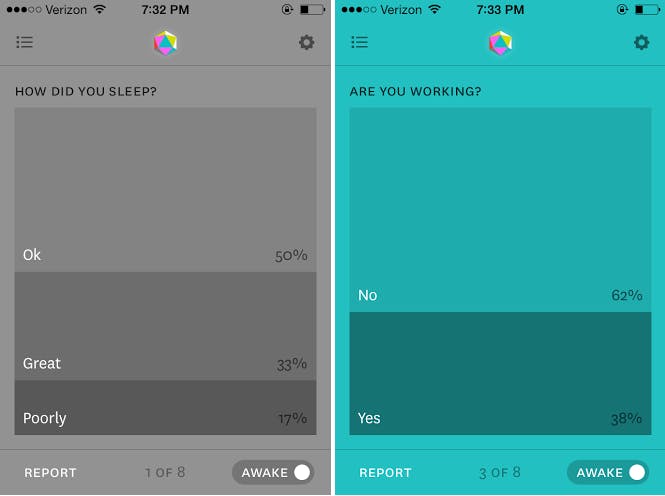 And while Reporter tells me that I only spend 35 percent of my time working, this is probably because if I am working, I don’t want to be interrupted. (To this end, I wonder if there is a way for the app to tell me how many times I have ignored its notifications.)

Moreover, what of those experiences even more explicitly antithetical to quantification? What if the answer to “What are you doing right now?” is “Having sex” or “Riding a jet-ski”? Are you really going to pull yourself out of that situation to plug into an app?

But then, I’m probably not the best person for something like this. I don’t use Foursquare, I don’t use location check-in on Facebook. I tweet a lot, but it’s mostly nonsense. I don’t have a whole lot of use for “data” about myself. In the rare event that I remembered to Report before going to sleep, I usually didn’t remember to do so when I woke up, leaving pretty massive holes in the data for that day—or days.

So what is it, exactly, that we are supposed to learn about ourselves by using this kind of technology? Is it motivated by the Classical drive toward self-knowledge, the invective to “Know Thyself” of old? It hardly seems that the aggregated answers to any question as banal as “What are you doing right now?” could move us any closer to self-discovery. 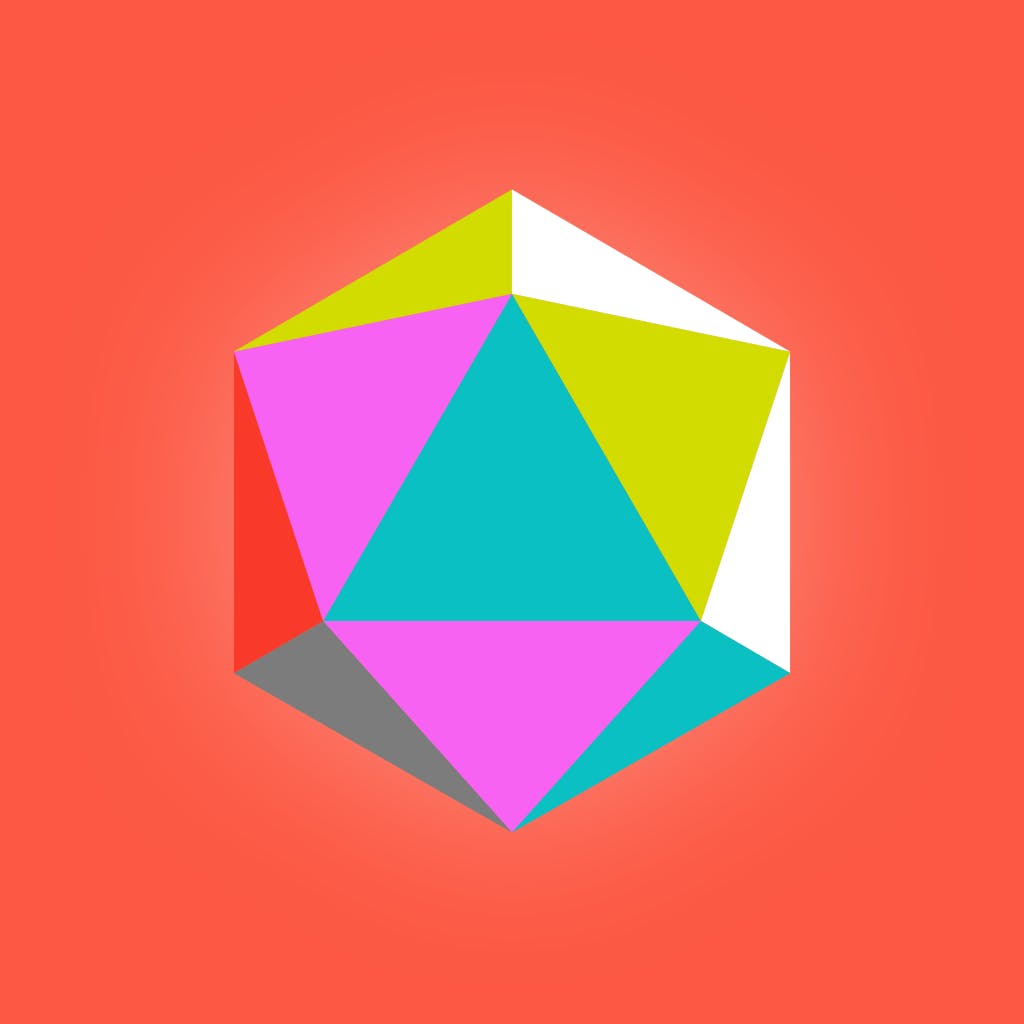 “The act of ‘reporting’ (in Felton’s terminology) is kind of like journaling,” writes the Verge’s Ellis Hamburger, “a practice that’s therapeutic, but provides the most real value in hindsight and in aggregate.”

This seems…misguided. If anything, it is in hindsight and in aggregate that you realize what a waste of time and energy tracking this kind of information really, how little it all adds up to. Reading back through journal entries is a profoundly emotional experience: often painful, usually comic. We are ridiculous creatures full of ridiculous thoughts about a ridiculous world—all manner of problems and troubles both real and imagined, perspectives lost and gained. Journals offer us a self-portrait that we can consider later and realize not only who we were but who we thought we were, and who we became—or who we thought we became. Like the Reporter app, journaling takes something utterly dynamic—your personality, your feelings, your entire personhood—and renders it static, turns it into an object on the page or the screen. But the major difference is that journaling involves storytelling while Reporter is just… information.

Way back in 2010, Zadie Smith skewered the categories into which Facebook forces its users. She wrote:

When a human being becomes a set of data on a website like Facebook, he or she is reduced. Everything shrinks. Individual character. Friendships. Language. Sensibility. In a way it’s a transcendent experience: we lose our bodies, our messy feelings, our desires, our fears. It reminds me that those of us who turn in disgust from what we consider an overinflated liberal-bourgeois sense of self should be careful what we wish for: our denuded networked selves don’t look more free, they just look more owned.

In fact, Smith gestures to Felton’s Open Graph API as the ne plus ultra of this phenomenon, something that, in providing you with information about what your friends are reading and watching and eating—in a word, what they are consuming—encourages you to do the same. Facebook in general and Open Graph in particular, Smith argues, reproduces a kind of pack mentality.

But the Reporter app is a different kind of project. It is private, more personal—not narcissistic necessarily but more self-centered. “Snapshot your life,” Reporter commands. But why? And why in this way?

Felton did not respond to a request to be interviewed for this story. On his personal website, however, he writes, “Ultimately, my life tracking is more about recording and preserving my activities than in changing my behavior.” Meanwhile, Hamburger reports that Felton believes in a decade this kind of data collection will be completely ubiquitous and automated. “It’s not yet clear what kind of discoveries personal measurement will yield,” Hamburger writes, “but they’ll span the entirety of our lives from our health to our productivity.”

Hamburger is correct in saying that it is not clear what will come of a world in which every aspect of our lives is tracked, every behavior quantified (such as it might be). If history is any example, however, it seems likely that the quantification of individuals’ lives will be conducted in the service of increasing productivity, ensuring that every ounce of value is squeezed out of the entirety of our existences. All the better if we’ve been habituated to doing it ourselves.

The problem with self-quantification is that it is always already reductionist, and reality—lived reality—is, fundamentally, irreducible. For about a year, I used the fitness tracker Fitocracy. I logged in every exercise, every workout, every physical activity. That data was represented back to me in the form of graphs and points accumulated and timelines. But no matter how many “Good job!” notifications I received for surpassing a previous personal best, the real satisfaction of the whole endeavor came in moments that are inherently unquantifiable—getting a rebound in a pickup basketball game, or pinning a friend while wrestling, or the simple, sweaty, slightly dizzy pleasure of lying in the grass after running a bunch of sprints.

The aspects of our lives that make us who we are—the people we love and the people who love us, our passions and obsessions, our flaws and our work and our deepest, darkest secrets—clearly surpass the imagination of apps like Reporter. What dull lives we would lead if these (“How many cups of coffee did you have today?”) were the most important questions we could ask ourselves.

But maybe I reject Reporter because it presents things that I don’t like about myself back to me. That I spend so much time alone. That I’m not productive (read: prolific) enough. Maybe it forces me to ask questions like, “Why is that the case?” Then again, if this is what it took to get me to wonder about those kinds of things than my problems are much deeper than any app is going to resolve.

Sure is a pretty user interface, though.