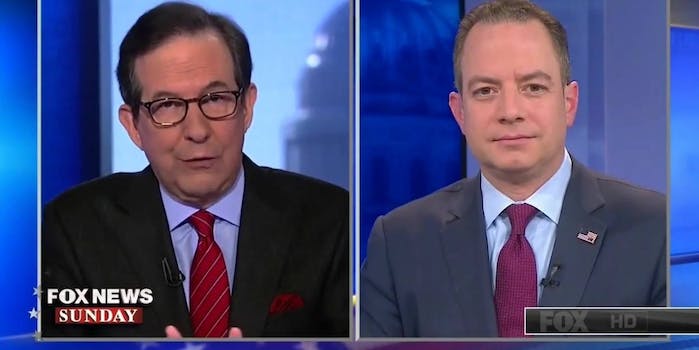 But does Donald Trump accept these conclusions?

Though the U.S. intelligence community has made it clear that Russia was behind the hacking of the 2016 election and did it to help Donald Trump and hurt Hillary Clinton, the president-elect has been reticent to blame and/or credit Vladimir Putin and the Kremlin for his victory.

He’s blamed the Democrats for getting hacked, and he said he wants to know who leaked information to NBC. And while some members of his party have said Russia wants to destroy America’s democracy, Trump has talked more about making friends.

But on Sunday, Trump’s incoming chief of staff, Reince Priebus, admitted to Fox’s Chris Wallace that, yes, Russia was behind the election hacking and that even Trump has accepted the intelligence community’s findings.

But Priebus also made the point that election hacking wasn’t a new phenomenon.

“But here’s the thing that everyone needs to understand. When this whole thing started, it started from the Russians 50 years ago. In other words, this is something that’s been going on in our elections for many, many years. The Russians, the Chinese, the Iranians—it happens, every election period.

“… It started way back in 2015 before either nominee of either party was chosen. And it started, and this is declassified, as a spear phishing expedition. It just so happens that the DNC had nearly no defenses on their system.”

The report issued by the intelligence community Friday also said Republicans were hacked but the information was never released.