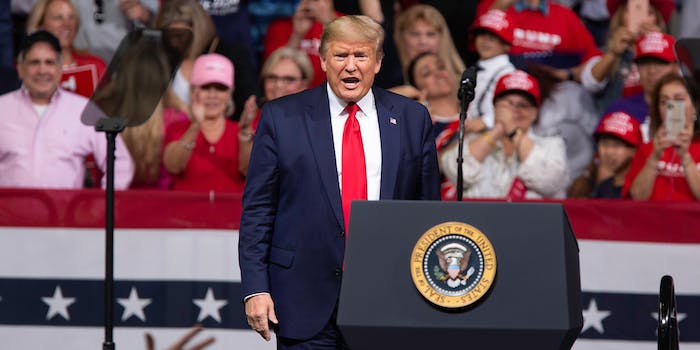 It’s vital to remember that at heart, QAnon is about Trump seizing total control of the government to crush his enemies.

Earlier this month, one of the most prolific promoters of the QAnon conspiracy theory, David “Praying Medic” Hayes, shared a sentiment that President Donald Trump himself has expressed many times: that Trump should, through some unknown legal process, be “given” additional time in office.

In response to a story from the Hill quoting Michael Cohen that Trump wants to “change the Constitution” to serve 12 more years, Hayes wrote simply “we can only hope.”

Hayes isn’t even the only major voice in the Q world to endorse the “extra term” idea. Both Joe M. and Inevitable ET—Q promoters with major influence in the movement—appear to have given at least some credence to Trump awarding himself extra terms.

The Q movement is not just a kooky internet thing, or even a “collective delusion.” It’s an inherently proto-fascist cult that holds Trump up as a divinely chosen figure picked out to usher in a violent purge of America’s enemies. With that in mind, it’s not surprising that Q promoters support Trump tossing out part of the Constitution, or the election results, or the basic laws of due process simply because he wants to. This is what Q’s followers want Trump’s America to look like, because they believe America’s enemies, who are also citizens of this country, have done terrible things and deserve to be punished for it.

Despite the conspiracy theory’s massive growth in wellness and social media influencer circles related to saving children from mythical trafficking rings, it’s vital to remember that at its heart, Q is about Trump seizing total control of the government to crush his enemies.

Q’s mythology centers around a massive sweeping up of a vast cabal of supposed socialist saboteurs, pedophiles, traitors, and enemies of the Republic done either illegally or under rules designed specifically for military tribunals. The disappearing and secret trial of the leader’s enemies is a hallmark of fascism, and it’s critical to understand that this is what Q is about.

And it has been from the very beginning.

The very first Q posts told a fantastical story about Hillary Clinton and her allies being swept up, the National Guard deployed, and the president sequestered during this massive crackdown—an event that early Q devotees referred to as “the storm.”

That name comes from when Trump used the phrase “the calm before the storm” when flanked by rows of high-ranking military officers. So if, as QAnon believers desperately want, Trump is going to violate federal law to use “his generals” to command a domestic police force that will arrest and execute his enemies without due process, why wouldn’t he go the extra mile and ensure that he’s in power until he chooses not to be?

Major figures who have expressed favorable opinions about QAnon are using rhetoric that longs for America to embrace a violent dictatorship and a president taking unconstitutional steps. These aren’t fringe social media characters with little following or Russian bots, but highly connected mainstream conservative figures that President Trump listens to. And they’re increasingly talking about Trump brutally grabbing more power.

Last week, news broke that the former head of the CIA’s efforts to find Osama Bin Laden, Michael Scheuer, is a major QAnon believer who has routinely spoken of “loyal Americans” eliminating their domestic enemies and of being upset if an oncoming second American Civil War didn’t end up with a high enough Democratic body count.

While those not used to the rhetoric of Q believers might have been shocked, such open talk of killing Trump’s enemies is common in the movement. And Scheuer isn’t the only one. Roger Stone, the longtime political operative whose indictment was commuted by Trump, urged the president to exercise dictatorial and non-existent presidential power to ensure his re-election by declaring martial law and seizing total power.

In an appearance on InfoWars, Stone demanded that Trump send federal marshals to seize ballots in Las Vegas and invalidate the entire electoral slate of Nevada if the president loses, while arresting the heads of major social media companies, along with the Clintons, other prominent Democrats, and media figures. Trump’s commutation of Stone’s seven felony convictions for witness tampering and lying to Congress already has the hallmarks of a dictatorship, with the loyalty of a leader’s crony being put above the sanctity of the criminal justice system. So if Trump can wave off one of his people lying to the body that traditionally acts as a check on the presidency, what else might he be willing to discard for his own aims?

Like Scheuer, Stone has publicly endorsed QAnon. In a July interview with prominent Q promoter InTheMatrixxx, Stone said only, “I certainly hope Q is real and there [are] a number of indications that the information that is being disseminated has been of enormous value in this fight for freedom.”

Beyond that, Trump’s appointed Director of National Intelligence, John Ratcliffe, follows a number of QAnon accounts on social media, and QAnon reveres Michael Flynn, the former high-ranking U.S. intelligence official who was National Security Adviser for three weeks. Flynn, in turn, routinely tweets and speaks favorably about Q—to the point where in July, Flynn took an oath to become a “digital soldier,” fighting against the forces of evil using memes and trolling.

All of these are critical figures in Trump’s orbit, who have held or still hold high-ranking positions of power. Roger Stone has been a campaign consultant for Republicans for four decades and holds enormous influence with the far-right. Scheuer had the highest level security clearance and ran a critical operation for the CIA. As DNI and former National Security Adviser, Ratcliffe and Flynn were some of the highest-placed officers in the entire military apparatus. And all have vocally endorsed or given credence to QAnon—a theory built around the president using power he doesn’t have to make himself a kind of American dictator. Even though Stone, Flynn, and the others haven’t expressly endorsed Trump violating the 22nd Amendment, what QAnon entails is much the same thing: power beyond the bounds of the president’s office.

The link between Trump seizing power and belief in QAnon isn’t limited to well-known figures in his orbit, either. Lauren Witzke, who won the Republican Senate primary for Delaware despite promoting QAnon, recently declared that she could “get behind” a “lifelong term” for Trump, answering a podcast host who asked her if she “would like to see Trump as king of the United States.” Witzke is unlikely to win her election, but even just to hear a candidate endorsed by the Republican Party make references to the president holding office for life is jarring.

The president ordering a massive military operation to arrest people under secret indictment and execute them after a cursory trial is not legal. Nor is the president awarding himself more time in office than the voters give him. Yet, this is what self-declared patriots in the QAnon movement want: a president who takes total power and uses it for his own ends. This ideation should be taken seriously, because serious people with major followings have endorsed it.

Ultimately, the final outcome of the story that Q has been spinning is a massive power grab by the president, used to violently crack down on people who have stood in his way, or simply irritated him in some way. And it’s a story that an increasingly large number of people have endorsed.

So if fascism really comes to America, hundreds of thousands of people will be cheering it on. Because QAnon created a ferverent fanbase for it.