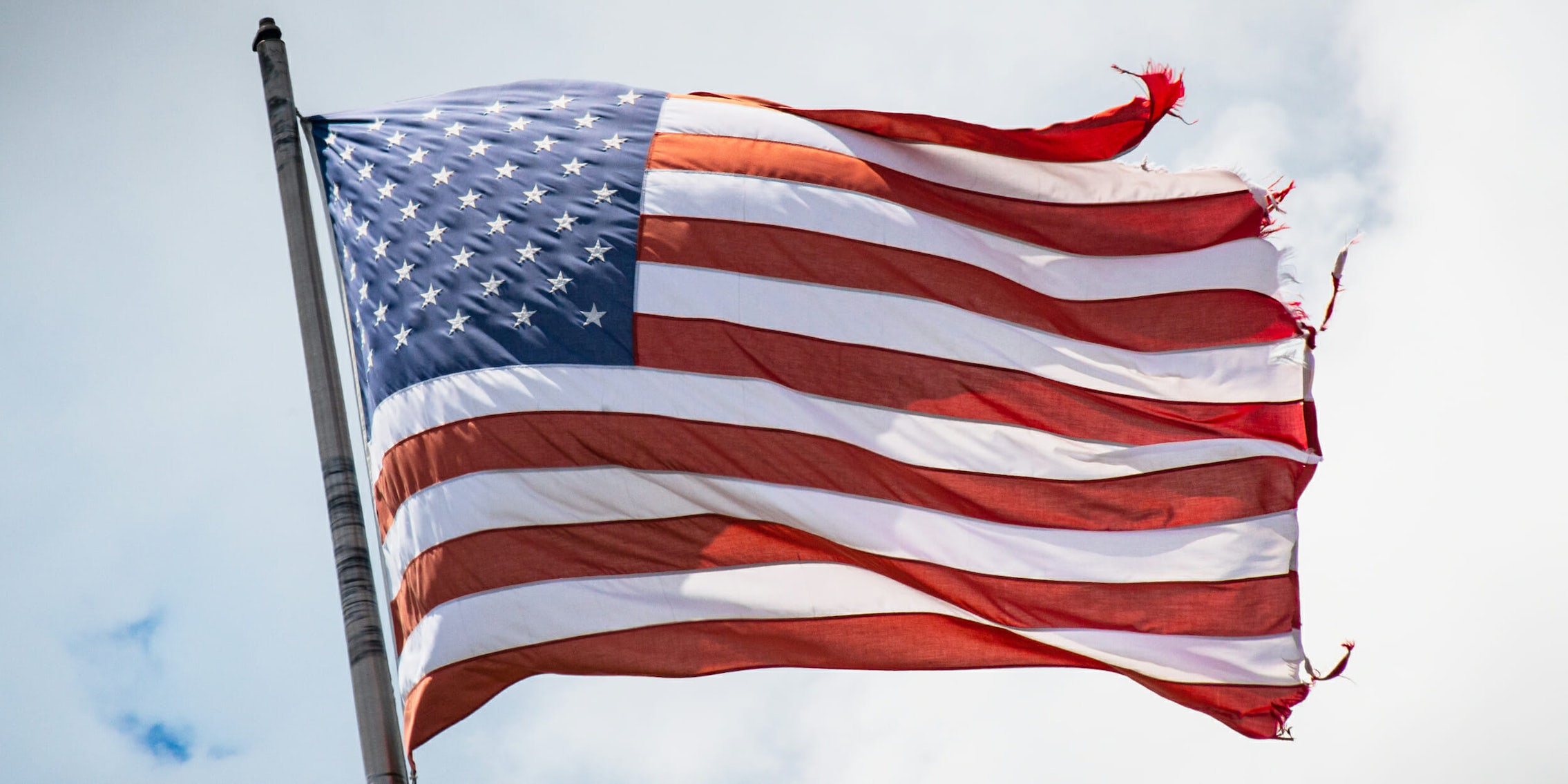 The rhetoric gets more violent by the day.

The growing schism between the two sides of the American political spectrum has resulted in a surge of chatter about what amounts to a breakup of the United States.

Some people optimistically see such dissolution as a “national divorce”—two once-alike partners mutually agreeing to go their separate ways. Others are less optimistic, believing that the need for conservative America to separate itself from its liberal brethren can only be accomplished through violent uprising: a “Second Civil War.”

The Second Civil War rhetoric even reached the halls of Congress, when Rep. Steve King (R-Iowa), tweeted a meme about the hypothetical clash between red and blue states.

And if any of the popular writing about such an event is to be believed, such as was highlighted in a piece at the moderate conservative site the Bulwark, it will be nothing less than a crazed melee of street-level brutality. But conservatives will come out on top because, hey, they’ve got all the guns.

Right-wing believers in the need for a violent end to the American Experiment usually cite the impossibility of freedom coexisting with the left’s demands for socialism, equality, and the erasing of past cultural prejudices. Of course, it all started with Obama. But it also seems counterintuitive that right-wing talk about breaking away from the United States is cresting at a time when the United States has an almost entirely right-wing government.

Conservatives "underestimate the extent to which the racism of the alt-right has insinuated itself into their movement."@UrbanAchievr takes a look at the appalling books of @KurtSchlichter–sadly, praised by mainstream conservatives–so you don't have to.https://t.co/2Ul0yBVJI2

Conservatives control the White House, Senate, Supreme Court, and dozens of state legislatures. The last time a far-right movement became obsessed with violently opposing the powers that be was at the start of the Clinton years, when homegrown militias stocked up for war, feared mass gun confiscation, and pointed to the burning of the Branch Davidian compound and the shooting of Aryan Nations member Randy Weaver’s family as examples of the Democratic tyranny to come.

In this case, what, exactly, would this “national divorce” be from?

Conservatives from their own Republican-controlled government? Trumpists from non-Trumpists? When the Confederacy broke away from the Union, it was in protest against what it believed were the tyrannical anti-slavery edicts of the abolitionist executive branch. But when you yourself control the executive branch and find it to be perfectly acceptable, what is it that you’re rebelling against?

To find a clue as to what the far-right’s anger might become focused on, it’s helpful to look at the conspiracy theory that more and more conservatives are being pulled into: QAnon.

In QAnon, a government insider is alerting patriots to an upcoming series of events usually called “the storm” or the “great awakening.” The details have evolved over time, but it always ends the same way: a vast unsealing of indictments against evildoers, military tribunals, field executions, and a collapse of the current American way of life that leaves armed patriots on their own against the liberal horde.

Both the Second Civil War (SCW) and QAnon’s concept of “the storm” are essentially a violent upheaval that will clear out the old order in favor of a new one.

They both involve a corrupt liberal upper class being rooted out in favor of a patriotic, family-focused, God-fearing, more American new beginning. The anger of both “national divorce” believers and QAnon believers is focused first and foremost on the Clintons, Obama, and the political and cultural celebrities in their orbit. Get rid of them, they reason, and traditional American Judeo-Christian values can’t help but make a long-awaited return.

If the movements have a nexus, it comes in the form of Alex Jones, a former Q supporter who also advocated for armed insurrection.

Jones has been a staunch messenger for what he deems to be an imminent Second Civil War, describing it at various points as “inevitable,” currently occurring, being “directly planned” by the left, “directed” by the mainstream media, and already having its first shots fired after the shooting of Rep Steve Scalise (R-La.) in June 2017.

Jones even posted a video of him and former Trump adviser Roger Stone “training for the next civil war” by firing automatic weapons at a gun range.

All the while, he’s railed against deep state operatives working against the will of the people.

But while the SCW and “the storm” do share a number of similarities, but they’re also very different on fundamental levels.

And the differences illustrate the growing schism between QAnon believers and more mainstream conservative pundits who have advocated for a national divorce, yet find the complex conspiracy theory put forth by Q to be ludicrous.

One of these is true:

1. @JackPosobiec @ScottAdamsSays and I are right that Q is mildly entertaining but ultimately counterproductive nonsense; or

2. We 3 are Deep State shills only now revealing our true colors in a desperate attempt to silence a magical secret whistleblower. pic.twitter.com/ICLlEQObVv

The Second Civil War, at least the one articulated in popular conservative rhetoric, is a breakup of the country that ranges anywhere between legal secession (which doesn’t actually exist) and a response by real Americans to the U.S. government’s attempts to grab their guns.

It doesn’t have to be violent, and indeed, one of the more high-profile national divorce pieces, written by Jesse Kelly in the Federalist, goes out of its way to describe it as a peaceful process.

But much of the more inflammatory writing about the Second Civil War, such as the Kurt Schlichter books highlighted in the Bulwark piece, or in The Handmaid’s Tale, is full of carnage—shootings, sexual assault, even nuclear strikes on Washington by disgruntled Americans. All are perpetrated either by evil government operatives against patriots or by patriots striking back.

On the other hand, the more extreme versions of the Second Civil War are standard issue for QAnon, whose followers routinely post on social media about the various ways that members of the deep state will be dispatched.

Theoretically, there might come a day where the states that make up America decide they can’t be in the same nation anymore, but QAnon can’t exist without a violent removal of the anti-Trump forces at the heart of the administrative state. They don’t believe themselves to be violent, but their actions and posts reveal a different story.

Fake News are telling us that Q supporters are violent criminals, and even perpetrators of mass shootings, yet the president keeps elevating Q by retweeting them. Why does NOT ONE SINGLE reporter confront him about Q if it is such a threat? WE KNOW! Q+https://t.co/toPpagkxPR

And the actual perpetrators are completely different. In QAnon, the U.S. government itself will be carrying out the purge, or at least the parts of it that haven’t been infected by the deep state.

Going back to the first posts Q made, there are detailed descriptions of the National Guard being called up, military law superseding civilian rule, law enforcement unsealing indictments, and elite special forces troops carrying out smash-and-grab extractions of bad guys. The mechanisms of how “the storm” will be started and carried out involve arcane methods of declassifying information and invoking special executive orders. It’s not just grabbing your shotgun and shooting the tax collector.

In the Second Civil War, these forces are the bad guys, enforcing the laws of a corrupt and tyrannical government. But in QAnon, these are the good guys. In one, they are fighting tyranny. The other, deep state pedophilia. But the nexus of the both is the same: the government can’t be trusted.

Of course, neither of the most violent scenarios is likely to come to pass. The entire Civil War was fought because of the illegality of the Confederate states attempting to break away from the Union to preserve slavery. And QAnon has never proven itself to be anything other than a conspiracy theory and prophecy cult.

But there might come a day when it no longer serves the interest of the American people for the United States to stay together. Should such a day come, expect a process much more akin to Brexit—chaotic, confusing, and frustrating, not the violent bloodletting foreseen by the worst-case scenarios of the “Second Civil War.”