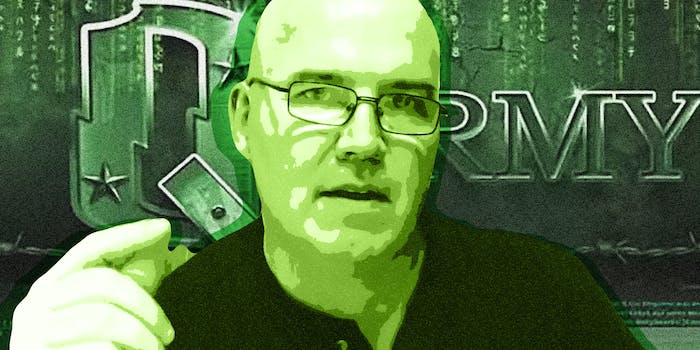 Since first emerging in October 2017, the QAnon conspiracy theory has gained a massive following among President Donald Trump supporters eager to see justice doled out to the deep state.

But love for Q’s wild theories, riddles, rhetorical questions, and predictions is not unanimous among conservatives. A number of prominent Trump supporters have denigrated the conspiracy avatar and its growing throng of believers as a risk to Trump’s reelection.

Those conflicts have now exploded into open warfare, as QAnon used several “drops” to attack the Sebastian Gorka-linked pro-Trump PAC MAGA Coalition, whose members are fighting back by going after Praying Medic, a prominent QAnon “decoder” who has risen to the top of a crowded swamp of Q personalities by fusing evangelicalism with conservative politics, questioning his charity’s tax-exempt status.

And in doing so, they feel they’ve cracked the entire conspiracy wide open.

While it might seem like hopelessly insular infighting among semi-anonymous internet personalities, the feud between Medic and MAGA Coalition is also a window into the shadowy world of who exactly is profiting off of the Q movement, and possibly the identity of the person or people making the Q drops.

In the world of Q, authentic support of Trump is prized and “paytriots” who attempt to profit off the movement are derided as “fake MAGA.”

And at first glance, Gorka seems like a perfect candidate to be a Q evangelist. His firing by the White House hasn’t dimmed his devotion to Trump, and he’s also a frequent mouthpiece for Q-endorsed conspiracy theories, such as the notion that Ruth Bader Ginsburg is secretly being hidden and kept alive by powerful drugs.

But Gorka has also regularly attacked QAnon as “garbage.” And no matter his fealty to Trump, his derision of Q makes him a target.

Why did you get your wife to start Maga coalition and then take all that money out of it that was supposed to go towards getting Trump re-elected? Kinda shows us why you bash Q. Disappointing.

As such, Q used his platform to go after the small pro-Trump PAC MAGA Coalition on Mar. 25, intimating that the fund, for whom Gorka briefly served as an advisor, paid out a large amount of donor money to a convicted scam artist. The post ended with links to the FBI and IRS tip lines, and the implication was clear: MAGA Coalition had committed not just fraud and misuse of donor money, but the ultimate crime of being fake MAGA, and Gorka had played a part in it.

The pro-Q, anti-Gorka offensive went a step further the next day. Despite Gorka having left MAGA Coalition after only a few months to take a paid contributor position with Fox News, he was doxed (having his personal information made public) on the 24-hour QAnon live stream PatriotsSoapbox; and physically threatened by Praying Medic during an interview on hyperbolic, Trump-supporting media personality Bill Mitchell’s YouTube show.

Medic, the “divine healer” known in the real world as David Hayes, is an EMT and prolific author from Arizona, who claims that God spoke to him and transformed him from a hedonistic atheist into a spiritual healer.

His “ministry” is an actual IRS-accredited charity called “Praying Medic,” and he’s written a long series of books attempting to teach people to transform their lives through prayer and Bible study. He’s also a force in Q-related social media, amassing nearly a quarter of a million YouTube subscribers, a massive Twitter following, and an established presence on popular pro-Trump media outlets.

During his interview, Hayes told Mitchell that Gorka needed to be “careful about what [he] says and does,” and insinuated that “10,000 anons” (the Q-approved term for followers who share Q posts and decodes on social media) would be digging into his personal life as part of an “aggressive stance.”

At that point, the “aggressive stance” was instead taken up by the anti-Q, pro-Trump faction in the MAGA Coalition, who went to bat for Gorka, despite him having left the group for Fox News.

“In the end, all grifting aside, [QAnon] is a quixotic cyber adventure that simultaneously cultivates unrealistic fantasy and matches it with glaringly un-American propaganda,” MAGA Coalition member Ginger McQueen told the Daily Dot to explain why they were opposing the Q movement so readily. “It will inevitably lead to disappointment and disillusionment in the ranks. At best it threatens [Trump’s] reelection, at worst more people will be hurt or killed in the name of the 17th letter of the alphabet.”

They went after Hayes hard. First, they posted pictures of him posing with officers of the MAGA Coalition at an event, proving that he’d once been linked with the group that both QAnon and he were now smearing as grifters. They also started digging up information on his charity’s tax status, alluding to it being fraudulent—or at best, skirting IRS regulations.

A long thread on Twitter deduced through public records that Hayes lived in Arizona, but had incorporated the charity in Washington in April of 2018, long after he’d become a fixture on the QAnon circuit.

So let’s take a look at this charity. It was formed in 2018 in Washington State, a state in which he was no longer a resident. OK that’s a little odd… pic.twitter.com/SctiG1TPno

Additionally, Hayes appeared to have filed no paperwork with the IRS, as a search of their records showed no charity named after Praying Medic or run by Hayes. The Daily Dot confirmed that while the Washington State Corporations and Charities Filing System does have a tax ID on file for Hayes’ charity (82-5318821), neither it nor Hayes’ name come up in a search on the IRS website. His charity does have a board, but all of them appear to live at the same address, a small house in Gilbert, Arizona.

While Hayes was once a prolific writer of self-published books on “divine healing” and “spiritual warfare,” as well as hosting his own podcast and Periscope channel, his media output now appears to be almost entirely focused on Q – something never mentioned in his recently-filed charity incorporation documents.

It appeared through these records as if Hayes were taking donations and using them to fund QAnon media, as opposed to the charity’s stated mission of “promoting Christian doctrine,” “to evangelize worldwide,” and “the preservation of truth.” While it’s conceivable that Hayes could bundle these nebulous concepts together with QAnon in his “preaching,” a much more concrete matter is his apparent flouting of IRS regulations regarding gift acknowledgment.

A donor to Praying Medic reached out to Daily Dot on condition of anonymity, claiming that they had made the IRS minimum gift of $250 legally required to be acknowledged with a tax letter, but received nothing, and were unable to deduct the donation.

Hayes’ perceived issues with the IRS were a hot topic in anti-QAnon media even before the dust-up with Gorka, with QAnon-deriding Trump media figure Jack Posobiec posting a “blind item” on Mar. 20 about Hayes being under investigation for tax evasion.

Indeed, right around that time, Hayes briefly deleted, then restored his Twitter account. It’s impossible to tell how much Hayes has made via donations, but one number floating around conspiracy theory media puts it at $2.6 million—something that would certainly get the attention of the IRS.

The feud between Hayes and MAGA Coalition has led to a number of anti-Q posters speculating that Hayes himself is one of the people behind QAnon.

Why else would Q use his “platform” to direct followers to “dig” on such a minor operation, unless it was to settle a personal beef—which Hayes appears to have with the group. The identity of the QAnon poster or posters has never been confirmed, though due to changes in posting style, it’s been speculated that the mantle has changed hands several times, possibly recently.

Hayes did not respond to multiple requests for comment from Daily Dot, but did post a lengthy blog entry, claiming that “God asked him” to respond to the allegations, which he did by calling MAGA Coalition a “personality cult.”

He also denied any illegality in his ministry and having any link to Q’s posts. Finally, he removed the PayPal button from his site that allowed users to donate to his charity—claiming he did so not due to an investigation, but as part of a website redesign, though he still refers to himself as “a 508(c)(1)(a) non-profit church ministry.”

Indeed, not all donors to his charity see themselves as having been ripped off.

“I’ve paid for his classes and donated to his ministry,” Praying Medic supporter Judith Nadreau told Daily Dot via email. “I also got a 1099 [sic] from him saying how much I’ve donated for my own tax purposes. He has a tax exempt status for his ministry.”

She’s far from the only Q supporter to defend Hayes, as this reporter was deluged with praise of Hayes (along with threats and insults) after putting out a call for tips from disgruntled Praying Medic donors.

What exactly is to gain by "exposing" one that creates his own YT content by critical thinking, and contributing loyally since the beginning and well loved by 98%? Something happened there, and he's probably stuck on the resolve. Reaching pretty hard. Thought about a hobby man?

Even prolific pro-Q blogger Neon Revolt got in on the act, posting a characteristically long, novel-length post attacking MAGA Coalition’s finances and status with the FTC—while postulating that the whole feud is a faked intelligence operation.

“What if Praying Medic agreed to be framed as QAnon, deny it at first, and then, come out later and “admit” it at a later date?” the post rhetorically asked, putting forth little supporting evidence.

The matter continues to play out on Twitter, and on Discord chats and YouTube streams by both pro and anti-Q conservatives.

Ultimately, while a small Trump PAC and a fringe media figure/faith healer beefing on Twitter might not seem especially relevant, it could hold the key to QAnon’s future as a going concern, along with the large amounts of money it’s bringing in for its apostles. If Hayes is indeed implicated in a charity scam, it would silence one of the most popular QAnon proselytizers. And if it’s taken a step further, and Hayes can be proven to actually be making the QAnon posts (likely as part of a small team of known grifters), it seems likely to put a dent in the conspiracy for good.

In fact, MAGA Coalition members have been celebrating on Twitter that they “killed” QAnon.

QAnon has survived strife and infighting before. Beyond that, studies of past cults and cult-like movements prove that a disconfirmation, such as “QAnon” being only the fevered imaginings of a divine healer/tax cheat, will only make followers dig in harder and commit even more to the ideology. After all, it’s easier to keep being scammed than to admit you’ve been scammed. And many of the people most vulnerable to QAnon’s theories, such older Facebook users who generally don’t use Twitter or streaming apps, likely won’t know any of this happened.

If the scam does get exposed, there’s no telling what angry and cheated QAnon followers might do—or who they’ll take their anger out on.

What happens next with Praying Medic might mean the end of QAnon, or it might mean nothing at all. That depends on the strength of the QAnon movement, and it would be wise not to underestimate it.