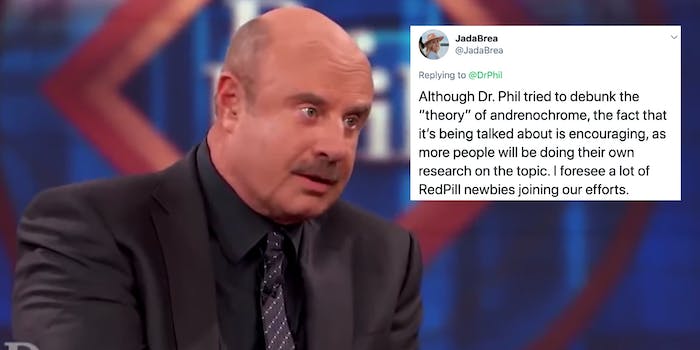 'The fact that it’s being talked about is encouraging, as more people will be doing their own research...'

In a post on Twitter Wednesday, the television personality shared an interview with a woman who claims that her child was kidnapped and tortured by a cult.

The woman, referred to as Sherrie, alleges that her daughter’s 2016 disappearance is “linked to a ritual” that saw adrenochrome harvested from her child’s body.

Adrenochrome, according to the conspiracy, is a drug created by the adrenaline of frightened children and is used by a satanic child trafficking ring consisting of prominent Democrats and Hollywood celebrities.

The drug was popularized by the Hunter S. Thompson novel Fear and Loathing in Las Vegas, which was later made into a film starring Johnny Depp.

Depp’s character states in the film states that the drug can only be obtained “from a living human body,” but the film’s director, Terry Gilliam, has stated that Thompson admitted to making the entire concept up.

While a synthetic form of the drug does exist, it is used primarily for blood clotting purposes outside of the U.S. The claim by conspiracy theorists that the drug produces euphoria, vitality, and hallucinations are entirely fictional.

Despite Dr. Phil pushing back on Sherrie’s wild claims in the interview, conspiracy theorists are viewing the coverage as a victory.

“Although Dr. Phil tried to debunk the ‘theory’ of andrenochrome, the fact that it’s being talked about is encouraging, as more people will be doing their own research on the topic,” @JadaBrea wrote. “I foresee a lot of RedPill newbies joining our efforts.”

But others accused Dr. Phil of attempting to downplay the truth, pointing to his origins as a guest on Oprah Winfrey’s show.

Winfrey is one of several celebrities accused by conspiracy theorists of consuming adrenochrome. The former talk show host was even forced to address such conspiracies on Twitter last March after false claims circulated among QAnon supporters that she had been arrested for child trafficking.

“I can’t trust anyone who rubs elbows with Oprah,” @LindaOtten4 said.

Critics are arguing, however, that Dr. Phil’s segment is doing more harm than good by highlighting a conspiracy theory that has resulted in real-world violence. The FBI has even labeled QAnon as a potential domestic terror threat as a result.

Police in the area where Sherrie lives have stated that no evidence whatsoever indicates that her daughter was taken by a cult.