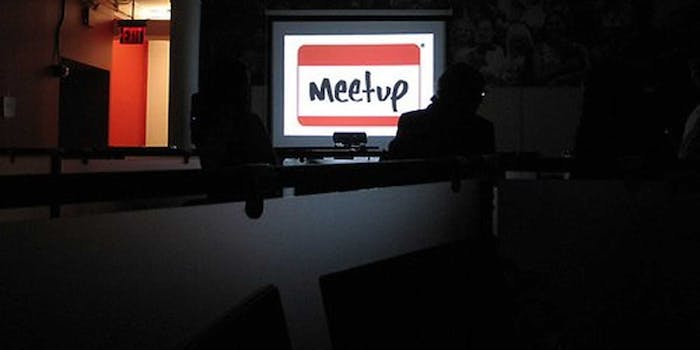 How Meetup got the Internet to start hanging out—IRL

If it weren’t for Meetup.com, I wouldn’t be a writer. I was in London, U.K., for only a couple months when I started using the site to find meetups like Hack/Hackers or Minibar and, that way, got my “break” at a small content strategy company. There are millions of routes into journalism, and Meetup was mine.

Every day, all over the world, people are getting their own “breaks” using the site. Meetup currently boasts 15.92 million members, who rack up an impressive 2 million RSVPs a month. Whatever you’re looking for, whatever it is, there’s a good chance it is happening now, in your city.

Meetup offers people the chance to “meet their others,” the people who share their passions and interests. Or, if you can’t find one that exists already, or you can start your own. The possibility of meeting other people who share an interest in your “tedious” stamp collecting or your “unbalanced attention to frogs” is what has made this 12-year-old website a beloved entity of the Internet.

Scott Heiferman is one of the founders and current CEO of Meetup. He’s a graduate of the University of Iowa, and then headed into advertising. Before Meetup, he founded Fotolog, another social network. Coming up with the idea for Meetup was a combination of “goofing around” with ideas and a sense of community that came after the 9/11 attacks in NYC. Here he talks about Meetup’s origins, as well as where the Internet veteran is going.

What were you doing before Meetup?

I was with one of my co-founders and we were just goofing around with what we might do together. We had this one idea that we’d have an all breakfast cereal restaurant… we didn’t go far with that one.

How did you land on the idea for Meetup?

I used to be in the advertising business, and I realized that I hated it because it was essentially pulling people apart and not bringing them together. A big part of why I started Meetup was I was working in NYC during 9/11, and I had a similar experience to most people living in New York at the time: I ended up talking to my neighbor more in those days afterwards then all my years in the city before. It was a wake up call. The idea for Meetup was to ask the question of if and how we could reinvent local community, in the hopes that a lot of good can come out of that.

Back then, did you have aspirations for the website? And what were you looking to build?

I did yes, it was the reason I chose Meetup to work on. I thought it had a whole lot of potential and could be something great. However, I didn’t know it could achieve this kind of success; I didn’t understand that it really could be used by everyone, so initially I thought it would be a small, niche platform for various freaks and geeks [laughs]. But then I realized that actually what we were tapping into was quite universal: the struggles and dreams and aspirations that people have for all kinds of things in their lives, the meetups they have. How do you find your people?

How do you think it compares to other event websites, or those which have events built in, like Facebook or Eventbrite?

Its funny that you say “event sites.” I guess you’re right, to some degree, that that’s what it is. But I’ve never thought of it that way, or used that phrase, or even come near to thinking of it in those terms. We think it’s [a] community site. You know I said “how do you find your people?” earlier, which is an old Timothy Leary quote. It expresses a little bit what Meetup is about. You can buy tickets at Eventbrite or go to Birthday parties on Facebook, but a meetup is a special kind of event, where you actually set out to find people. We’re in the business of helping you find the people you don’t know yet. That’s the exciting stuff that happens at a  meetup. 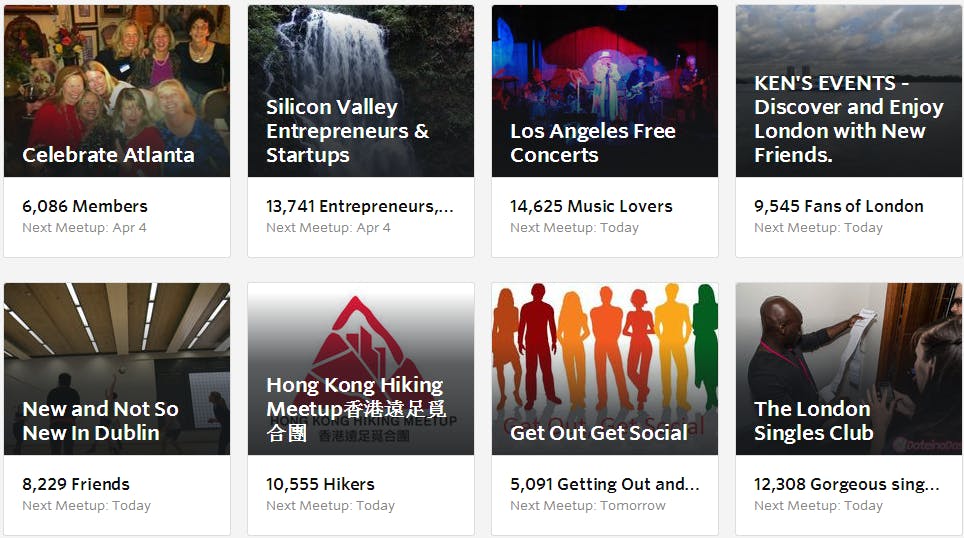 Look up what’s happening in London: The next meetup is the London Pro Bono Accountants meetup. So that’s accountants that want to give their time to pro bono work, but they’re also a community. It’s not just their charity work, but they can help each other when need be. It’s really amazing. Pierre Omidyar, one of our investors, said “people are generally good,” and by connecting them within the context of a meetup, it unleashes a lot of good.

How have you seen it evolve over the years?

Most of what we thought people would meetup about about was wrong, and what we didn’t think they’d do, they did! It’s always evolving: Lots of meetups fail, and lots of them succeed. It’s a wild ecosystem of what turns people on, and what speaks to them, and, ultimately, what’s important to them.

From the get-go we had meetups [for] Pagans and ex-Jehovah’s Witnesses. It really showed that we were making something that fulfilled a need. It’s same with, for example, Uber here in America or Hailo in the U.K.: People need it so it takes off. We knew that people would want to talk, to commiserate, and that they hadn’t previously got an opportunity like this to get organized. In fact, right now our number one category is “new moms.” You might say it’s easy to find other new moms, but it isn’t. Helping people find others like them is actually very simple, but there’s a huge demand for it.

It sounds like you pay close attention to what meetups there are on the website. Do you use that information to improve the site?

We don’t design the platform for anyone, we’re just hacking away to make it easier and easier to find people so the website grows. We don’t customize it for different categories.

What have been the tenable things that result from a meetup?

We get stories everyday of people who started new careers because they went to a meetup. They start to feel that this is how the world should work, a community that’s welcoming and friendly, and you can drop by and people will help you out, if you’re open to it. Not just careers  but also to find business, people, investors, and employees. And we get tons of stories of people finding friends, learning new languages, or getting fit and losing weight. We’re in the business of helping people do that.

It seems like a fundamental thing, finding people with similar interests to you, why did it take 12 years for people to start getting that?

Well it’s funny you say that because a couple nights ago I was at a meetup and I was talking to someone who asked when we started. I told him 2002 and he said “Um.. is that… is that when the Web started?” The Web is a bunch of years older than we are, but it’s easy to lose perspective on these things. It also makes sense: When you break it all down, the Internet is supposed to be good at just a few things: to help us stay in touch with our friends better, using sites like Twitter and Facebook, to be able to buy stuff, like Etsy, and Amazon, and to “find your people,” like we do. Ultimately, it’s a short list.

In another interview, you said the Internet had to be ready for Meetup. Is it ready now?

No, I don’t think so, because we’re trying to shake off the notion that meeting a stranger is scary. You know, five years ago the idea of something like Airbnb, that people would go and stay in other people’s homes, would’ve been called ridiculous. [The market assumed that people] wanted the comfort of a consumer experience. There’s been a culture that people on the Internet don’t want to interact with other people face-to-face. What is happening right now is this “sharing economy” is taking off, with things like Uber or Lyft. In our case, it’s sharing people. And yeah it’s kind-of taking off, we’re growing faster than ever, but it won’t be that fast until this cultural ice age thaws.

Do you see any other companies that are trying to achieve the same things you are?

There’s a company called Nextdoor here in New York to help you get to know your neighbors, unleashing community, which I really like.

With this new growth, are there any changes you’re working into Meetup, if it needs them?

I can’t reveal too much, but right now we’re looking at the bigger groups and how they make money and ultimately a business out of their meetups. We’re looking to make it possible for meetup organizers to charge annual dues to a member. It creates an entrepreneurial economy, like Airbnb has done, and we want to help that along.

One day we want to see a meetup everywhere, on almost everything. If money is flowing around that ecosystem it’ll begin to blossom into potentially powerful, amazing organizations.