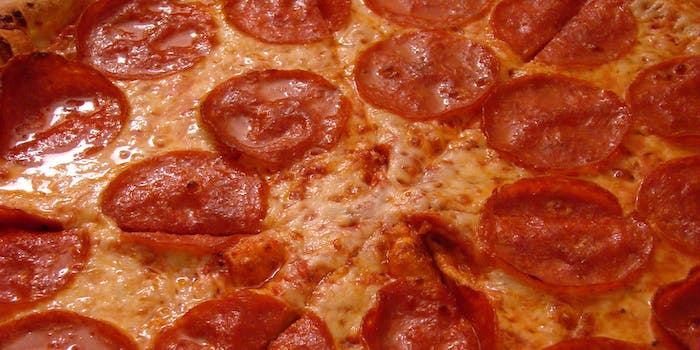 When you hear about a 19-year-old entrepreneur who founded an app for, say, playing Flip Cup, or taking secret photos of women on the beach, your first instinct may be to puke in your mouth a little. But the 19-year-old founders of a new app launching Tuesday evoke an enitrely different reaction.

That’s because these guys have created what will probably forever be known as the greatest app of all time: Push for Pizza, a pizza delivery app that, as the name clearly states, literally lets you push one button for pizza.

Here, let these adorable, gangly teens—Maximilian Hellerstein and Cyrus Summerlin of the NYC-based apparel line Dead Heart—tell you more in this (actually kind of charming) promo video for the app:

The premise of the app is simple: It’s basically a streamlined, more efficient way to order pizza on your phone.

Basically, Push for Pizza links up to all the pizzerias in your area and allows you to select from two choices: plain, or pepperoni. (Mushroom-and-green-pepper enthusiasts are unfortunately SOL for now).

After you’ve entered your address and credit card information, the app automatically delivers pizza to your door. (Provided you don’t order at 9 am—a.k.a. a time when absolutely zero pizza places are actually open, which is when I tried out the app. Smart!). It even enters the tip for you.

Of course, Push for Pizza isn’t exactly relying on revolutionary pizza delivery technology. And in terms of the originality of the idea itself, it pales in comparison to the last pizza delivery app we wrote about, the Pizza Counter, which calculates exactly how much office your workplace or home will need based on your group’s hunger quotient.

Plus, there are already a number of apps on the market that already offer a one-button solution to the ordering process, such as the PiePal, an “emergency pizza button” that lets you order a preprogrammed pizza from Domino’s, and the Red Tomato Pizza magnet, a push-button magnet that allows you to order a pie from the Red Tomato Pizza chain in Dubai. But were any of these gadgets invented by adorable, gangly teenagers with rudimentary programming skills and one simple, beautiful dream of not having to enter their information into Seamless every time they get stoned and try to order from Papa John’s? Nope, didn’t think so.