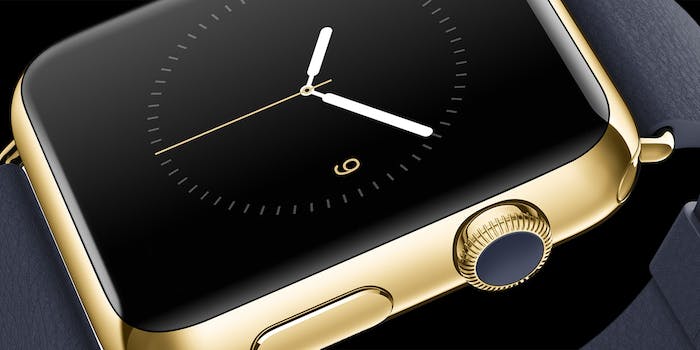 The public won’t accept smartwatches until they can blend in

The problem with smartwatches is obvious, just not to the companies who make them.

Apple has a long history of entering a new market and completely upending whatever companies were previously ruling it. The iPod destroyed CD players and the Walkman; the iPhone ended the reign of Blackberry.

After unveiling the upcoming Apple Watch last week, two things became clear regarding the smartwatch industry: Firstly, even as smartwatch design has dramatically improved over the past year, there is still a long way to go, and secondly, traditional watchmakers are right not to fear the Apple’s smartwatch.

There seems to be a substantial gap between what people expect in a smartwatch and what many tech companies are creating. Companies like Samsung, Motorola, and Apple are seemingly trying to solve a problem that doesn’t exist.

Unlike recent technological advancements, there are no major issues smartwatches are solving. There are no ease-of-use issues, which helped MP3 players overtake CD players, or life-altering benefits that smartphones provided over feature phones. Unlike with CD players and feature phones, most people have no overarching qualms with watches in their current state.

Despite that knowledge, companies keep focusing on adding features they believe will sell consumers on smartwatches. Yes, some of these features are great and useful, but they aren’t needed, and features for features’ sake alone won’t entice the public at large to spend hundreds of dollars on another gadget.

What has been overlooked is the surprisingly large amount of people who still buy watches. In 2013, 1.2 billion wristwatches were sold, in comparison to the 967 million smartphones sold in the same year.

Clearly, we still want to buy watches. Not simply for the function of telling time, but because they are fashion accessories, or because of the heirlooms they can become. The enjoyment of a watch is largely derived from design, or from the memory it may invoke, not its function or features.

I spoke with a number of watchmakers for the latest issue of The Kernel, and while trepidation about smartwatches is apparent in those who sell watches under $150, most of the companies who create watches over that price are aware of the possibilities, but not fearful in the least.

“But for objects appreciated for other reasons—aesthetics, tradition, artistry, style—the classics tend to endure. Like the appeal of wood and leather over plastic and nylon. Lasik and contacts have yet to take down glasses. Velcro is superior to shoelaces in almost every way, but most people over the age of five still lace up.”

The problem with smartwatches is not their functionality, which is slightly above average for the first generation of a product, the issue is grounded in design. As a person who wears watches regularly, no one—not even Apple—has made a smartwatch I would wear every day.

The best analogy for the needed evolution of smartwatches is the electric car company Tesla. The greatest thing Tesla has done is blend in with gas-powered luxury vehicles. Sitting next to other luxury cars like Mercedes-Benz and BMW, Tesla doesn’t stand out in the least as an electric car.

Tesla’s craftsmanship is on par with its competitors, the design is what’s to be expected from a car over $70,000, and the ride quality is equally smooth. You wouldn’t notice you’re sitting in one of the most technologically-advanced production vehicles in history, and not your average luxury sedan, until it’s time to refuel.

And that is what’s missing from smartwatches. No smartwatch maker has made something that can blend in as a traditional watch. You could never forget you’re wearing a smartwatch. They are either too big, too ugly, or too square. (The percentage of square watches sold are paltry in comparison to round watches, which should have been the first indication for companies like Apple to go with a round design.)

No one is clamoring for a reinvention of watch design, yet that is what has been forced upon us. Smartwatches won’t find true success until a company can build one that can match the design qualities of a traditional watch.

There are no must-have features for a smartwatch right now. There is nothing a smartwatch can do that your smartphone can’t. Your CD player had a limited number of songs it could play at once. Your feature phone couldn’t access the full power of the Internet. There is no killer use case for smartwatches. It is a luxury item that hasn’t even come close to achieving the hallmark of nearly all luxury items—good, if not great design.

The smartwatch has to become a timeless fashion piece—not something that will be outdated in two years. It has to be something that you would wear everyday, whether the battery is fully charged or completely dead, for the simple reason that it looks great. Only then will smartwatches fully capture our attention, and our wrists.