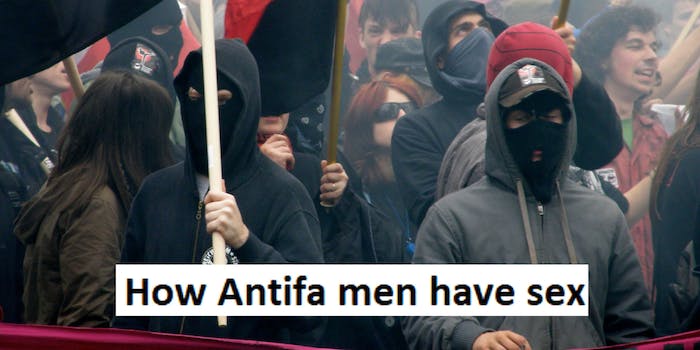 Is it just a 'spicy meme?' Or is it sexual insecurity?

Do you take the strap? If you think President Donald Trump is the best president in U.S. history, probably not.

Twitter pinned the problem Wednesday evening after user coherentstates shared a meme titled: “How Antifa men have sex.” The meme has a small image of Donald Trump with the caption “thedonald.win / SPICY MEME.” The image shows a man in a blue baseball cap being anally penetrated by a woman in a schoolgirl outfit.

“Stop threatening us with a good time!!” coherentstates jokes.

“I fail to understand how this is bad in any way,” one Twitter user wrote.

“I am a part of antifa now,” another said.

The Daily Dot was unable to find the original right-wing version of the meme on thedonald.win, Trump fans’ clone of their popular, but censored subreddit. However, the punchline can be seen on a post from r/The_Donald dating back to 2017. Coherentstates claims she came up with her viral tweet after seeing the image on a fascist trans woman’s Twitter page.

“I actually saw it posted on a fascist trans girl’s (yeah i know) Twitter account and of course thought it was unintentionally great,” she told the Daily Dot. “She used to have a much bigger account but she keeps getting suspended for posting really outrageous shit.”

More often than not, the bull is a Black man.

Hence, why they are trying to paint antifa with it.

“I always found it hilarious how every other post on popular subreddits [are] some variation of ‘yOu sHOUlD tRy pEgGinG/prOsTAtE sTiMuLatIOn gUys’ or my favorite, ‘don’t feel bad guys, large penises are uncomfortable for sex,'” a thedonald.win poster states. “The frequency with which it comes up kills me lol.”

“I think it’s just having a lot of insecurity and using your bad politics as a way to cope with it,” coherentstates said.

The host of YouTube video essay series Flower Guardian, Rose, notes that the “fascist mindset” involves fascists “viewing themselves as both victims and noble warriors and their enemies as both weak and unimaginably powerful.”