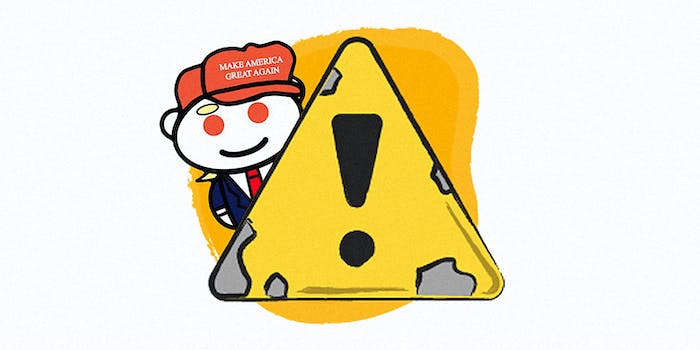 Why is Reddit allowing a more extreme version of r/The_Donald to be revived? (updated)

A newly revived subreddit known as r/Mr_Trump is being promoted by r/The_Donald's moderators.

Members of Reddit’s r/The_Donald have begun promoting a separate subreddit as the popular pro-Trump forum prepares to enter its fifth month under quarantine.

In a sticky post on Wednesday, Reddit user and r/The_Donald admin u/joshhawley2018 called on users to join a newly revived subreddit solely dedicated to memes.

Known as r/Mr_Trump, the forum, which joshhawley2018 is also a moderator of, was once at odds with r/The_Donald but has since joined efforts to support the president.

“As most of you know, Mr_Trump was the spicy stepbrother to The_Donald because of some old drama that doesn’t matter,” a post on Mr_Trump states.

In 2016, thousands of Trump supporters left The_Donald to join Mr_Trump over numerous disagreements, including allegations that The_Donald had been taken over by “cucks” and “shills” supportive of censoring controversial content.

Described at the time as “the #1 Alt-Right, most uncucked subreddit,” r/Mr_Trump was eventually made private in 2017.

Despite being dormant for years, another moderator for the forum, u/shadowman3001, stated this week that r/Mr_Trump was reborn thanks to Reddit’s Zombie Subreddit challenge.

“The reason Mr_Trump was reopened is that I received an invite to participate in the Zombie Subreddit challenge from Reddit, and I submitted Mr_Trump to be revived, and they surprisingly allowed it,” he said.

Questions have arisen as to whether the new subreddit is merely an attempt by the r/The_Donald to evade its quarantine, which was implemented last June after members issued “threats of violence against police and public officials.”

The posts were made in support of Republican senators in Oregon who went in to hiding to ensure a carbon cap and spend bill would fail. Visitors to the subreddit now receive a warning before they enter.

Reddit user u/Satire_or_not, who was one of the first to flag the reemergence of Mr_Trump, told the Daily Dot that the two subreddits are essentially the same.

“Mr_Trump and The_Donald are subreddits that were working together in the past and then they decided to combine all their users into The_Donald and make Mr_Trump private so users were forced to migrate,” Satire_or_not said. “The Moderator on The_Donald that announced Mr_Trump was open again is a moderator of both subreddits.”

Both r/The_Donald and r/Mr_Trump share many of the same posts, rules, and moderators. But those moderators are quick to claim that Mr_Trump is a separate entity.

“Mr_Trump is going to be non-stop memes. Nothing else!,” shadowman3001 wrote. “No comments, no text posts, no articles, just memes. News, discussion, etc have a home on The_Donald. Obviously this doesn’t mean no memes on T_D, nothing is changing over there.”

Whether r/Mr_Trump becomes popular among the president’s supporters on Reddit though remains to be seen. While r/The_Donald currently boasts over 780,000 members, r/Mr_Trump has only garnered a little over 25,000 members so far.

Update 3:43pm CT, Nov. 15: A Reddit spokesperson released the following statement to the Daily Dot, asserting that the r/Mr_Trump subreddit has been banned.

“We are clear in our site-wide policies that attempting to evade bans or other restrictions imposed on communities is not allowed on Reddit,” the spokesperson said. “The subreddit in question has been banned in accordance with this policy.”