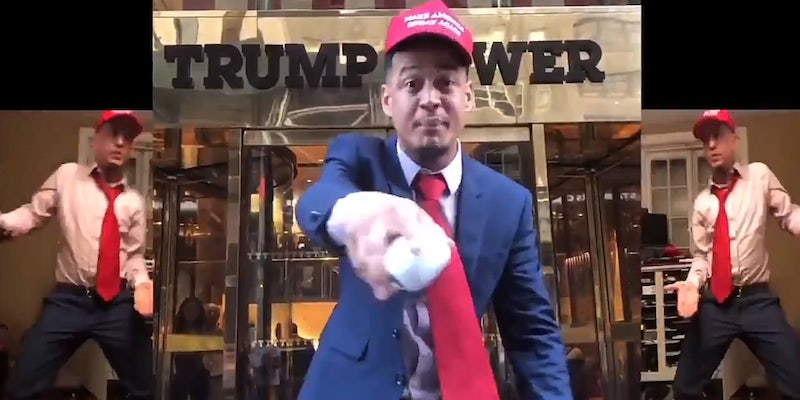 President Donald Trump and the hip-hop community have a unique history. With rappers such as T.I. and Nipsey Hussle railing against Trump in songs and the public square, the president has also earned support from hip hop mogul Kanye West.

When West left the scene for a period of political silence, young amateur “MAGA” rappers felt it was their void to fill.

A newly dropped tune, popular among the MAGA crowd by Bryson Gray is called “WallGoinUp” and it features lines such as: “gotta phone call from Trump, said the wall going up, Democrats try to stop it, hardly enough, they said they wouldn’t fund it, Trump calling their bluffing.”

Known to the most loyal Trump social media fanatics as the “MAGACHALLENGE” (Make America Great Again Challenge) and the “KAGCHALLENGE,” (Keep America Great Challenge), the hashtags serve as a string that connects “aspiring” pro-Trump rappers who seek to grow their followings.

The young rappers hope their mixtapes climb the Trumpworld Twitter food chain to collect retweets and likes from MAGA fan accounts, getting up to loyal Trump personalities, with the hope of it finally achieving a retweet and approval from Trump himself.

Bryson Gray, the founder of the “MAGACHALLENGE,” who is also a pro-Trump amateur rapper, started the hashtag with the hopes it will lead to a cultural change in the way young people perceive the Republican Party. The hashtag was launched just last month, in early September.

The momentum of Gray’s flagship rap song, “MAGA Boy,” was fueled by a shoutout from Trumpworld character and self-proclaimed best-selling author, Angela Stanton-King, alongside a challenge for others to mimic him on her Instagram account.

In an interview with the Daily Dot, Gray says some of his most popular songs include “MAGA Boy,” “Trump is your President,” and “Black, not Democrat.”

Gray admits that not all of his new Twitter followers are from his influential music hitting a cord with Trump personalities, noting that Trump personally thanked him for wearing an oversized styrofoam MAGA hat to a rally, which garnered a great deal of attention.

When Gray attended a Trump rally and sported the oversized MAGA hat, he told a local reporter that the pure size of the cap makes it double the importance. The oversized cap that blocks spectators’ lines of sight at rallies has become popular among Trump’s most loyal supporters.

The outspoken Trump supporter, who recently performed his raps at Turning Point USA’s “Black Leadership Summit,” argues that all of his favorite rappers are “anti-Trump” and that “someone needs to make pro-Trump music.”

“I think the MAGA challenge is doing what everybody expected Kanye West to do for the [Trump] campaign,” Gray told the Daily Dot. Gray says he sees his music as a way of “easing the tensions in the culture and helping get the word out about Trump,” while further declaring that “not all Trump voters and GOP are stick ups.”

Gray believes all of those who are contributing rap renditions are helping gain support for Trump’s 2020 re-election efforts.

This call for conservatives to be heavy users of social media is similar to the demand made by Sebastian Gorka recently, who told Trump supporters at the Values Voter Summit that if they’re not on social media acting as a “force multiplier” by being online “every single day,” they are then “part of the problem, not part of the solution.”

Similar to Gorka and other conservative commentators who sell products to fund their schemes, Gray has turned to selling $20 T-shirts with a picture of himself and his oversized MAGA hat.

Another way Gray is promoting his mixtapes is by appearing on InfoWars, the conspiracy site run by Alex Jones, which has a series of internet streaming talk shows.

Another Trump rapper, Henry Davis, who raps with a cardboard cutout of the president, also appeared on an InfoWars show.

Even Isaiah Washington, an actor on the hit TV show Grey’s Anatomy has also taken the opportunity to get in on the challenge.

Other far-right “red-pilled” commentators have also served as inspiration for the creation of bars claiming Black Democrats are being held “captive” on a plantation by liberal politicians.

Trump-friendly personalities such as Diamond and Silk have shown their support for amateur rappers across the internet who are praising the president.

The Media don't want you to see this……. https://t.co/aJkYy0bdBq

While amateur MAGA rappers might be taking Trumpworld Twitter by storm, the president has yet to retweet or amplify their tunes.

In their eyes, much work is still necessary to make MAGA rapping a bigger part of the culture.