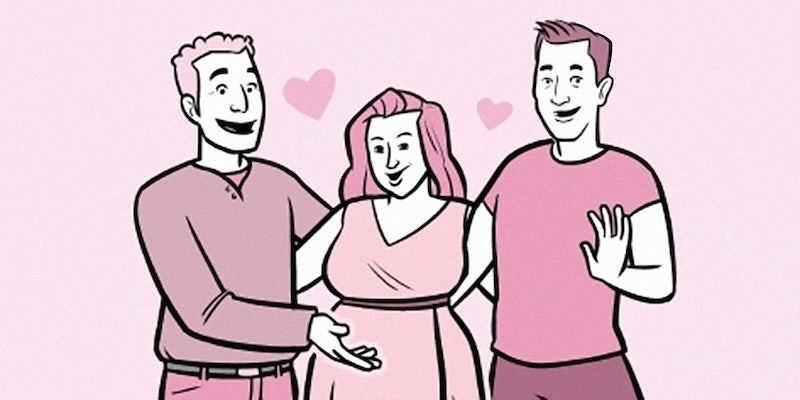 Cuckolding is much more complicated than three people having sex.

(Warning: The following material and links are NSFW.)

For example, in one of Oh Joy Sex Toy‘s latest renditions, cuckolding features front-and-center through a white trio enjoying a cuckolding relationship. Except there’s a problem: The internet thinks Moen and Nolan’s handling of cuckolding glosses over some of the kink’s dangerous stereotypes and dark past—one deeply rooted in racism.

Cuckolding is a sexual fetish where one’s sexual partner has sex with another person. It’s a consensual fetish—the “cuck” gives consent for the “bull” to have sex with their partner. If done correctly, everyone has a good time. And it’s a particularly common fetish, too.

But that’s where things start to fall apart with Oh Joy Sex Toy‘s look at cuckolding. An ongoing joke throughout the comic is that the bull keeps degrading the cuck, telling him to “shut up and get the fuck out” while he’s explaining what it means to be a cuck. In reality, as Refinery29 points out, cuckolding isn’t always about pure humiliation.

“People experience this kink to different degrees,” writer Sophie Saint Thomas explains, “so you certainly don’t have to take another person home and lock yourself in a cage while they enter the bone zone with your partner.”

okay but maybe the funniest part of the cuck comic is how poorly craig's design sells this description pic.twitter.com/oGuaa9EDyW

There’s also the fact that Moen and Nolan encourage readers to take relationship jealousy and “sexualize it,” noting that “by playing with the things that scare us, we feel like we can control them better.” This isn’t always true, and it can be a very dangerous mindset. That’s one thing NYC sex therapist Madeleine Castellanos discusses with Refinery29: feelings of jealousy can develop, souring a relationship.

“If your partner is actually having sex with someone else, your jealousy could kick in, and you could develop jealousy or resentment, even if it’s something you’ve agreed upon,” Dr. Castellanos warns. “When people pull off this fantasy, it can be very successful. Of course, it’s wrought with danger.”

Granted, Moen and Nolan embrace the fact that not all cuckolding dynamics are based in humiliation or explicit power dynamics. But it’s a little misleading to focus specifically on that, when the kink itself is so much more complicated.

So that power dynamic of humiliation, control, and sexual desire plays into racist beliefs. And it gave birth to a pretty serious form of racism from the far-right: calling people “cucks.”

According to GQ, “cuckservative” emerged as a term to insult Jeb Bush-style conservatives, who were deemed too “weak” and “effeminate” for the party. The insult plays into a long history of white supremacists radicalizing whites “with the fear of black men raping white women,” an image all too familiar to any film student who has seen The Birth of a Nation. As an insult, Schwartz calls it “a concept borne out of insecurity,” and a fear that “one is inadequate, sexually or otherwise, and that inadequacy will lead to the loss of the things that are important to him.” In other words, conservatives call people “cucks” because they think white Americans are giving people of color too many civil rights.

This is a huge problem that significantly impacts how the cuckolding kink functions. It means a core part of cuckolding’s humiliation is founded in racist imagery. And when a huge part of the cuckolding genre embraces racism, then it starts to pollute the kink.

But is that Nolan’s call to make as a white person? The comic isn’t even engaging in people of colors’ experiences with cuckolding; the Oh Joy Sex Toy strip focuses on white partners. Men of color looking to engage in any form of cuckolding play will have a very different experience because of the role that fetishization and racism play throughout the kink. By comparison, white men don’t have to worry about racial undertones while playing the bull; black and white people experience cuckolding in two totally separate worlds, and it’s something Oh Joy Sex Toy washes over.

My problem w/ OJST is that kinks are messy, complicated. Not everything whimsical shlorp shlorp gooey wonderland one page comic material.

Cuckolding is a complicated sexual fetish, and to write about cuckolding means having a frank conversation about racism’s role in cuckolding material. If you’re white, it’s easy to see cuckolding as a fun, carefree kink that anyone can join. But people of color have a much more fraught experience with the kink. And when it comes to deciding whether or not cuckolding is racist, well, that’s a discussion that should be deferred to people of color, not white webcomic writers.