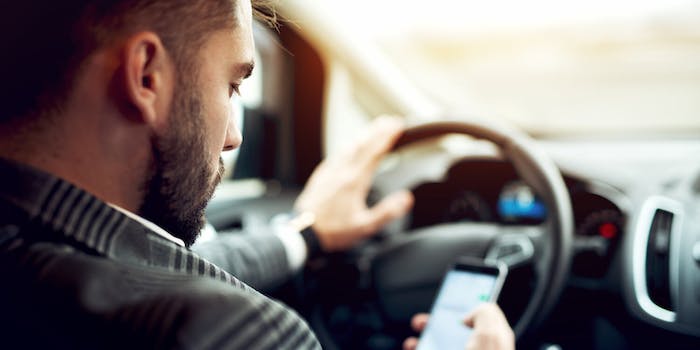 OnMyWay pays drivers to put down their phones, but at what cost?

This app will pay you to put your phone away, but at what cost?

Since the early 2000s, distracted driving has been the topic of several PSAs and dramatized commercials for safety initiatives. A new app called OnMyWay is taking things to a new level by offering a major incentive for drivers to stay safe.

OnMyWay literally pays you to put your phone down while driving; it rewards users for leaving their phones locked while driving. The app pays you five cents per mile, with an additional two cents for every person you refer to the app. Sounds like a sure thing; why not make some money for non-distracted driving? But there are some strings attached. Here’s everything you need to know about the OnMyWay app.

There are other apps like OnMyWay, like Sweatcoin or Lifecoin, that track activity and reward users with pay-outs. These apps function by tracking users’ locations and storing data about where they went, how long they stayed stationary, and other such information. Usage data is also collected. According to the OnMyWay app site, the app automatically detects when a driver goes faster than 10 miles an hour.

This means that the app is tracking users’ locations in the background when it is not open and in use. It keeps tabs on where you are, how fast you’re going, and when you start driving.

OnMyWay records when your phone is locked and unlocked, which is how you get “paid.” However, it also records users’ street addresses, email addresses, dates of birth, and images of their drivers’ licenses. The app doesn’t sell the data, but OneZero quoted co-founder Chloe Palmer as saying that advertisers get to peek at it if they purchase space to place a “deal” (effectively, an add), in the rewards section of the app.

On My Way app: Data-collecting and advertising

OnMyWay drivers are rewarded with five cents per mile for not touching their phones. But one dollar earned in the app does not equal a one-dollar payout. For every “dollar” of OnMyWay Cash earned, users can take home 10 cents, effectively getting rewarded for two miles out of every 20 they drive.

This cash isn’t deposited into your bank account; instead, users redeem what they earn in the “deals” available in the app, which are essentially coupon codes purchased by advertisers. According to reports, the app has several low-tier deals which range from $10 to $100. However, deals can sell out, and users need to wait for them to be available again… and then they might sell out again in a matter of hours.

Higher-tier rewards necessitate upward of 20 referrals and driving tens of thousands of miles. According to the OneZero report, in order to redeem a $1,000 deal, users would need to drive 100,000 miles and refer 50 people.

What does this all add up to?

Apps like OnMyWay have been around for years. Predecessors such as Pocket Points and the aforementioned Sweatcoin and Lifecoin make money by potentially offering up user data to advertisers and using ads to fund their apps. Identifying information like names, emails, addresses, profile photos, and even app usage is collected. Pocket Points, which targets students and rewards them for not being on their phone in class, outlines in its privacy policy that any information collected on users is kept indefinitely.

Most of the apps listed here follow this model, collecting identifying information on their users and giving it to advertisers in order to fund their app, except for Sweatcoin. Because it is based in the U.K., Sweatcoin is subject to data collection rules outlined by the European Unions General Data Protection Regulation. Data collected by the app is given with direct consent from users.

So what does all this mean? Apps like OnMyWay for the most part, are giving advertisers access to your personal information in order to advertise better to their user base. Of course, whether you want to give away your data for pennies on the dollar is up to you.