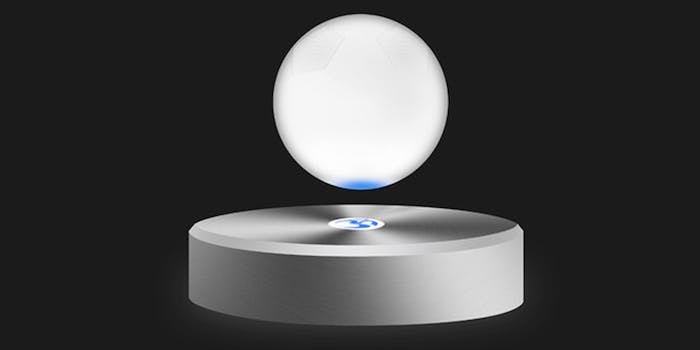 The Om One is a Bluetooth-enabled speaker that levitates

There are a few qualities we all want in a personal Bluetooth speaker—crisp sound, good battery life, and effortless connectivity are all a great start—but the ability to levitate usually isn’t one of them. Nevertheless, Om Audio has crafted a powerful piece of portable audio equipment that defies gravity in stunning fashion while pumping out your favorite tunes.

The Om One is a perfectly round orb that measures 3.6-inches in diameter, sporting several speaker grilles on its brushed metal exterior. It looks a bit like a futuristic baseball. On its own, it’s not a particularly striking piece of hardware, but once paired with its magnetic base it becomes something futuristic and downright awesome.

The magnetic qualities of the base give lift to the speaker, and thanks to the wireless wonders of Bluetooth, you can sync your smartphone, tablet, or computer with the device to play whatever audio you desire. The speaker can be used with or without the base, and its built-in battery is good for approximately 15 hours of use between charges. It also features a built-in microphone that Om insists makes it fantastic for a conference room.

At the moment, Om needs crowdfunding support in order to wrap up development of the final Om One prototype and begin production of the consumer version. With 49 days remaining in its campaign, the California-based company has raised over $41,000 of its $100,000 goal, so chances are pretty good that it will be a success.

Without a unit sitting on my desk right now, there’s no way of knowing whether the Om One will crank out the kind of sound that would make it worth its current $179 asking price—the device will retail for $199 at a later date—but Om’s track record does include a pair of award-winning earbuds, so that’s a good sign.

Oh, and if you’re feeling a bit like John Travolta in Saturday Night Fever, you can even order an Om One decorated like a disco ball. That’s right; A gravity-defying disco ball that plays music. What a time to be alive.