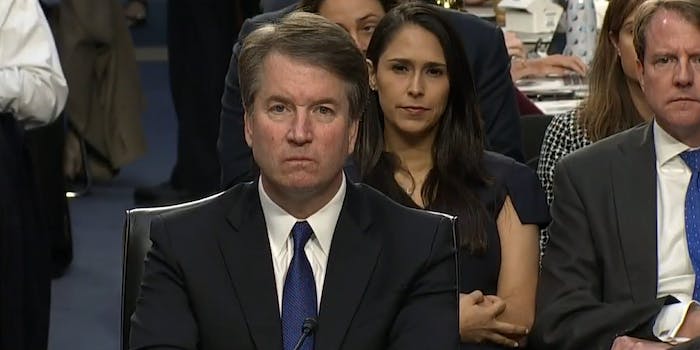 Her husband cleared the air.

Tuesday’s opening hearings in the Senate for Brett Kavanaugh, President Donald Trump‘s pick for the Supreme Court, were full of very public fireworks.

But it was something subtle that caused an enormous amount of drama online. Seated behind Kavanaugh at the hearing was Zina Bash, a member of his staff. And how she was holding her right hand raised some eyebrows.

Is this woman Zina Bash throwing a white power hand signal?? It sure looks like one pic.twitter.com/k6pIecZwTn

Bash was spotted with her thumb and forefinger making a circle, a gesture that—prior to the world falling into a conspiracy wormhole—was universally known as “OK.”

But President Donald Trump often makes that symbol during speeches and rallies, and pranksters on 4chan tried to trick reporters into believing anyone making it was flashing a symbol for white supremacy, one basically akin to saying “Heil Hitler.” When two far-right internet personalities, Mike Cernovich and Cassandra Fairbanks, made it at the White House Briefing Room last year, the situation devolved into a mess of accusations and lawsuits.

As it stands, the gesture can be a nod toward far-right views, if the person making the OK sign is—at the time they are doing it—also attempting to wink and nod at the far-right. If a person isn’t doing that, then it’s just how someone is holding their hand, and it’s entirely meaningless.

But a couple prominent Twitter users jumped on Bash’s hand placement, tweeting out that a member of Kavanaugh’s staff was attempting to endorse white supremacy in a very public fashion. Adding fuel to the accusation was that Bash was part of Trump’s team that implemented the Muslim travel ban and has worked for the administration on immigration issues.

The story picked up such steam online that Bash’s husband came to her defense and denied it, pointing out Bash’s nationality and heritage. (She was apparently born in Mexico.)

Most everyone involved deleted their tweets about it, apologizing for jumping to conclusions.

Day two of the Kavanaugh hearings is on Wednesday.